In the past week, the idea of canceling student debt has been a topic of considerable debate on social media, in our nation’s op-ed pages and news outlets, and even during the first presidential primary debates of the 2020 cycle. Sparked by dueling proposals from Sens. Elizabeth Warren and Bernie Sanders, and by years of tireless work by student and borrower advocates, the idea of simply writing off some, or all, of the $1.5 trillion student debt in the economy is now a serious public policy discussion and should be celebrated accordingly. This is especially exciting given the role that student debt cancellation could play in ensuring generational and racial economic justice.

There has been considerable confusion or conflation between the plans proposed by Sens. Warren and Sanders, so it’s worth stepping back to acknowledge what each plan would do. Senator Warren proposes eliminating up to $50,000 in student loans for everyone with household income of $100,000 or less per year. People in households earning above $100,000 per year would receive roughly one-third less in debt cancellation for every dollar of household income above $100,000. Anyone with household income above $250,000 per year would not be eligible to have their loans forgiven.

Senator Sanders has proposed wiping away all student loan debt for borrowers who currently have it. His plan can be reasonably described as a $1.5 trillion economic stimulus for those with student loans. Both senators have proposed similar versions of tuition-free college going forward, while Senator Warren has also called for a large increase in Pell Grants to cover the non-tuition expenses that students take on debt to afford.

It is vital to remember that for about 75% of those with student loans, the plans’ impact would be exactly the same.

Despite the slight differences in design, it is vital to remember that for about 75 percent of those with student loans, the plans’ impact would be exactly the same. This is because three-quarters of student loan borrowers have less than $50,000 of student loan debt and have household incomes well below $250,000 a year. Warren’s campaign estimates that her plan would offer some forgiveness for around 95% of all student loan borrowers, meaning both plans are functionally the same for an overwhelming majority of borrowers.

To the extent that there are policy disagreements and distinctions between the Warren and Sanders student debt plans, they stem from the group of borrowers who receive total cancellation under the Sanders plan but only partial, or no, relief from the Warren plan. This makes up about 25 percent of all people with student debt. Given the design of the Warren plan, this consists of two categories of borrowers:

It is for this reason that Senator Warren’s plan limits relief by the amount of debt and household income. As a result, her plan would provide broad relief while narrowing the black-white wealth gap. Previous research from Demos and the Institute on Assets and Social Policy has shown that canceling all debt would widen the racial wealth gap, since high-debt, high-income borrowers are disproportionately white. Targeted relief can narrow the wealth gap.

Of course, household income is only one way to measure financial well-being, and many borrowers with high graduate school debts are struggling to offload that debt in some way. They may be able to meet monthly payments but may be putting off all manner of activities that would benefit themselves and the economy. In addition, among those who make it to college and beyond, African-American borrowers are overrepresented among those with more than $50,000 of debt. 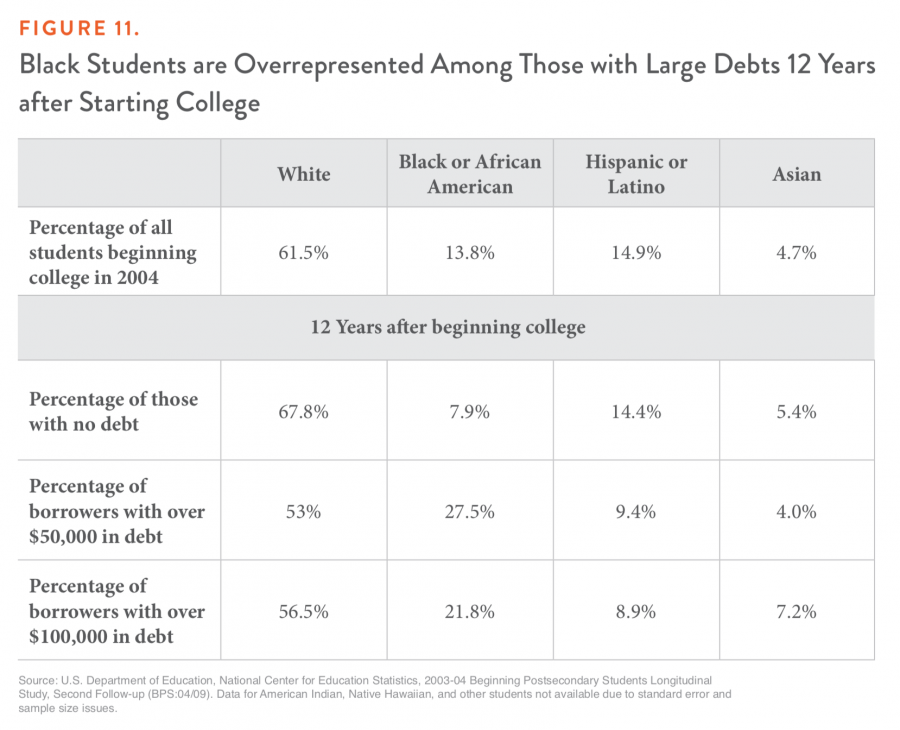 It is also potentially simpler to communicate a policy of total cancellation rather than one that works on a (relatively simple, but still) sliding scale. That simplicity comes at the cost of offloading the debt of a group of high-income, disproportionately white households.

Both the Sanders and Warren plans have been met with considerable enthusiasm since their respective announcements. And given their similarities, both plans have come under similar pushback from a few distinct camps who might otherwise be amenable to spending more resources on borrowers (and higher education more broadly). For simplicity’s sake I have labeled these camps progressive and technocratic. The general contours of these arguments are as follows:

This debate is sure to rematerialize over the next few years and beyond. In the spirit, I have outlined several questions that I think would be worthwhile for technocratic critics of debt cancellation to answer. These include:

While I remain broadly supportive of student debt cancellation, there are some very reasonable questions that we should answer if we’re going to maximize the impact of such a policy. They include:

Undoubtedly, many more questions will surface as this idea continues to weave its way through the 2020 discussion and beyond. The plans put forward would provide almost incalculable benefits for struggling borrowers, those whose debt is preventing them from getting ahead, buying a home, starting a business, or taking care of family. The plans also would benefit from continued scrutiny, particularly as it pertains to racial equity and durability. That this discussion is happening speaks to the issue’s importance and a renewed concern about what we owe this generation of students, borrowers, and beyond.

Bridging Progressive Policy Debates: How Student Debt and the Racial Wealth Gap Reinforce Each Other

College on a Credit Card

Demos conducted a nationwide survey of low- and middle-income households in early 2012. The findings in this brief summarize the relationship between college costs and credit card debt, and its impact on students and their parents.
Research
Catherine Ruetschlin
Robert Hiltonsmith