Today, Senator Elizabeth Warren unveiled an ambitious plan to make college tuition-free, expand Pell Grants for low-income students, and cancel student loan debt for most borrowers. It is the first plan of the 2020 election cycle that comprehensively addresses both college affordability and student loan debt simultaneously. It also marks the first time that mass student debt cancellation has been proposed as a serious, presidential campaign-level topic.

The contours of Senator Warren’s plan are as follows: A guarantee of tuition-free public college, at two- or four-year schools for everyone, with a massive expansion of Pell Grants to help low-income and middle-class students pay for living costs and other expenses that make up the majority of borrowing. Thus, it is effectively a guarantee of tuition-free college for everyone and a guarantee of debt-free college for low-income students. The plan would also cancel up to $50,000 in student loan debt for families making under $100,000 annually, with a sliding scale of forgiveness for those making between $100,000 - $250,000.

This upends a debate that has circulated in progressive circles over the past several years, between those who favor a universal flat benefit of tuition-free college, and those who prefer a guarantee of debt-free college for everyone by covering unmet financial need for low- and middle-income students.

This plan does both. By expanding eligibility for Pell Grants, and potentially increasing awards to the level that they cover most non-tuition costs, it offers a pathway to college without any debt for those who are currently most likely to borrow and struggle to repay their loans. It links the simplicity of tuition-free college with the progressivity (and concern about non-tuition costs) that debt-free college advocates endorse. It expands funding for Historically Black Colleges and Universities who, due to centuries of structural racism, do not have the same resources as predominately white institutions.

And indeed, the dramatic rise in student loan debt has placed unacceptable risk on working class families and on people of color, who must take on more debt for the same degree as white students and often need to gain several levels of education just to maintain a foothold in the middle class. 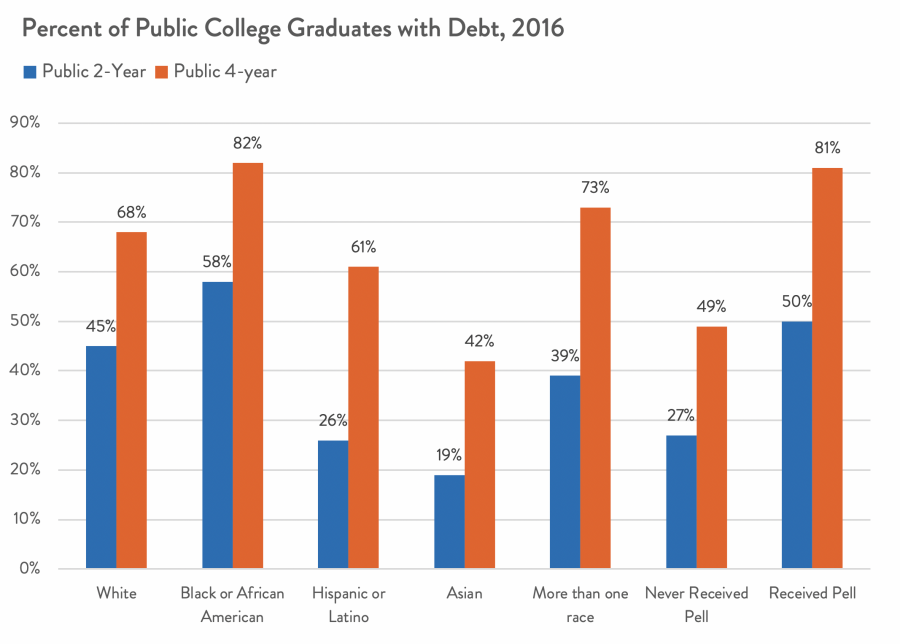 Despite the federal government trying to make student debt payments more manageable (by creating repayment plans that align borrowers’ monthly payments with their income), the percentage of student loans that are 90 or more days delinquent has remained essentially unchanged since 2012, even as unemployment has fallen and the economy has generally improved. Default rates are appallingly high on student debt, particularly among black borrowers. And borrowers of color find it basically impossible to chip away at both the principal and interest on their debt. 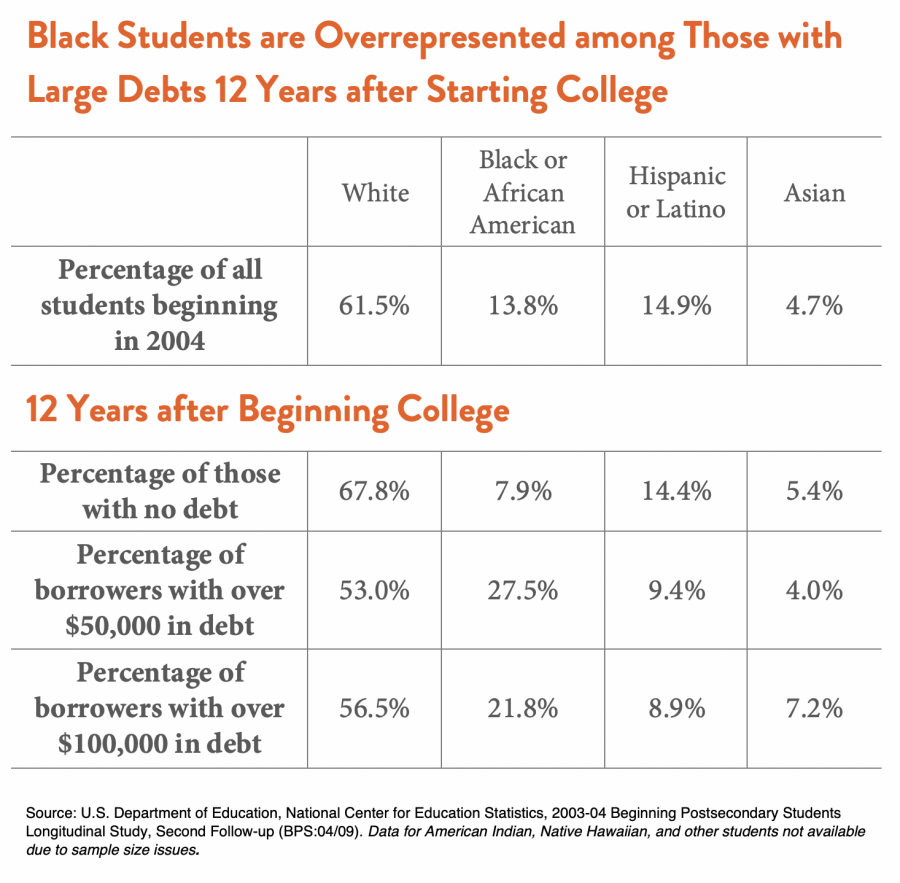 Rather than fixing loan repayment, actually cancelling a portion of everyone’s debt – Warren proposes forgiving $50,000 of debt for families making under $100,000 a year, with a sliding scale of forgiveness for wealthier families – could substantially address the racial disparities inherent in student loan borrowing. Black borrowers are overrepresented among those who have large debt. 12 years after beginning college, black borrowers make up under 8% of those with no debt, but over a quarter (27.5%) of those who hold over $50,000.

There are large populations who have attempted college for whom it did not pay off. Among families receiving means-tested assistance (including SNAP, housing assistance, TANF, Medicaid, or SSI), 11.6% had a bachelor’s degree or higher, and additional 31.8% had at least some college.

This shift in the policy conversation is striking. For many years, the policy consensus around addressing student loan debt centered on making the debt easier to repay, targeting forgiveness at those who had been harmed by bad actors, preventing those bad actors from accessing federal loan dollars, and holding loan servicers accountable. All of these were and are noble goals, but all of them were predicated on the notion that student debt problem is a consumer protection problem, that student debt was fundamentally “good debt,” and that as long as higher education resulted in greater earnings than high school, debt was justified for most. We also continue to justify student debt on the assumption that America suffers only from a college completion crisis, despite the fact that over 20% of Black bachelor’s degree recipients default on their loans.

The new conversation, which Senator Warren’s policy has helped jumpstart, is based on a deeper question about whether it is either moral or efficient to force people into borrowing massive amounts of money for an education – particularly an undergraduate education, and more particularly an undergraduate education at a public 2- or 4-year college. It also asks: What do we do when one of our social safety net programs (in this case, federal student loans) turns out to cause disproportionate and extensive harm to certain communities? Should we continue to make the program simpler and fairer, or should we essentially start from scratch?

There are important details to work out. Ensuring states continue to reinvest in public higher education is crucial, as is finding the right level of investment that states can maintain given competing priorities. It’s also important to create a tuition-free, or debt-free, policy that survives a recession when state budgets are squeezed and demand for education rises. We should ensure that Pell Grants meaningfully address the rising cost of non-college expenses, from housing to childcare. We should also work to address inequity within public higher education, not only by reducing the financial burden of attending, but by making sure selective public colleges are available to all students and not just a wealthy, white few. And since this plan would not eliminate all debt – there are still some middle-income families, for example, who have over $50,000 in debt – we should think about how to address repayment and other mechanisms for the borrowers who remain. Finally, we should think about how our safety net addresses those who have recently paid off student debt but still may be struggling financially.

But it is refreshing to see student debt cancellation being taken seriously, and that policies to address future student populations are also taking a look at the consequence of policies that treat higher education solely as a private good. It’s also important to recognize that many people struggling with student loan debt did nothing but follow their dreams and educational aspirations, and that many of them should just be given a chance to move on with their lives.