The Failure of the 401(k): How Individual Retirement Plans are a Costly Gamble for American Workers

If the twin threats to public pensions continue, African American retirees may lose much of the retirement security they’ve gained over the past half-century.

Public sector jobs, with the pensions they provide, have been one of the most important ways for black families to enter the middle class since the 1960s, when civil rights legislation and the expansion of the federal government opened the door for African American workers to enter public service. In particular, the establishment of the Equal Employment Opportunity Commission as part of the Civil Rights Act of 1964, which was responsible for enforcing workforce anti-discrimination provisions in the Act, and President Johnson’s 1965 Executive Order 11246, which prohibited government contractors from discriminating on the basis of race and other categories, created opportunities for black workers to enter civil service en masse.1 Between 1961 and 1965, black workers were hired for 28 percent of new positions in the federal government despite comprising just 10 percent of the U.S. population.2   The importance of public sector employment for African American workers has continued to the present day, with 21.2 percent of all black women and 15.4 percent of all black men working in the public sector, compared to 17.5 percent and 11.8 percent of white women and men, respectively.3

Over the past twenty years, many of the African American workers who entered public service during the boom in black public employment in the middle of the last century have begun to retire. As Figure 1 shows, over the past two decades the share of black retirees6 with public pensions has increased sharply as well, from 9.8 percent to 11.4 percent, mirroring the rise in the overall share of retirees with pensions. The median pension7 has also risen, increasing more than 11 percent since 1994. Looking by gender, smaller shares of retired women of all races have public pensions than do men; women’s pensions are smaller than men’s as well, though both gaps have narrowed in the past two decades. The share of retired black women in 2014 with public pensions, 11.7 percent, has caught up to the share of black male retirees with public pensions, 11.0 percent, up from 8.9 percent and 11 percent, respectively, in 1994. 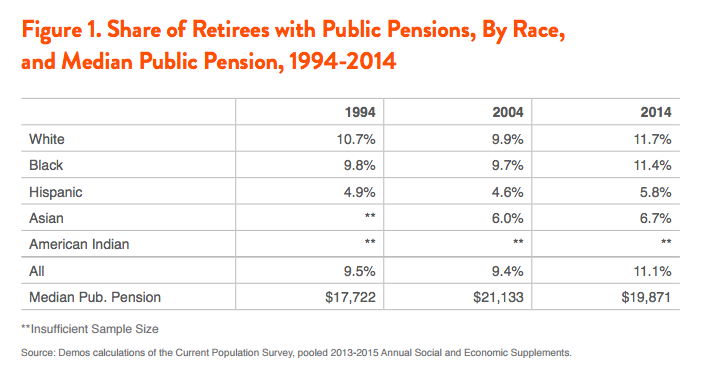 Public pension income is particularly important to African American retirees, providing a larger share of income for them than for retirees of other races and ethnicities. Figure 2 depicts the shares of retirement income that retirees receive from five major income categories: Social Security, wages, public pensions, other pensions (including defined contribution plans and private defined benefit plans), and other income (including income from interest, dividends, businesses, farms, and rent). It shows that in 2014, public pensions and Social Security together accounted for 57 percent of black retirees’ income compared to 49 percent for white retirees. By gender, Social Security accounted for a far larger share of the retirement income of women of all races in 2014 than it did for men; conversely, other pension income made up a smaller share of women’s retirement income than it did men’s. Social Security and public pension income is particularly important for black women: together, the two income sources accounted for 63 percent of the total retirement income of black women, the highest share of any race and gender; black men, in comparison, received 51 percent of their income from the two sources combined.8 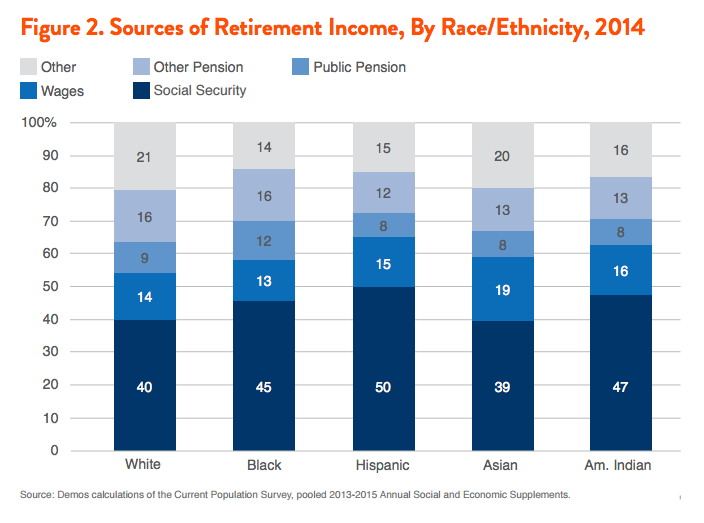 Figure 2 also illustrates another important trend: the increasing share of retirement income provided by wages for all retirees. Between 1994 and 2014, the overall share of retirement income from wages increased from 3 percent to 15 percent, due to the increasing number of older Americans who continue to work after taking Social Security. Although many of them are in the upper half of the income distribution, many Americans in the bottom half of the income distribution are working past age 65 as well. Various factors drive this trend of older and post-retirement work, but the biggest contributors are the increase in the Social Security Full Retirement Age from 65 to 67, the decline in labor force participation of younger Americans (largely because of increased pursuit of higher education), delayed family formation by younger Americans, and the decline of private pensions—each of which has either forced or incentivized older Americans to work longer.9 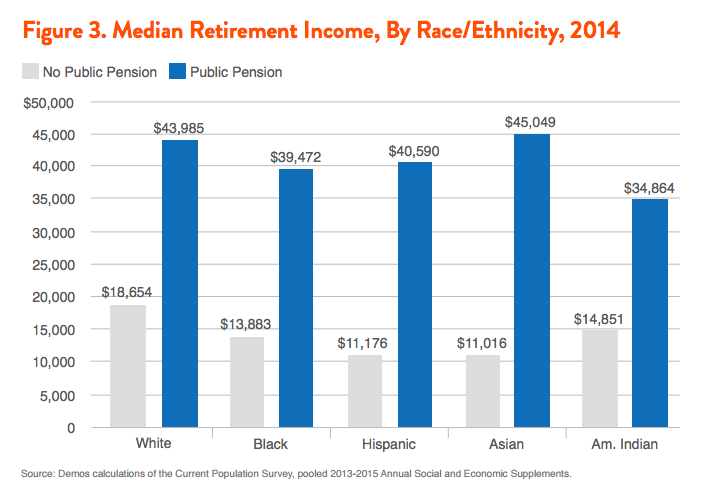 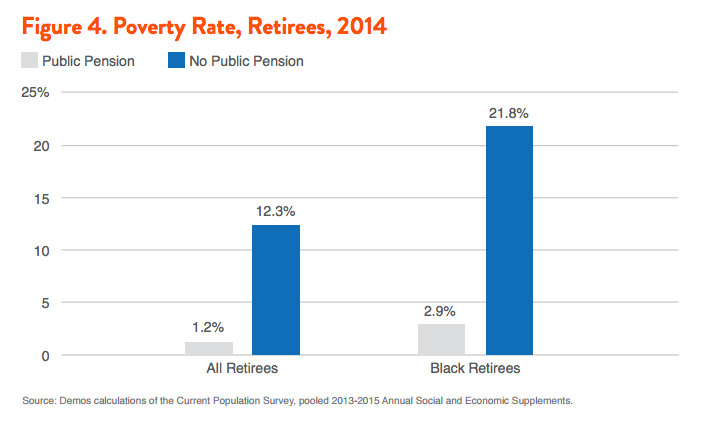 How Cuts to Public Employment and Pensions Hurt Black Retirees

Given the crucial role of public pensions in African American retirement security, the decline of both public sector employment and the pensions these jobs offer has already hurt the retirement prospects of current black workers; if this decline continues, the impact on black retirement security may be catastrophic. The reduction in public employment has meant fewer stable middle-class jobs for black workers, who have relied on public employment as a pathway to the middle class for more than half a century. The cuts to public pensions mean that even for those black workers fortunate enough to get one of the shrinking pool of public sector jobs, they’re forced to shoulder an increasingly large share of the retirement security burden. And given the poverty rates cited above for black retirees without public pensions, we can predict that the impact of these cuts will be grim indeed.

Figure 5 shows total federal, state, and local government employment between 1994 and 2014. Although total public employment has risen slightly—by about 9 percent—over the past two decades, the total U.S. labor force grew much faster over the same period, rising by 21 percent. This means that the share of all workers employed by the government has fallen since 1994, reducing government’s capacity to serve our ever-growing population. If the share of workers in public employment had merely held constant over the past 20 years, there would be nearly 2.3 million more public jobs today; this is the “missing” public employment that Figure 5 depicts. Given that 14.3 percent of public workers in 2014 were black, this translates to almost 320,000 lost public jobs for black workers in the past two decades, a huge blow for the black middle class and their retirement security. Figure 6 breaks down the missing public employment by race/ethnicity based on current composition of the public employee workforce. 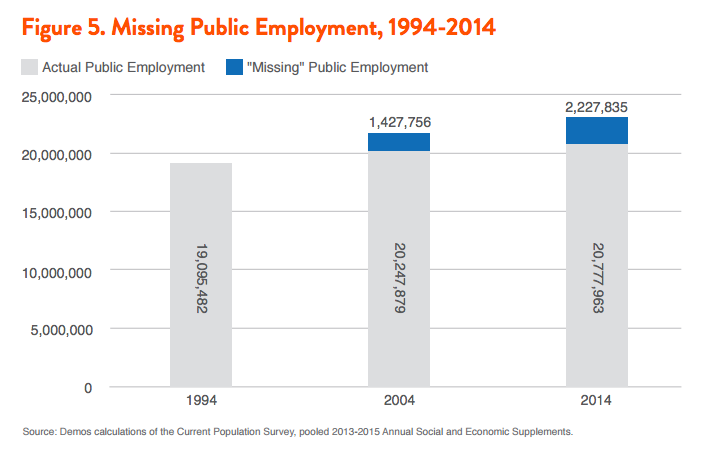 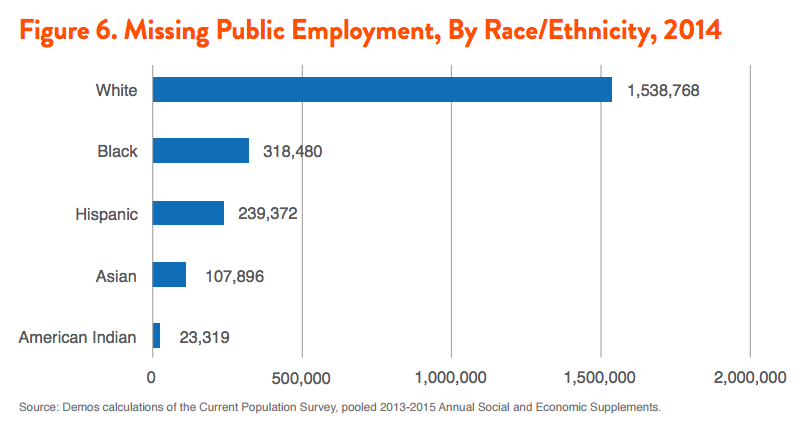 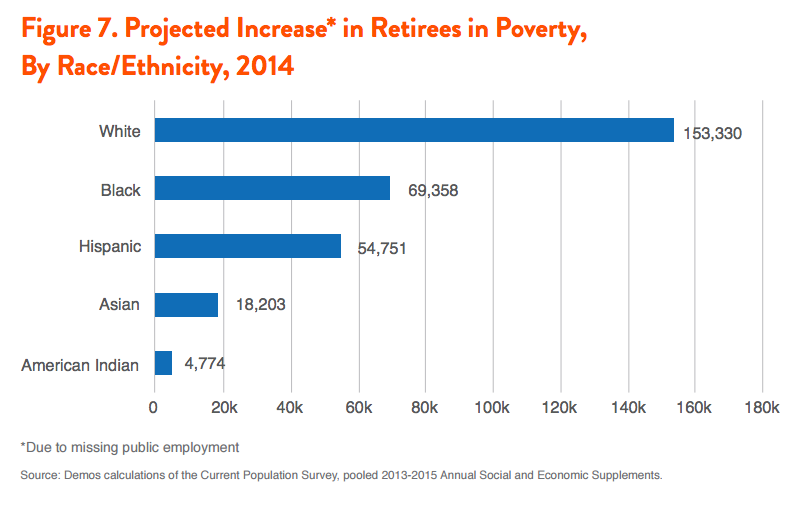 The impact of the recent cuts to public pensions is harder to quantify, because we won’t know how the cuts have affected workers’ retirement security until the workers affected by the cuts retire. The majority of African American retirees in 2014 who worked in the public sector began their careers between the 1960s and 1980s, before the recent waves of pension cuts were enacted. However, by examining the breadth and magnitude of recent cuts, we can form a reasonable prediction of their effects on the retirement security of future retirees.

Unfortunately, in the past five years, state pension cuts have been widespread. Figure 8 maps state pension cuts since 2009. Thirty-four states have either cut benefits for new workers, raised their retirement age (which is effectively a benefit cut) or increased workers’ required pension contributions (which, though not a benefit cut, is in essence a salary cut), or enacted multiple reductions, as has happened in the majority of states that have made pension cuts.12 And these cuts have been far from minor: in the 24 states that made direct cuts to pension benefits—i.e. changed the formula by which benefits are calculated—such cuts averaged 7.5 percent of a future retiree’s projected annual benefit.13 Nine states cut benefits by 10 percent or more, and four—Alabama, Maryland, New Mexico, and Pennsylvania—cut benefits by at least 19 percent. These cuts mean that public workers in these 24 states will have to save an average of an additional $50,022 each in individual retirement savings to replace the retirement income lost through the cuts enacted in just the past 5 years. 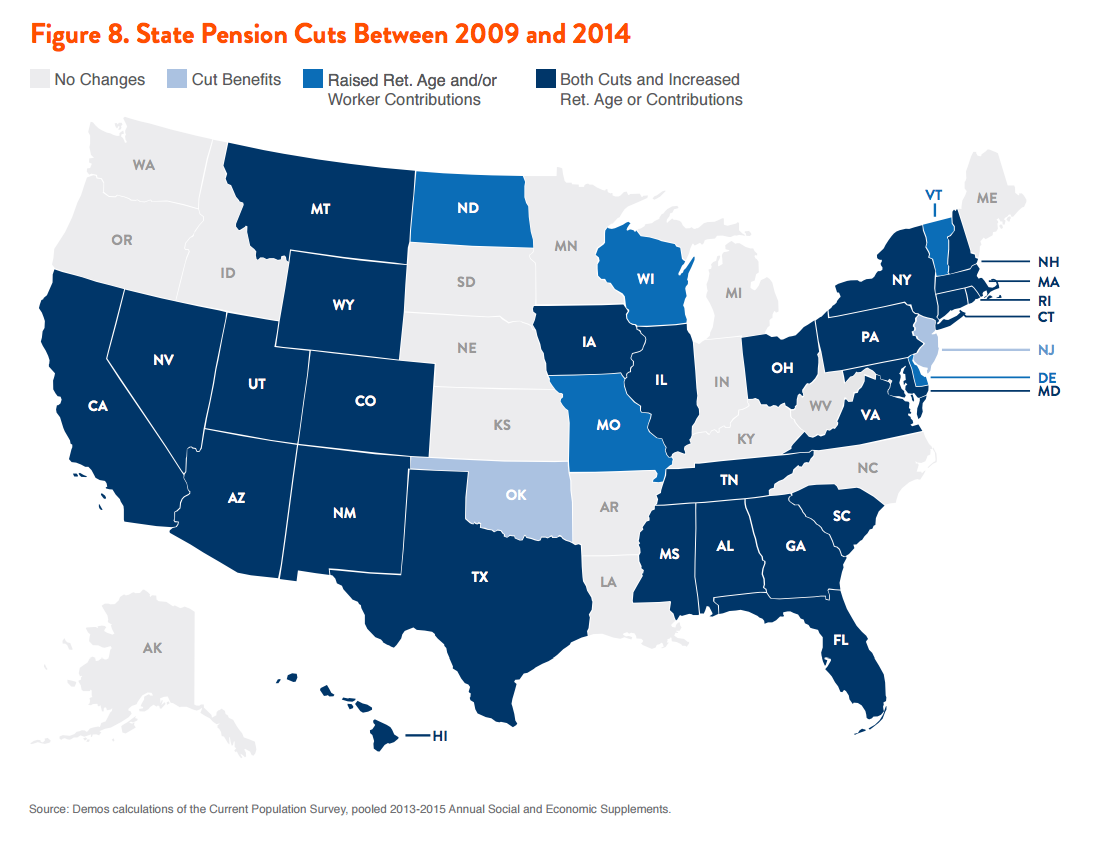 The twin threats of declining public sector employment and cuts to public pensions pose a grave threat to the retirement security of current and future African American workers. The overall poverty rate of black retirees in 2014 was 19.7 percent, 75 percent higher than the overall retiree poverty rate of 11.3 percent. If public jobs continue to disappear and public pensions continue to be cut, future black public workers will be forced to rely on defined contribution plans—401(k)s, IRAs, etc.—to supplement Social Security to provide adequate retirement income. But the documented failure of 401(k)-type plans14 to provide retirement security for private sector workers make this a dangerous path indeed.15 The high fees and multitude of risks that 401(k)s force savers to shoulder make these plans entirely unsuitable to be workers’ primary supplement to Social Security for retirement income. Clear evidence of the insufficiency of 401(k)-type plans is apparent in the incomes of retirees without public pensions, illustrated in Figure 3 above. As the figure showed, the median income of retirees without public pensions in 2014 was just $17,184, meaning that more than half of private-sector retirees receive nearly all of their income from Social Security, leaving them far from the dignified retirement once promised to most hard-working Americans.

For a more in-depth explanation of the risks of 401(k)s and the impact of fees on retirement savings, see two prior Demos papers: The Failure of the 401(k) and The Retirement Savings Drain.

What Needs to Be Done

By protecting existing public pensions, creating new retirement savings accounts for private sector workers that provide many of the benefits of defined benefit plans, and protecting and strengthening Social Security, we can ensure that workers today and in the future—particularly workers of color—have the chance to retire with dignity, a key part of the American dream.