As the fog clears from the 2020 election, and as control of the Senate hinges on two run-off elections in Georgia, many progressives are focused on what a Biden-Harris administration can do to help shore up the economy, with or without input from Congress. In an ideal world, a new administration would be able to rely on a Senate that, regardless of which party controls the majority, recognizes the need to empower and provide relief for Black and Latinx workers and women, and renews and builds upon the most successful efforts of the CARES Act that put money in workers’ pockets and temporarily staved off financial catastrophe for so many.

Recent evidence suggests we do not live in that world.

So it is incredibly important, while we await the January 5th election in the Peach State, to outline the ways in which the new administration can begin to undo the damage and help as many Americans as possible, while focusing specifically on preventing the bottom from falling out for the most vulnerable families in this economy.

[C]anceling student debt may be the most effective effort at delivering relief to millions of Americans[.]

Many advocates are coalescing around a solution to do just that: broad-based cancellation of student loan debt, which existing authority likely gives the president the ability to do. Indeed, of the economic tools available to the president via executive action, canceling student debt may be the most effective effort at delivering relief to millions of Americans while specifically helping Black families regain and build wealth.

The number of Americans with student loan debt has skyrocketed over the past 2 decades, and now sits at 45 million. It has more than doubled since 2004. This is tragic for many reasons, including our inability to address runaway college prices or invest public resources in ways that would make college affordable for poor and working-class students. And while student debt is most closely related to the college affordability crisis, it has become more acute at a time when millions of Americans are facing a housing and rent squeeze, rising healthcare costs, and childcare costs that in many cases outpace the price of higher education.

A reasonable, fair economic policy platform would guarantee that all of these basic needs would be affordable and that no debts would be burdensome, and that when families face an economic crisis for which they could not possibly have planned, Congress would work to make them whole. Yet for as long as the Senate GOP remains insistent that the economy is not doing that poorly, despite 21 million Americans currently accessing unemployment benefits and small business revenue down by over a quarter since the beginning of the year, the focus should be on workarounds that help as many households as possible.

An argument often deployed against student debt relief is that the government should prioritize other areas of economic pain—say, credit card debt or rent relief – or target relief at non-college goers. This is a red herring—there is virtually no one arguing that student loan relief alone will make families whole, or that the government should not prioritize the very real precarity faced by those with or without student debt.

Canceling student debt is an efficient, simple, way to get relief out the door.

But relative to other (very good) executive action ideas—like negotiating drug prices, raising wages for federal contractors, and tackling monopolies and corporate power—the potential number of people impacted, and the amount of immediate relief available, is simply much higher. Canceling student debt is an efficient, simple, way to get relief out the door.

The second common argument against canceling student debt goes like this: College graduates tend to have more wealth and higher income than non-college goers, who almost by definition do not have to deal with student loans. This argument has some truth on the surface; after all, one of the many benefits of education is to gain the social networks, signals, and skills to maintain a middle-class (or better) life. But this story is, at its core, a race-blind look at how education and wealth intersect for non-white people.

[L]ooking across race reveals a complicated story that starts to get at why student debt is such a disaster for some families.

For an individual household, greater levels of education tend to mean greater wealth; and greater wealth tends to mean greater levels of education. But as many of us have been arguing for years, looking across race reveals a complicated story that starts to get at why student debt is such a disaster for some families. According to new data from the 2019 Survey of Consumer Finances, we know that Black college-educated households have far less wealth, at the median, than white households with a high school degree or less. Black households with an associate degree have less than half the wealth of white households with a high school degree or less. 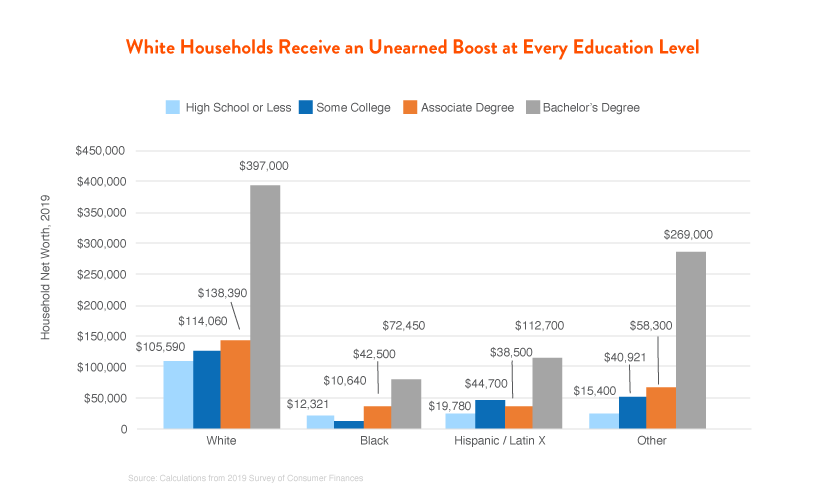 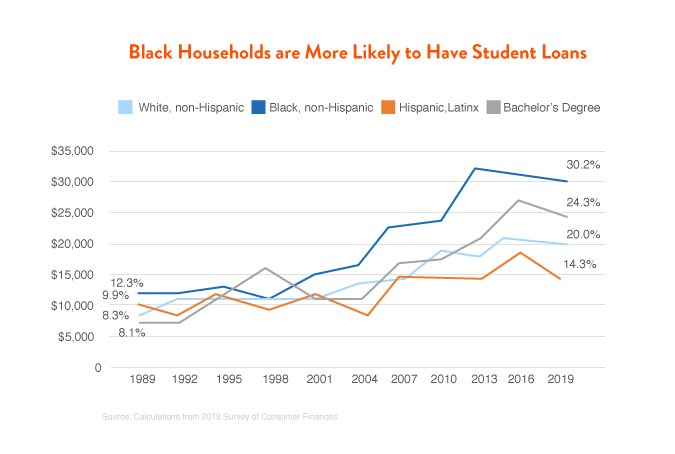 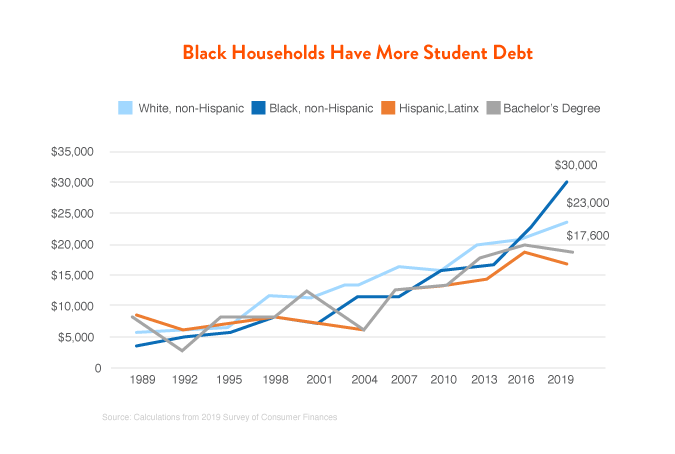 Even among households with a bachelor’s degree who qualify as “middle-income,” Black households are still far likelier to have student debt on their balance sheets.

In a way, this shows how outdated the perception of student debt is. The assumption that student loan holders are relatively privileged members of society runs aground when the data shows that those who receive the greatest boost (in terms of wealth) from going to college are also those least likely to have student loan debt. Even among households with a bachelor’s degree who qualify as “middle-income,” Black households are still far likelier to have student debt on their balance sheets. 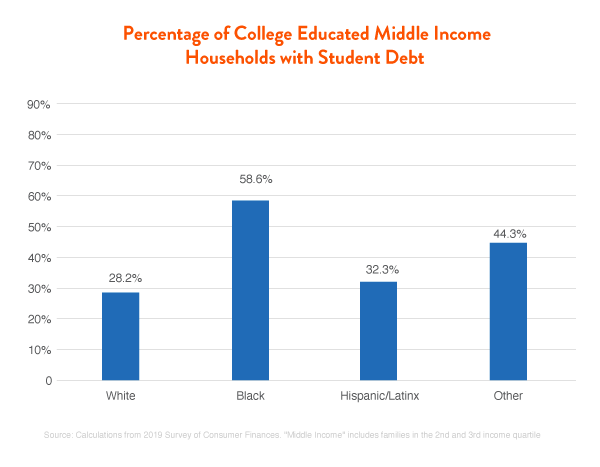 Student Debt is Sticky for Black Borrowers. Cancellation Changes That.

In fact, 12 years after beginning school, nearly two-thirds of Black borrowers owe more than they originally borrowed, compared to fewer than one-third of white borrowers.

Taking away some or all student loan debt would also rectify the tragic fact that Black borrowers are, by and large, unable to make a dent in their balances once they do take on loans. In fact, 12 years after beginning school, nearly two-thirds of Black borrowers owe more than they originally borrowed, compared to fewer than one-third of white borrowers. For Black families, student debt persists for decades. Beyond any potential immediate stimulus created by offloading monthly payments, imagine the long-term possibility created by freeing up the hundreds of monthly payments that have amounted to little or no principal being reduced. 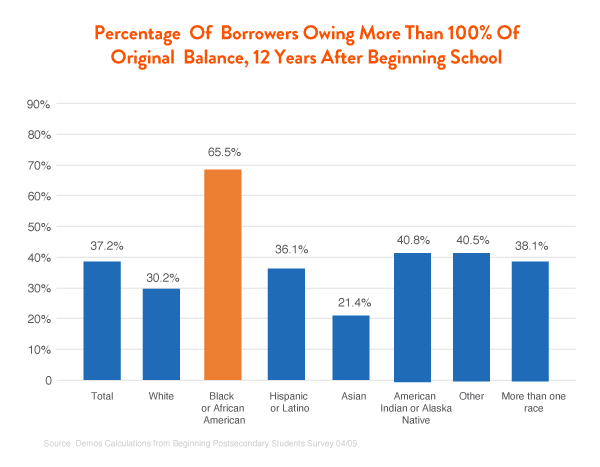 It also should be noted that these figures are all from prior to the pandemic, which has resulted in sustained double-digit unemployment rates for Black workers, as well as greater housing and food insecurity for Black and brown families. Over half of Black and Latinx families report a loss of income since March, and fully ¼ of Black renters are currently behind on payments.

But those with some college, or even a bachelor’s degree, have also experienced economic pain at comparable rates. Many of these households have student debt, and are worse off than they were at the beginning of the year. 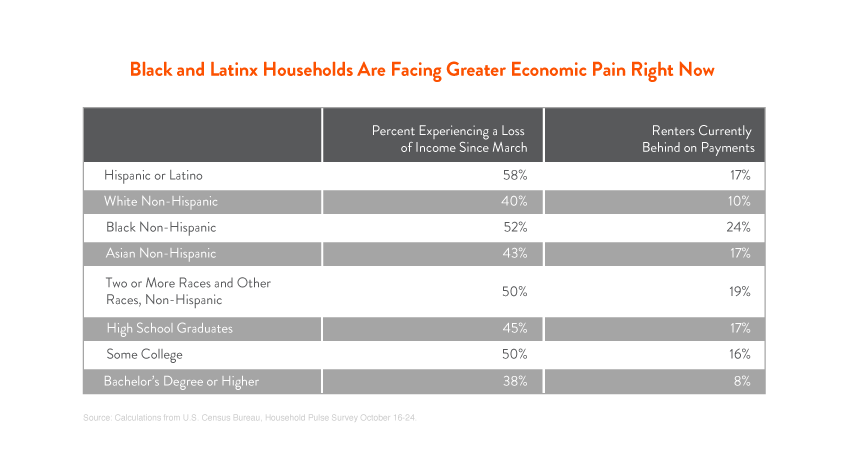 Since March, student loan borrowers have been able to freeze their payments—a policy which will end on December 31st of this year unless President Trump, or Congress, acts to extend it before the end of the calendar year. This payment pause has been a necessary step to prevent potentially millions of loan defaults, but if and when borrowers must begin repaying, they will be doing so in an economy that is far weaker and with greater financial insecurity than before, with the same loan balance staring them in the face.

There is also a fundamental psychological difference between freezing monthly payments and offloading debt. Those who know that student debt is still waiting to be repaid are likely making very different financial decisions than those who know it will no longer be a burden. Research suggests that cancelling student debt can change career trajectories, help pay off other debts, and enhance small businesses – a particular selling point given the impact of the pandemic on small businesses across the country.

Forgiveness Needs to be Followed by Long-Term Investment

Even at the lower end of this range, upwards of half of those with federal student loans would see half or more of their debt wiped away.

Senate and House Democrats, and President-elect Biden, have all offered policies that would result in a range of debt cancellation—between $10,000 and $50,000 per borrower. Even at the lower end of this range, upwards of half of those with federal student loans would see half or more of their debt wiped away. This is transformative, but of course will only lead to a meaningful shift in Black and brown wealth if it is coupled with large-scale investments to prevent future generations from borrowing or being overwhelmed by debt. It will require a new federal-state partnership and reforms to the federal loan program going forward. It will require tackling the childcare crisis, raising wages, investing in affordable housing, and any number of things that Congress, states, and the executive branch can do in a governing moment.

And yet, that should not stop us from using all the tools in the toolbox to help families—especially Black and brown families—now. Student debt cancellation should be one such tool.

Due to disinvestment, a lack of grant aid, and the rising cost of living, Arizona’s students face a steep hill in paying for college.
Policy Briefs
Mark Huelsman

Roundup: The Wisconsin Voter Purge, Debt-Free College, and other must-reads

Fresh research and writing for the start of 2020.
Blog
Gwyn Ellsworth