The Role of Voter Suppression in the 2016 Election

What happened in 2016? In a recent Monkey Cage piece, I discussed the research Demos is performing with political scientists Bernard Fraga, Brian Schaffner and Jesse Rhodes on how depressed turnout contributed to Trump’s electoral college victory. However, the piece doesn’t discuss what caused that decline in turnout and what it means for the future of the Democratic Party. The work that Demos and other researchers are doing increasingly suggests that voter suppression and demobilization played key roles in the 2016 election and have structurally hampered a progressive agenda. To win, progressives need an energizing agenda to mobilize their base, an effective strategy to end voter suppression, and aggressive voter registration reforms to tap into the rising American Electorate. The data suggest that Democrats should not “blame” black voters for their defeat, but rather see black voters as the core of a winning progressive coalition.

The 2016 election was the first to take place without the full protections of the Voting Rights Act. The results were manifold, from racially discriminatory voter ID laws, which could have swung states to Trump, to racially-motivated polling place closures, which are shown to depress turnout. A report found that in jurisdictions previously covered by Section 5 of the Voting Rights Act, 868 polling places were shuttered. Previous research shows that the black share of a county’s population predicts fewer early voting sites. In North Carolina, federal judges found that Republicans worked to suppress black voters with “surgical precision.” After losing a close Senate election, New Hampshire Republicans are pushing forward with a residency bill designed to suppress young voters.

Suppression is deeply embedded in American elections, from registration barriers to felon disenfranchisement. In states like Texas, Republicans have erected huge barriers to registration drives, such as requiring individuals who want to register folks to be deputized. These barriers work: according to Census Bureau data, only 68 percent of eligible individuals are registered to vote. Registration barriers are so deep that according to Census data, even if every registered voter in Texas voted, the turnout rate (68 percent) would be lower than the current turnout rate in Minnesota (69 percent).

In addition, Democrats have done a poor job making a case to black voters, particularly young black voters. Part of this was the legacy of Democratic policies on mass incarceration and mass deportation. For far too long, Democrats tried to use racist appeals to win over white voters. That history was conflated with Clinton’s candidacy and aggressively pushed by Trump’s campaign, which ran ads intended to “suppress” young black voters.

The data below come from Democratic pollster and consultant Geoff Garin, based on Hart Research Associates polling from before the 2012 and 2016 elections. The data show that black voters and young voters did not perceive Clinton’s economic agenda as being “good for people like me.” Though Democrats have spoken about the need to mobilize their base with policies, it’s clear that in this case the base was not energized.

It’s clear that the media played some role in the lack of policy discussion; they focused on controversies and personalities, and did little substantive coverage. However, in her paid advertisements Clinton shied away from jobs and the economy. Prof. Lynn Vavreck finds that, “More than three-quarters of the appeals in Mrs. Clinton’s advertisements (and nearly half of Mr. Trump’s) were about traits, characteristics or dispositions. Only 9 percent of Mrs. Clinton’s appeals in her ads were about jobs or the economy. By contrast, 34 percent of Mr. Trump’s appeals focused on the economy, jobs, taxes and trade.” Vavreck finds that in the past, personal traits accounted for 22 percent of ads, and the economy 28 percent. In this sense, Clinton’s ad strategy was quite out of the ordinary. The chart below, by the Wesleyan Media Project, shows this point graphically. The problem with this strategy is that voters are overwhelmingly more concerned about the economy and jobs than personality. According to a Huffington Post/YouGov poll, forty-three percent of Americans chose the economy as 1 of the 2 most important issues to them; only 8 percent chose the candidate’s personal qualities. However, only 18 percent said the economy was 1 of the 2 issues they had heard the most about from Clinton’s campaign, though 32 percent said the same about personal qualities. A policy-centered campaign could help mobilize voters who overwhelmingly side with progressives on the issues. 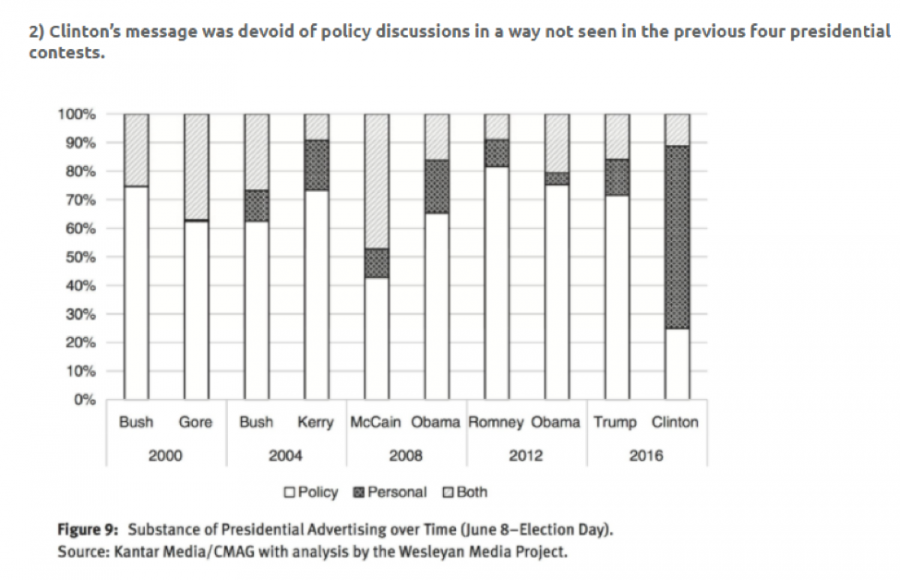 These data suggest that Democrats must make aggressive efforts to fight voter suppression, pave the way for voter access, aggressively push for a progressive agenda and put renewed energy in diversifying staff, candidates and consultancies. Democrats and progressives should be focusing on expanding participation of the growing population of core Democratic voters—especially people of color, young people, and single women. To do this, they must aggressively fight for easier access to the polls at the state level. A model is Georgia, where Rep. Stacey Abrams founded an initiative to register the 900,000 unregistered people of color in the state. In Oregon, automatic voter registration has increased the registration and turnout rate, particularly among people of color.  Democrats should not sell their core voters short in a chase for white voters, as some have suggested. But rather they must embrace a progressive policy agenda that mobilizes a multi-racial working class and populist electorate, including Medicare-for-All, debt-free college, a path to citizenship, decarceration, and climate equity. These policies should be the centerpiece of their strategy in the 2017 and 2018 elections.