The Real Cause of Rising Tuition at Public Colleges? State Funding Cuts.

The twin issues of rising tuition and increasing student debt have become major national concerns in the past few years, as students, policymakers, and the media have all recognized the threat that the increasing unaffordability of a college education poses to our country’s future economic growth. But there has been less alarm over the causes of rising tuition in these circles, and when there is, such coverage unfortunately often focuses on minor contributors to rising costs, such as increased administrative costs and spending on dorms and other amenities. Yet the major cause of rising tuition at public colleges—cuts to state higher education funding, as we and others have shown—is all-too-often ignored, likely because the solution it implies—reversing these funding cuts—has become sadly taboo in our austerity-dominated political landscape.

Doug Webber’s recent piece at FiveThirtyEight helps correct that omission. Using Department of Education data, he shows that state funding cuts account for about three-quarters of the rise in tuition at public universities over the past 15 years, while all other factors, including rising administrative spending and construction costs, are responsible for at most a quarter of the rise.  His numbers nearly exactly match the conclusions of our own study on the causes of rising tuition, “Pulling Up the Higher Ed Ladder.” In it, we used a different data source and examined the decade between 2001 and 2011, but reached a nearly identical figure for the share of rising public university tuition caused by state funding cuts: 79 percent at public research universities and 78 percent at all other 4-year public universities, as shown in the figure below. According to our research, higher instruction costs accounted for between 9 and 11 percent of the increase, while increased administrative and construction spending each accounted for between 5 and 6 percent. 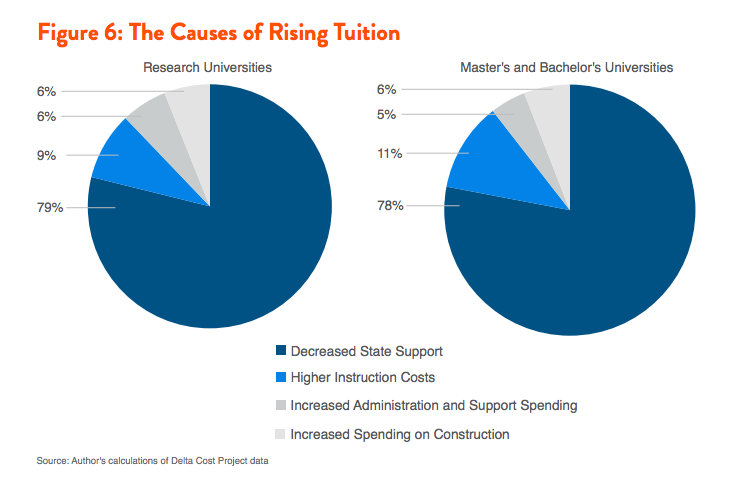 These numbers make clear that to halt and even reverse the trend of ever-rising tuition without compromising the quality of higher education, we must reinvest in higher education. Moreover, as two decades of funding cuts have made clear, states are either unable or unwilling to fund this reinvestment on their own. Thus, it makes sense that the federal government takes the lead in making college once again affordable. After all, rising student debt caused by tuition hikes is a drag on the national economy, inhibiting college grads’ ability to buy houses and save for retirement. This is why Demos’ proposal, the “Affordable College Compact” crafted by my colleague Mark Huelsman, creates a federal-state compact to ensure debt-free college, in which the federal government provides matching grants to states that ensure the majority of their poor-, working- and middle-class students can attend college without incurring debt or financial hardship. The Compact represents a fair, achievable path to return to debt-free college. The need for a return to debt-free college has even become an issue in the presidential campaign, as Hillary Clinton, the Democratic candidate, has detailed her plan for achieving college affordability.

Note that I say “return to debt-free college” because the Compact is really just a means to return public higher education to what it used to be in this country: affordable to any student with the drive and desire to earn a degree. So, the next time you read an article talking about out-of-control tuition or crushing student debt, remember the real solution: returning the “public” to public higher education.