Brenda Wright
Laura Williamson
Pamela Cataldo
How and why the National Voter Registration Act of 1993 has played such a critical role in increasing access to voter registration.
Image
Democratic Reform
Voting Rights & Access

The NVRA aims to reduce barriers to voter registration, which too often prevent eligible people from participating in the democratic process.

Twenty-six years ago today, President Clinton signed into law the National Voter Registration Act (NVRA) of 1993, the second piece of legislation he signed after winning the presidency in 1992. The NVRA aims to reduce barriers to voter registration, which too often prevent eligible people from participating in the democratic process. Its central provisions require states to provide convenient voter registration opportunities when people interact with government agencies, accept registration applications through the mail, and limit overly aggressive voter purges.

The NVRA is often referred to as the “Motor Voter Act,” because it requires that states provide voter registration during drivers’ license transactions. But it also plays a crucial role in providing voter registration opportunities during transactions at state public assistance and disability offices, to reach persons who are less likely to interact with motor vehicle offices.

We have been privileged to work on increasing the impact of the NVRA, from its infancy through today. Over the years, several states have gone to court seeking to resist implementation of the Act’s voter registration requirements. Having worked on the NVRA since its passage, Brenda (one of our co-authors) argued one of the early cases, from Mississippi, in the United States Supreme Court in 1996 (we’re glad to say that the good guys won). Demos and other partners have continued to monitor how states are doing in providing the voter registration services the NVRA requires, and we pursue advocacy and litigation in many states that have lagged in the numbers of voter registrations collected through public assistance agencies. Last year, we released a report marking the 25th anniversary of the NVRA and summarizing the impact of enforcement efforts. This work across nearly 2 dozen states has resulted in over 3 million new voter registration applications through public assistance agencies covered by the NVRA. And the numbers continue to grow every month.

Ohio, where Demos filed the first of its lawsuits in 2006, provides a particularly dramatic example of how improved implementation of the NVRA increases voter registration through public assistance agencies. Ohio’s agencies were collecting fewer than 1,600 applications per month before we intervened, compared to 13,000 per month since the intervention—a more than 700 percent increase that has resulted in over 800,000 additional voter registrations. 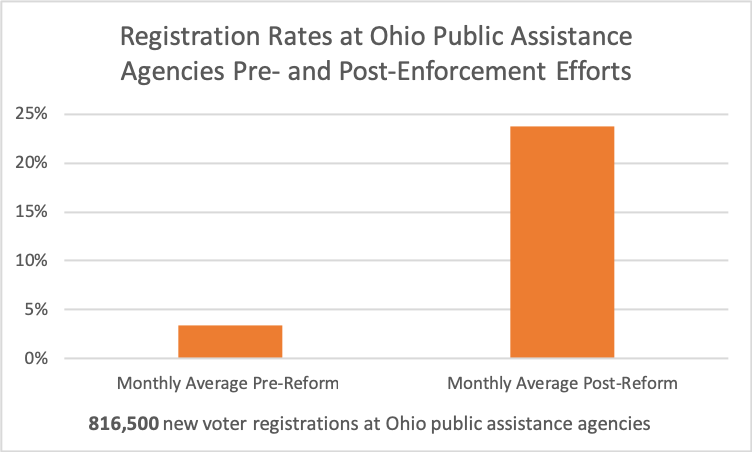 The NVRA’s requirements for voter registration services through drivers’ license agencies are also a powerful tool to increase registration, when properly implemented. These “Motor Voter” requirements have helped smooth the way for Automatic Voter Registration (AVR), the next logical step in lowering the barriers to full registration and voting. AVR makes voter registration automatic for eligible persons, unless the person affirmatively opts out of registering to vote. Oregon, the first state to enact AVR, had the greatest increase in voter turnout of any state in 2016.

During the past year, Demos, along with other partners, has pursued compliance efforts to improve agency-based registration in Arizona, California, Missouri, Nevada, North Carolina, and South Carolina, illustrating the importance of ongoing vigilance to ensure that we achieve the full promise of the NVRA.

Although the NVRA, signed on this day in 1993, may not be as well-known as the Voting Rights Act of 1965, its critical role in increasing access to voter registration deserves celebration. Happy birthday, NVRA!

Dēmos President: 'Our need for the Freedom to Vote Act is urgent.'

"The Freedom to Vote Act — the most significant voting rights bill in generations — would be a giant step toward our goal of creating a just, inclusive, multiracial democracy."
Press release
Taifa Smith Butler