Oregon was the first state to implement Automatic Voter Registration. It was a resounding success for Oregonians.

In January 2016, Oregon became the first state in the country to implement Automatic Voter Registration (AVR).1 AVR increases access to voting by using information already provided to governments in order to add eligible individuals onto the voter rolls. In contrast to current models of self- registration, AVR removes outdated, unnecessary and cumbersome barriers to voting, shifting the burden of voter registration away from individuals and onto government in the process.2 Under the Oregon AVR program, eligible but unregistered voters found through the state’s Department of Motor Vehicles (DMV) databases are notified by mail that they will be added to the voter rolls, unless they decline registration within 21 days by returning a postcard to the state’s election authorities. For purposes of primary voting, this notification postcard also allows individuals to choose a political party. If no response is given, these individuals become automatically registered as “nonaffiliated” voters, which makes them ineligible to vote in primaries (Oregon has a closed primary system). Automatic address updates and notifications also take place through this system. 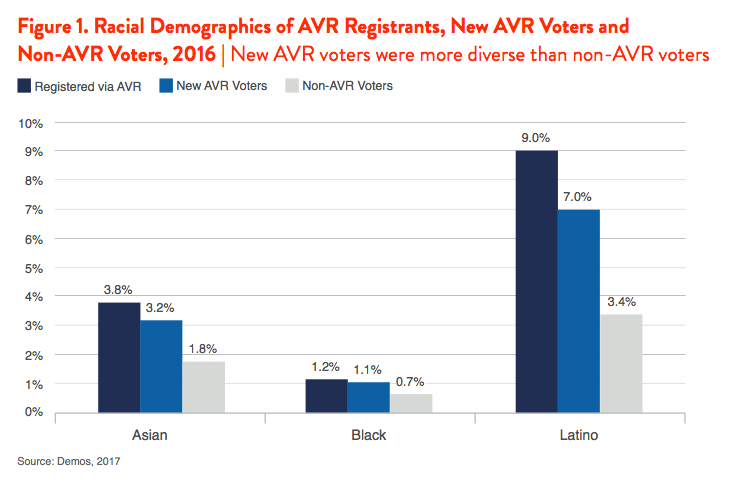 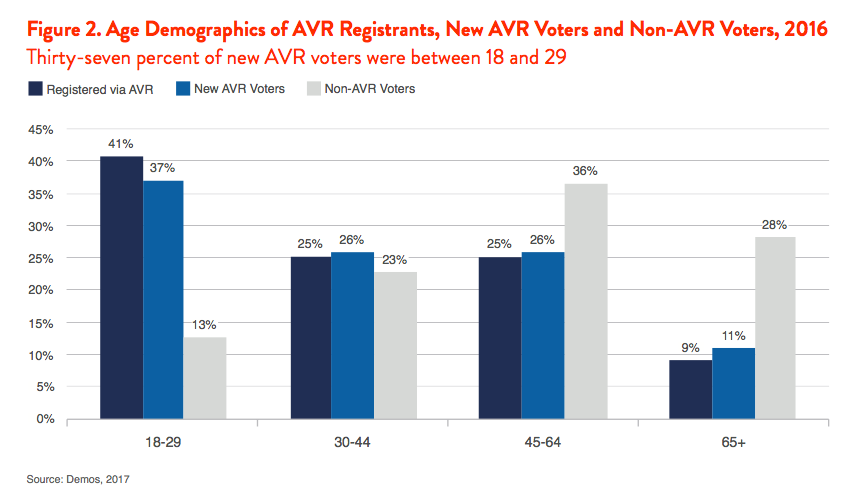 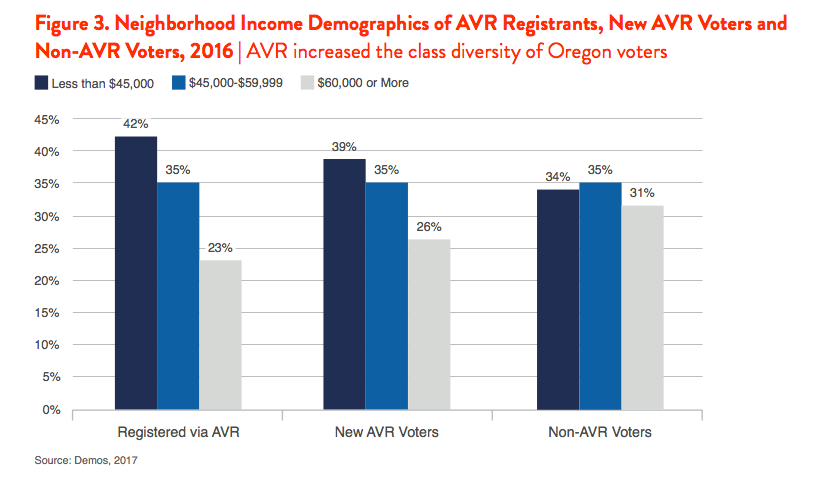 The state of Oregon maintains a list of the individuals who were automatically registered to vote in 2016. We merged these individuals with Catalist, a subscription database with demographic and validated registration and voting history data on more than 260 million American adults. By merging individuals from the Oregon database with Catalist using their voter ID number11 , we were able to obtain demographic and voting history data for a very large proportion of individuals who were automatically registered (98 percent of the data merged successfully between the Catalist and Oregon voter file data).12 Some demographic information, such as age, is available on the voter file. Oregon does not include race or ethnicity in its voter files, however. In such cases, Catalist uses a combination of information based on names and local racial/ethnic context to predict an individual’s race or ethnicity. Although the models are not perfect and should be treated with appropriate caution, they have been shown to be quite accurate in large-scale validation using public voter files.13

Using the information available, we were able to compare the demographic profiles and voting histories of individuals who were registered through AVR (either for the first time, or because a previous registration had lapsed) to those of Oregon residents with up-to-date registrations prior to implementation of the AVR law. Furthermore, because Catalist stores registration and voting history data from previous election cycles, we could compare registrants under AVR with those who registered to vote in 2012.

Our source of data for the Voting Eligible Population (VEP), which accounts for non-citizens and other people not eligible to vote, comes from Michael McDonald’s United States Election Project. We also use Citizen Voting Age Population (CVAP), which accounts for non-citizens, based on estimates compiled by Bernard Fraga. These data sources are all similar, but have modestly different estimates of turnout and registration rates in the 2016 election. We use VEP when possible because it provides a more accurate picture of the potential electorate, and CVAP when necessary to examine demographic information.