Miami-Dade County in Florida has had its fair share of high-profile voter suppression issues. Whether it be long lines, canceling of Souls to the Polls Sundays, or voter registration restrictions, many of the issues have directly impacted the black community. However, there is a significant and structural impediment to black political participation that is rarely examined. Political donations have a large amount of influence over the political process, and the county’s vibrant diversity isn’t represented in the county’s donor class. Black people make up one-fifth of the county’s population, but only 2 percent of donors to mayoral candidates. The donor pool for county commission candidates includes more black donors, but is still not representative. Black donors and donors with low-incomes are more likely to be small donors, who are massively outspent by large donors. This population is massively outspent by big donors. This could severely discount black interests in political considerations and reduce the black community’s stake in local politics. And the stakes for all Miami-Dade citizens are high: The county currently faces important decisions about gentrification, sea level rise, services, transportation and development.

To have a true democratic process, all communities should actively participate in all sides of the political process: being well informed, voting, and being able to support candidates for office through financial contributions. Otherwise, their voices and interests could easily be drowned out of the political process by powerful developers or other non-community interests who are able to have influence through large donations. A structural solution is to institute a comprehensive public financing system, which would empower the more diverse smaller donors to create a more representative democracy. 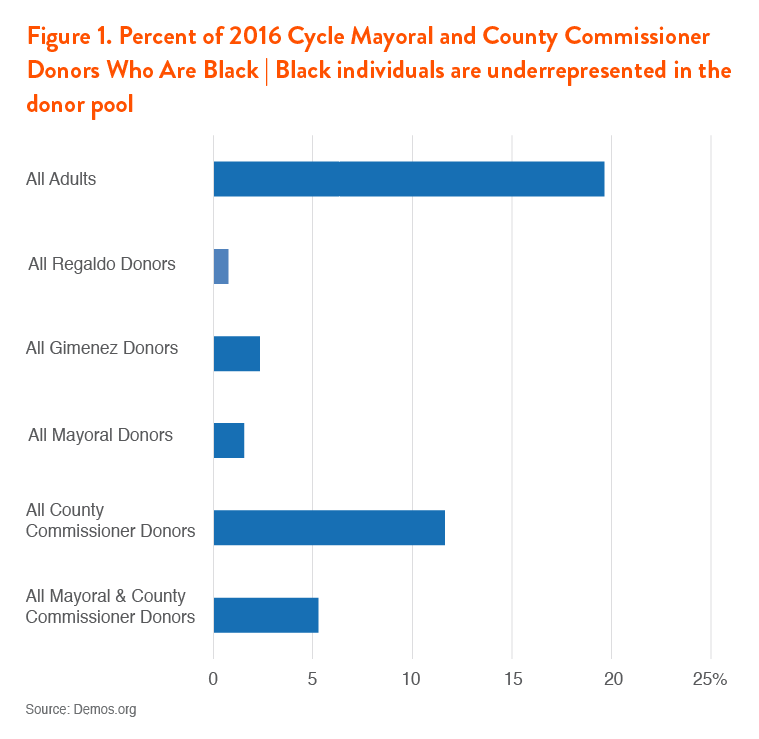 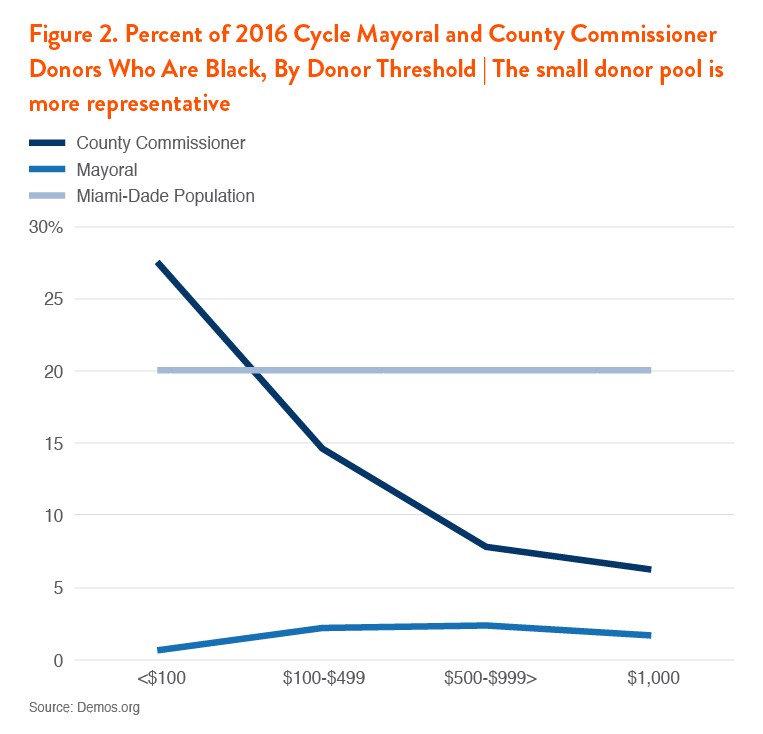 A ballot initiative is currently being circulated in Miami-Dade would encourage a more diverse donor pool and empower the county’s black population. Among important campaign finance reforms, such as lowering contribution limits, prohibiting contributions from big county contractors and their lobbyists, and strengthening enforcement, the initiative would update and strengthen the county’s public financing program. Candidates who qualify for this program would only take small donations (up to $100) and those donations would be matched six times, up to a limit. Because black individuals make up a larger share of the small donor pool, a robust public financing system would empower black voters in Miami-Dade.

The numbers are based on an analysis performed by Brian Schaffner and Jesse Rhodes of University of Massachusetts Amherst in collaboration with Demos. They used the disclosure data for Miami-Dade County to find data on contributions made during the first five months of the County’s 2016 elections for Mayor/County Commission. To find donations to each of two mayoral candidates, Carlos Gimenez and Raquel Regalado, they searched for donations made to each candidate’s campaign from October 1st, 2015 through February 29th, 2016. This provided a unique spreadsheet containing the donation amount and the name of the contributor for each candidate. They used the same time parameters in the search for donations made to the following candidates for County Commission: Bruno Barreiro, Earl Beaver, Daisy Black, Esteban Bovo, Audrey Edmonson, Barbara Jordan, Dennis Moss, Alfred Santamaria, Xavier Suarez, and Juan Carlos Zapata. These search criteria returned three spreadsheets (one for each mayoral candidate and a third for the commission candidates collectively), which contained the amount and source of each donation. They used the name and address of each candidate to match these files into Catalist, a voter file database. The match rates for each file are listed below.