Until voters and elected leaders in Baltimore, Maryland took action to bring small donor public financing to their elections, big money in politics was a growing problem in the city.

Until voters and elected leaders in Baltimore, Maryland took decisive action to bring small donor public financing to their elections, big money in politics was a growing problem in the city, where nearly two-thirds of the residents are Black. Large contributions were driving expensive election campaigns that led to policy outcomes favoring the interests of donors over the needs of the broader public.

The average contribution to the winning mayoral candidate nearly doubled between 2007 and 2016, soaring to $1,119—an amount well beyond the reach of most city residents. The winning 2016 candidate spent about $3 million—the same amount as all the 2007 candidates combined. Donors to the 2016 mayoral and City Council elections were 64 percent white and 59 percent male, and nearly half of donor households made over $100,000 per year. The city of Baltimore, on the other hand, is 30 percent white, 47 percent male, and only 20 percent of the population makes $100,000 or more.1

At the same time, Baltimore residents were frustrated with city priorities that were out of step with urgent public needs. They saw how their schools and parks were starved for funds, while the budget for a police force rife with corruption was constantly growing, and a robust campaign to reduce and redirect police funding into the city’s parks and recreation was thwarted by a City Council beholden to outside money. They saw the Fight for $15 living wage campaign fail in the council, even as their elected leaders pushed through a highly controversial $1 billion TIF (Tax Increment Financing) that would redirect immense city resources into the coffers of big business and the development industry. Baltimoreans witnessed how, year after year, they were told that there was no money to fund school buses or to fix up their communities, but there always seemed to be money when an elected leader had a pet project that benefited a developer or, as it turned out, a donor.

The people of Baltimore wanted a change, and Black leaders in the community and on the City Council came together to consider solutions. They created the Baltimore Fair Elections Coalition, the multiracial, grassroots coalition of more than 20 organizations that led a successful organizing campaign to create more reflective elections and more responsive lawmaking by bringing small donor public financing to Baltimore.

“The beauty of the coalition was there were people who always work on these types of issues, and there were groups who never work on these issues, that are much more involved in grassroots organizing on things like tenants’ issues, for example. But there was a central thing that frustrated everyone’s progress. Across all our fights, we could clearly see the same roadblock: the control of our politics by big money, especially big money from outside the city.” 2

The first step for the coalition was to place small donor public financing for elections on the ballot as an amendment to the city charter,3 and then to convince the people of Baltimore to vote in support of the program. Once they amended the city charter, they would then have to pass a specific public funding program through the City Council.

At the outset, organizers geared up for a difficult fight. The city had just cut funding for public transit for students to get to and from school and afterschool activities, and Baltimore was struggling to find the resources to pay for other essential programs and services. Coming up with an extra few million dollars to pay for Fair Elections—and, just as important, convincing the public it was a necessary investment if there was going to be change on anything else they cared about—seemed like a major barrier.

But once the coalition began organizing, they realized their work with the public would be easier than they thought. Through canvassing in public housing and on college campuses, town halls with diverse audiences, leafleting at festivals and churches, and more, it became clear that Baltimoreans got it. The people of Baltimore understood that nothing was going to change on the issues they faced on a daily basis until the underlying problem of big, outside money ruling Baltimore politics was addressed. And they saw that, as Baltimore NAACP President and leader within the coalition Reverend Kobi Little put it, Fair Elections “will put small donors at the center of elections, ensuring that we all have equal opportunity to influence their outcome,”4 and, in turn, a bigger say in what their leaders would prioritize and fund. 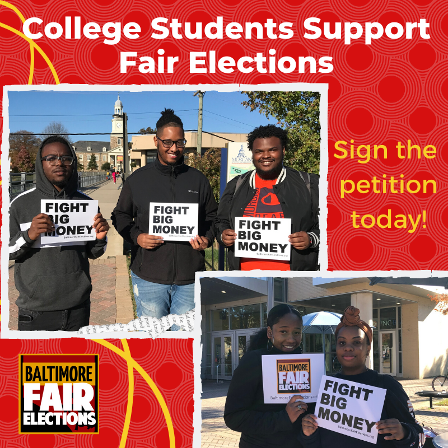 After months of canvassing and conversations with the people of Baltimore about “Question H,” the coalition won a resounding victory at the ballot box in November 2018, with 75 percent of Baltimoreans voting to support the amendment.5 The coalition then deployed a sophisticated inside-outside strategy, through which groups worked closely with champions on the council to craft legislation creating a robust, equitable small donor public financing program, while also continuing to organize and build the enthusiasm for the program among Baltimoreans that would be required to push the council and mayor to support the implementing legislation. In January 2020, after months of advocacy and mobilization, the Baltimore Fair Elections Coalition succeeded in pressing the council to pass and the mayor to sign one of the nation’s strongest, most equitable small donor public financing programs.6

At each step of the way, these uphill battles and unlikely victories were driven by Black leadership in the community and on the council. The broad-based public support the Baltimore Fair Elections Coalition built was aided by a cohort of champions on the City Council, who themselves had won their elections with the support of small donations from regular Baltimoreans. Chief among them was Fair Elections champion Councilmember Kristerfer Burnett, who understood that “if we’re going to restore trust in local government, we have to take the influence of big donors out of the equation and make sure that people with great ideas are the folks who are winning elections in Baltimore.”7

While the program will not go into full effect until 2024, the campaign itself was a clear victory for the Black and brown people and the working-class communities of Baltimore, who now have a greater say in who can run for office, who wins, and how they govern. Black community leaders, including the heads of organizations critical to the effort, have expressed optimism regarding what the new way of electing leaders will mean for Baltimore’s future.

Joanne Antoine, who is the Executive Director of Common Cause Maryland and who played an important role in mobilizing the community in support of Fair Elections, described the potential for impact on civic participation among Black and brown Baltimoreans in particular:

“The Fair Election Fund has the potential to shift candidate behavior in the city entirely, enabling people to run for office based on support from Baltimoreans instead of special interests. We saw that happen in Montgomery County [Maryland], where small donor participation increased—numerous first-time donors were activated, many from Black and brown communities of varying ethnic backgrounds, most of which were typically not engaged until the very last minute. I believe we’ll see similar change in the city once the program is fully funded and available for use, ensuring Baltimoreans have their voices heard in city elections and a greater opportunity to participate in our democracy."

When asked about how she anticipates small donor public financing will impact policy and politics in Baltimore, Charly Carter stated simply, “We will be able to elect leaders who are much more connected to community, and leadership in Baltimore will be much more reflective of our people. That’s what I expect to happen in the future.8