Washington, DC – Today, Demos, a New York-based public policy organization, released new polling and messaging research that shows Americans strongly favor policies that enable students to graduate from college without debt. According to the poll, 78 percent of respondents, including 90 percent of young people, 86 percent of African Americans, 84 percent of Latinos, and 91 percent of Asian American and Pacific Islanders, favored a policy that would ensure all students can graduate from public 2- and 4-year colleges without debt. Over 7 in 10 voters also support policies that provide financial aid to low-income students and make public 2- and 4-year colleges tuition free for all households. 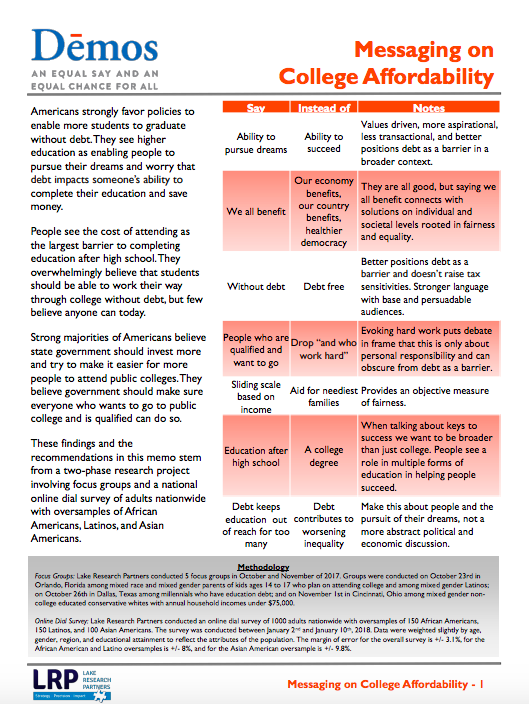 “We all stand to benefit from bold new investments in public higher education that would make college affordable and remove the burden of crushing debt,” said Mark Huelsman, Senior Policy Analyst at Demos. “It’s time for lawmakers to listen to the broad coalition of Americans who support investing in pathways to help everyone afford college and follow their dreams.”

The poll was conducted by Lake Research Partners and surveyed 1,000 adults nationwide between January 2 and January 10, 2018. Additional key findings include:

In addition, Demos is releasing a series of messaging recommendations on college affordability for advocates and policymakers based on the poll and a series of focus groups conducted by Lake Research in October and November 2017. This research finds that messages highlighting the benefits of higher education to society, as well as highlighting the financial consequences of burdensome education debt, resonate strongly with a broad cross-section of Americans.

This research is part of a series of reports looking at the burden of the rising cost of college. Last month, Demos released a Congressional Yearbook that showed what Congress members paid for college, as well as a report titled “The Unaffordable Era: A 50-State Look at Rising College Prices and the New American Student,” about how public college costs are making higher education less public.

Since 2006, Demos has been a leader in advancing policy solutions to address the college debt crisis facing America’s students. After years of studying the trends in funding for higher education at the state level, Demos released a policy blueprint in 2014, titled The Affordable College Compact, under the leadership of Tamara Draut, Vice President of Policy and Research. For the first time, the compact outlined a detailed approach to achieve debt-free college through federal-state partnerships, with the goal of making public higher education more affordable for all students.

Read the full messaging recommendations from the survey and focus groups

Read the full results of the survey

Does America's preferred student loan repayment program work? 'That is the big question'

“This stuff is hard and necessary to untangle… [but] we should actually start over.”
In the media
Aarthi Swaminathan
Image