How States Can Lead to Advance Voter Registration at Federal Agencies

Voter registration operates as a tool of racist voter suppression and has long been weaponized to silence communities of color. Advocates and Election Officials in states have the opportunity to change this by designating federal agencies in their states as sites of voter registration.

Year after year, voter registration is one of the single biggest barriers to voting. And it’s a barrier that disproportionately keeps Black and Brown Americans from full participation in our democracy. People in power long have weaponized voter registration to prevent communities of color from voting. In fact, requirements to register before voting were designed, in part, to keep Black people, working people, and immigrants from voting.1 The result is severe disparities in registration rates by race and ethnicity. 2 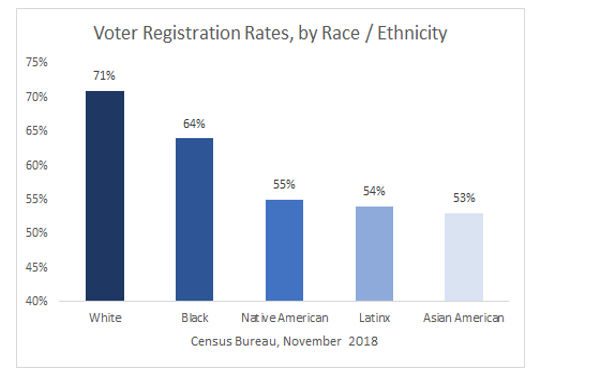 We know that when Black and Brown people can vote, they do vote. In 2016, 87 percent of registered voters across race and ethnicity turned out to vote, compared to just 56 percent of the voting age population.3 But because registration operates as a tool of racist voter suppression, far too many Black and Brown people cannot vote in each election only because they are not registered.

Today, however, we have a significant opportunity to reduce the role registration plays as a barrier to voting by providing voter registration at federal agencies that interact with voting-eligible people.

The Opportunity: Untapped Potential in the National Voter Registration Act

Congress passed the National Voter Registration Act (NVRA) in 1993 to address the discriminatory role registration plays in our elections and to help close the gap in registration rates between communities.4 The NVRA has played an important role in progress toward this goal over the last 25 years,5 particularly by requiring states to register eligible people who transact at state and local agencies like the DMV and at public assistance and disability offices.6

But the NVRA has another provision, largely untapped to date, that could take this progress even further. In addition to requiring states to conduct voter registration at certain specified offices, the NVRA requires states to designate additional voter registration agencies and offices and includes “federal and nongovernmental offices” among suggested sites.7 Excitingly, President Biden recently issued an Executive Order Promoting Access to Voting8 that strongly encourages implementation of this underused provision of the NVRA. The President’s EO requires that agencies accept any state designations to the greatest extent practicable and mandates that, if they decline such a request, the head of the agency provide the President with a written explanation as to why.

States committed to closing registration gaps and bringing all their eligible citizens into the voting process can take an important step toward doing so by designating federal agencies that transact with residents in their states as voter registration sites under the NVRA.9

In the past, several states made such designation requests, though there was no EO requiring agencies to make this a priority, and the designations had limited results. For example, California’s Secretary of State requested that U.S. Citizen and Immigration Services (USCIS) consent to have naturalization ceremonies conducted in California designated as voter registration sites. North Carolina’s Board of Elections Executive Director requested that offices of the Indian Health Service (IHS), part of the Department of Health and Human Services, be designated as voter registration agencies in that state.

While federal agencies have been reluctant to engage in voter registration activities to date,10 it was clearly the intent of the NVRA that the federal government be actively involved in providing voter registration services. When enacting the NVRA, Congress found it is the “duty of the Federal, State, and local governments to promote the exercise of [the] right [to vote].”11 In issuing the March 7th EO, President Biden demonstrated a strong commitment to achieving this goal, a goal that is also consistent with the Administration’s forceful commitment to racial justice12 and to building a more inclusive democracy.13 By placing affirmative pressure on the federal agencies to make every effort to facilitate expanded opportunities to register to vote, this simple but powerful change is more possible than ever.

How and Where to Designate Federal Agencies as Registration Sites

The process for designating in-state federal offices as voter registration sites varies from state to state. In some states, the relevant state official—either the Chief Elections Officer or another official designated by state law—simply submits a formal requests to the relevant federal agency(ies), and the agency must then accept designation for it to take effect. In a small handful of states, the legislature must make a change to statute to formally request designation. Demos and the ACLU have researched the process in the states and can help you determine how best to move forward in your state.

To address the persistent inequities in access to voter registration, states should consider requesting designations at agencies that primarily serve Black and Brown Americans. In particular, states should prioritize requesting designation from IHS, which serves Native American communities who are among the most excluded in our democracy, and where the opportunity to register could make a big difference.14 Likewise, improving registration at USCIS naturalization ceremonies conducted by USCIS would reach new Americans, bringing a group that consists overwhelmingly of people of color into the democratic process at the earliest opportunity; in 2019, 834,000 new Americans were naturalized at these ceremonies, many of whom may not be registered elsewhere.15 In addition, states can consider requesting designations from offices within the Departments of Housing and Urban Development (HUD), Health and Human Services, Education, Labor, Defense, Veterans Affairs and others.

The Urgency of This Moment

While our democracy has never welcomed participation from all communities equally, the imperative to build a multiracial, inclusive democracy is as urgent as ever today. There is no time to waste in building a more inclusive democracy that reflects the rich diversity of our nation. Ensuring federal agencies that engage with members of the public offer meaningful opportunities to register to vote is an important—and decidedly achievable—step in that project.

More on the Executive Order on Promoting Access to Voting