Democracy Means All of Us: How to End the Chronic Silencing of Black and Brown Voters in New Mexico

New Mexico is failing to enable Black and Brown communities to access their fundamental right to vote.

Key Findings from the June 2020 Primary

Democracy and resilience go hand in hand in New Mexico. As a global pandemic has raged through the state, disproportionately impacting the lives of working-class Black and Brown communities, our strength has been tested yet again. In the midst of uncertainty and fear, we have continued to fight for our rights and show solidarity with one another. But we cannot do it alone.

This year marks one of the most consequential elections of many of our lifetimes. While accessing the ballot has never been easy for working-class Black and Brown communities,1  the disparate impact of COVID-19 along racial lines,2 and an unwillingness by the courts and state legislature to give the Secretary of State and county clerks the ability to mail ballots without adding extra steps,3  threaten to silence our voices. This may come as a shock to some, because the official story from the mainstream press has focused on record turnout in the primaries and the success of vote-by-mail and absentee balloting.4  While it is true that these options provided a safe alternative to in-person voting for many, as our analysis shows, those who were able to vote by mail were overwhelmingly white, while Native, Hispanic, and Black voices were once again marginalized. We can, and must, do better.

What the numbers bear out is a story about differential access in New Mexico, based on race and on class. This is voter suppression. In a time of economic crisis, we are asking people to vote by mail as they are losing their homes, or forcing people to travel miles to post a ballot because they lack a USPS mailing address.5  Tools like online voter registration, while critical, are meaningless for communities that lack high-speed internet access. Ballot materials only in English and Spanish are insufficient for New Mexicans who speak other languages. Polling locations unevenly distributed throughout counties prevent in-person voting for those without public transportation or sufficient job flexibility to wait in line.

These injustices are familiar to us. They derive from policy choices, inaction, and neglect. However, there is another, darker, undercurrent both in New Mexico and throughout the country, from Oregon to Missouri to New York. That undercurrent is voter intimidation and the threat of violence. In New Mexico, that has taken the form of white supremacist militia groups who infiltrate peaceful protests and who may just as easily show up at the polls this November.6  These are people who deeply fear the political power of Black and Brown voters and who have quite literally taken up arms to fight against it. There are also bad actors within state government who benefit from low voter turnout. They have tried to put up barriers to making voting easier and more accessible, and they do so at the risk of compromising our elections and forfeiting one of the state’s most sacred responsibilities: to protect New Mexicans and to strengthen democracy.

What militia groups, outgoing lawmakers, and some election officials who seek to restrict access to the ballot are not counting on is the courage, commitment, and resilience of our communities. We are not afraid. We will not be scared off from the polls, we will not stay silent about the threats and intimidation, and we will hold the state accountable this year and every year.

In the analysis that follows, we looked at turnout data for the June 2020 primary to understand how the intersecting barriers of COVID-19 and racist voter suppression schemes are affecting New Mexicans’ ability to participate in our elections and our democracy. Their impact is striking: across nearly every single candidate race and geography we examined, Native American, Hispanic, Black and Asian American New Mexicans had less access to voting in this year’s primary than white New Mexicans.

First, we looked at the use of absentee ballots among New Mexican voters, as well as rates of in-person voting, by race and ethnicity. The findings suggest what we know to be true across the country: voting by mail is less accessible to Black and Brown voters—and is particularly burdensome and inaccessible to Native American voters. They also suggest that, despite the risks inherent in showing up to vote in person during a global pandemic, Black and Brown New Mexicans will do so, if they are able, in order to make their voices heard. 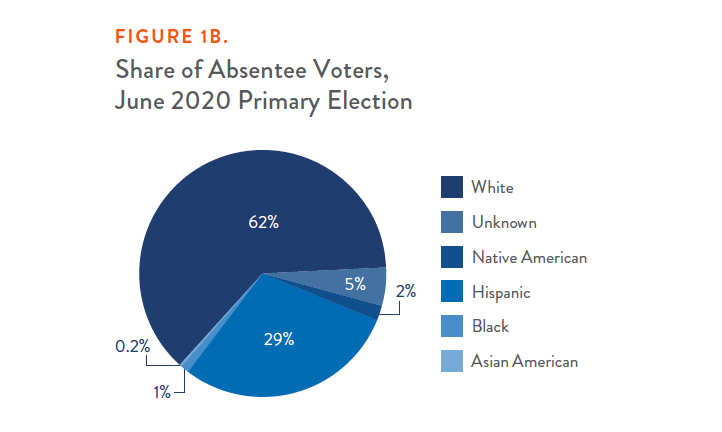 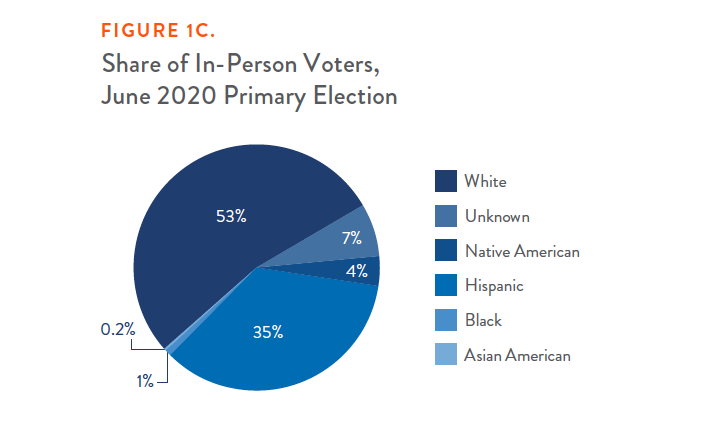 To understand how these trends played out across the state, we looked at 10 counties with significant populations of New Mexicans of color, finding that across nearly every county, turnout among Hispanic voters, Native American voters, Black voters, and Asian American voters was lower than that of white voters, in most cases significantly lower. Clearly, long-standing barriers to the ballot box and civic participation, coupled with the pandemic and new threats erected to keep Black and Brown voters out, are taking a significant toll on New Mexico’s democracy. 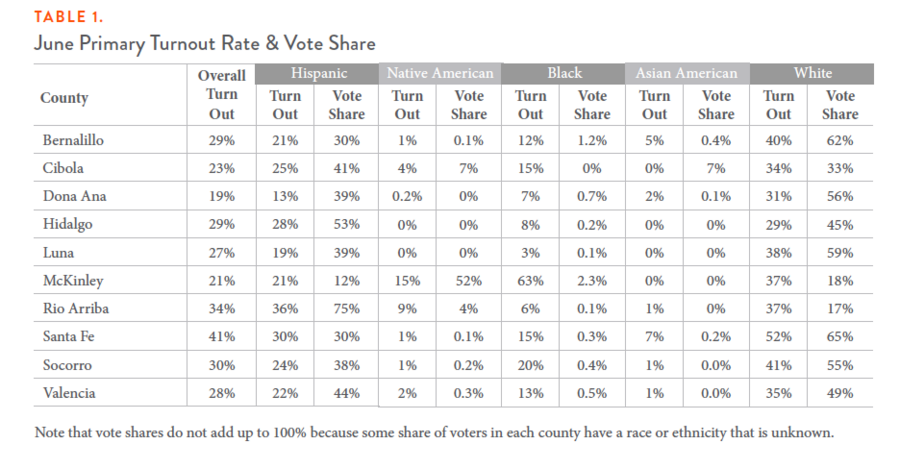 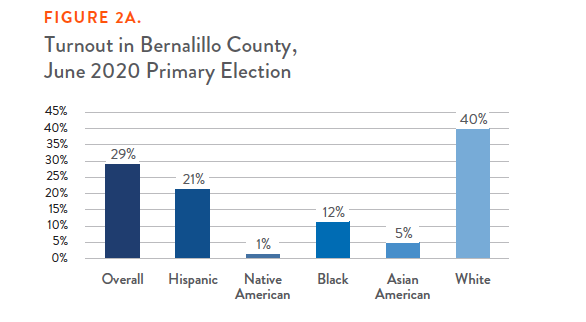 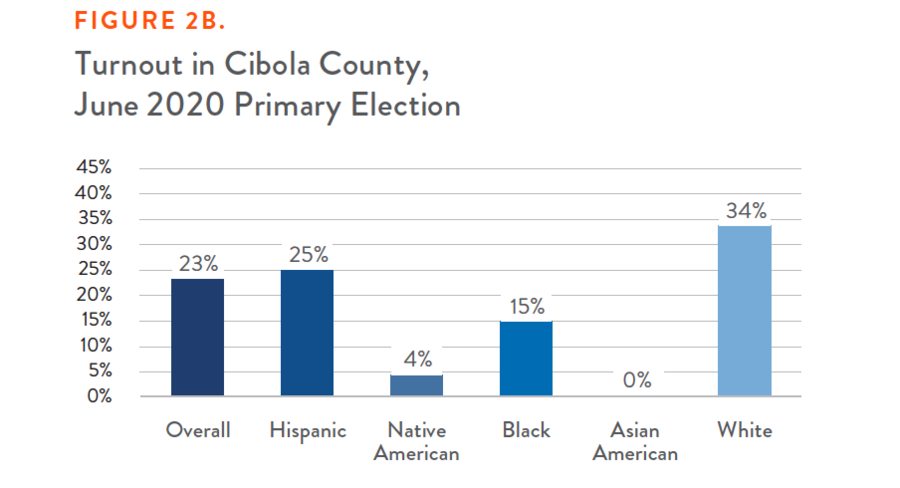 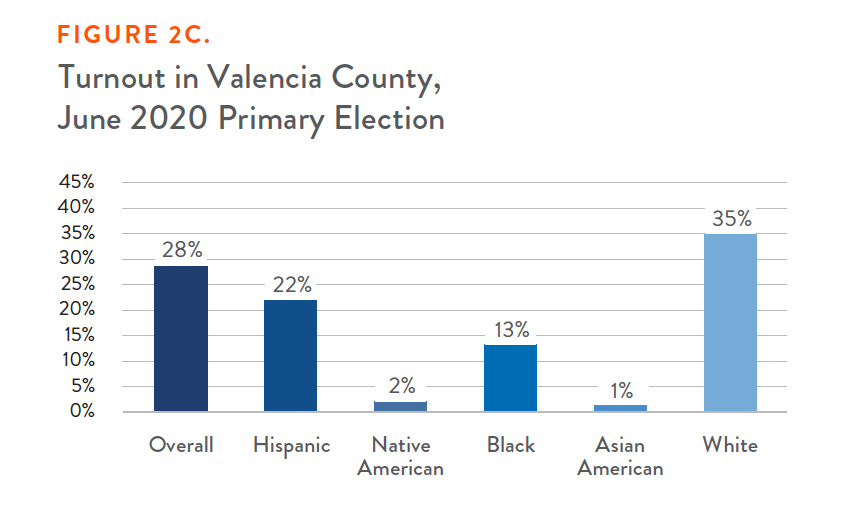 We see similarly troubling gaps in who was able to turn out to vote in 5 key state senate races this June. With one exception in Senate District 4, barriers to civic engagement and the ballot box meant Native Americans, Hispanic, Black, and Asian American voters all turned out to vote at much lower rates than white voters in these critical races. These Black and Brown New Mexicans also represented vote shares well below their share of the population. 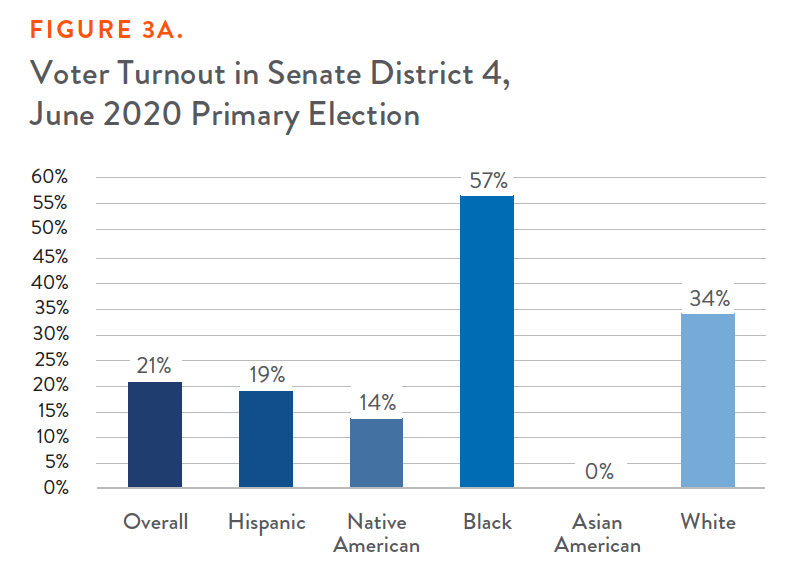 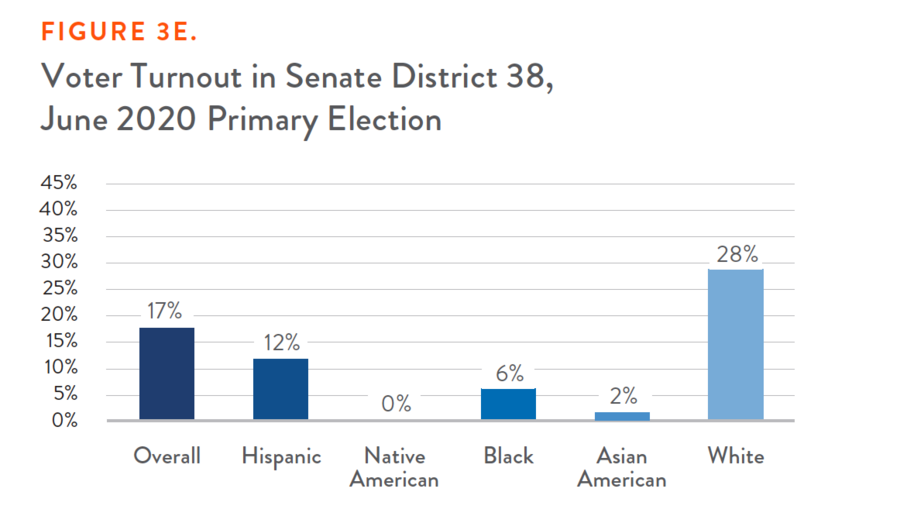 While grassroots organizers engaged in tremendous efforts to connect with and support voters in these key state senate districts, the collective impact of policies that make it harder for Black and Brown people to vote, and intimidation tactics aimed directly at these same communities, mean that racialized turnout gaps persisted.

While the story of voting in New Mexico is of course more nuanced than what a single turnout analysis demonstrates, there can be no doubt that our state is failing to enable all communities to access their fundamental right to vote. The kinds of policy solutions that are necessary to bring democracy in New Mexico into balance are far beyond the piecemeal solutions that have been offered by the State Supreme Court, the legislature, and some local elected officials. Some policies, such as mailing only absentee ballot applications, rather than the ballot itself, have the potential to cause more harm and confusion by creating additional burdens for voters at a time when many are struggling just to survive. Yet a truly inclusive democracy is well within reach. The challenges of this brutal year have been considerable, but they have also illuminated inequities and barriers so large that they can no longer be ignored. The elevation of these issues provides a platform for bold reforms, and we are confident New Mexico is ready to meet this moment.

For too long, voting infrastructure has been built around the needs and norms of middle- and upper middle-class white voters, who we can see consistently outstrip all other communities in turnout. Rather than creating law and policy around those who already have the most access, New Mexico must center those with the least access, starting with Native American New Mexicans. The activism of Black and Brown communities proves that depressed voter turnout is not voter apathy, a myth that is too often used to excuse inaction on the part of the state and local governments. We need solutions that address the intersectionality of access to the ballot, which is dependent on everything from housing, to transportation, to workplace flexibility, to childcare, to English, Spanish, and Native language proficiency. Finally, we need the courage to call out and fight back against tactics of violence and intimidation designed to keep people from the polls.

We accessed voting totals by county and state senate district using the New Mexico Voter Activation Network (VAN), which uses models to project race and ethnicity for New Mexican voters. We accessed population data, including race and ethnicity, age, and citizenship status, by county and state senate district using the latest data available from the Census. Our analysis considers all citizens age 18 years or older as a county or state senate district’s eligible population, whether or not they are registered to vote or have a party affiliation. Those who are not registered, or who have registered but declined to affiliate with a political party, are nonetheless important voices in our democracy. When we examine turnout among just those affiliated with a political party, and therefore allowed to vote in the June primary, we see the stark gaps by race and ethnicity persist.

We have not accounted for citizens of voting age who are disenfranchised due to a felony conviction, as we were not able to access these data at the county nor state senate district level, nor could we access precise estimates of disenfranchisement by racial and ethnic group in New Mexico. In 2016, the Sentencing Project estimated 1.53 percent of all New Mexicans were disenfranchised due to a felony conviction. When we calculated turnout for each county, accounting for 1.53 percent of residents being formally disenfranchised, we found the overall turnout rate increased by about 1 percentage point in the jurisdictions we analyzed.