A Blueprint for College without Debt

America’s experiment with the debt-for-diploma system has officially failed. Total student loan debt in the U.S. now tops $1 trillion – an unprecedented sum that represents the unprecedented obstacles students and recent graduates face in their pursuit of the American Dream.

Over the last several decades, our nation slowly and steadily shifted the burden of paying for college from a public responsibility to a private one, leaving most students with debt and leaving many potential students behind. As state funding declined and tuition at state universities rose in response, federal financial aid has shifted from making college affordable through grants to lower income students to providing loans that simply help families finance a college degree.

It’s time to renew our commitment to an accessible and affordable higher education system in the United States. Debt is not financial aid—it allows students to pay for college but also raises the cost of a degree because all student loans, especially private loans, include interest charges and origination fees. The need for student loans has also created a very lucrative market for the private lenders and banks who, until 2010, profited from guarantees through the federal student loan system and who are benefiting today from the demand for financing beyond the federal loan program.

As activists across the country protest the debt-for-diploma system and its $1 trillion mark, below are the top ten reasons why our nation must embark on a new strategy to make college affordable as opposed to merely financeable through student loans.

1. From 1990 to 2010, state funding for public higher education fell 26.1 percent per full-time equivalent student, a major driver of rapidly rising tuition rates. Over the past 20 years there has been a breakdown in the historical funding pattern of recessionary cuts and expansionary rebounds. The length of time for higher education funding to recover following recessions has lengthened for every downturn since 1979 with early evidence suggesting that the recovery from the Great Recession will be no different. 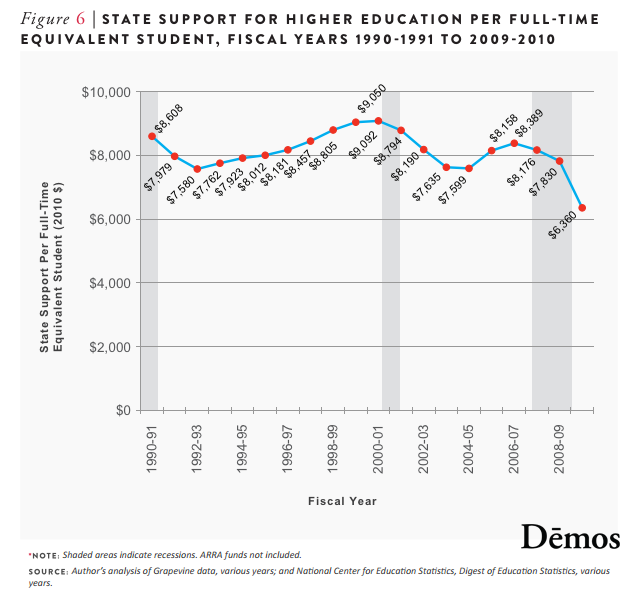 2. In 1980, 39 percent of federal financial aid to undergraduates was in the form of loans, and 55 percent was awarded in grants. By 2008, this had shifted to 64 percent of the funds awarded as loans and only 26 percent as grants. Moreover, today’s maximum Pell Grant covers just over a third of the costs of attending a public 4-year university, down from over two-thirds in 1980. 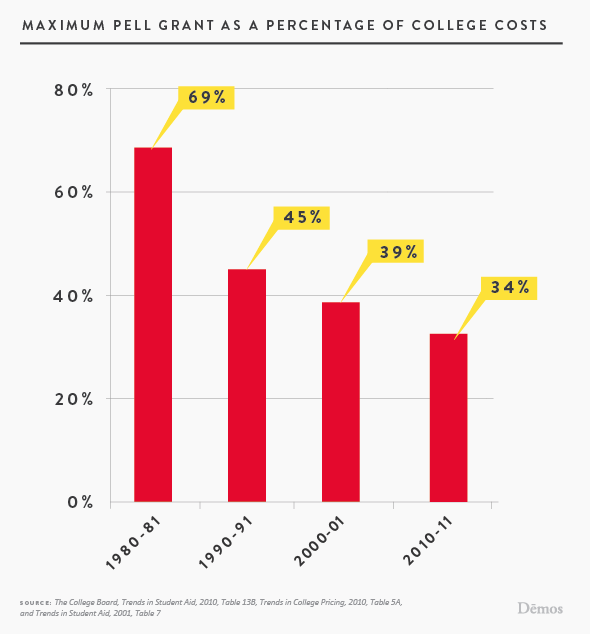 3. A lack of public investment has resulted in tuition more than tripling at public 4-year universities between 1980 and 2010.

Industry Profits from a Public Good

4. The demand for costly private student loans, often driven by aggressive and deceptive marketing by for-profit 2-year colleges, has swelled substantially in just a few years.  Private loan volume grew from $6.5 billion in 2003-04 to $17.1 billion in 2007-08.

5. Unlike any other type of unsecured loan, private student loans are now nearly impossible to discharge in bankruptcy—a major policy change successfully lobbied for by the student loan industry. The Fairness for Struggling Students Act, proposed last year by Senator Richard Durbin, would fix this unnecessary burden for students, yet it currently remains tied up in committee.

8. Today, two-thirds of students graduate with debt, at an average of $24,842. African Americans are much more likely to rely on debt to finance their degree and borrow at higher amounts, averaging $28,692. 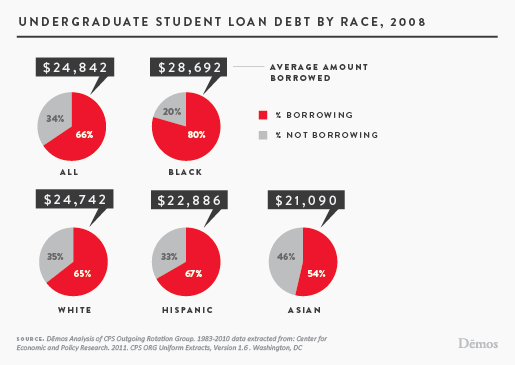 9. From 2007 to 2009, student loan default rates increased by nearly one-third: In 2009, 15 percent of graduates from for-profit colleges were in default. A March 2012 report from the New York Federal Reserve confirmed that 30 percent of student loan borrowers currently have past-due balances of 30 days or more.

10. The shift toward privatizing the costs of public higher education is one of the contributors to the Unites States falling behind other advanced nations in college attainment: The United States has the best educated older population in the world but among 25-34 year olds, we rank 10th.