Young Voters Will Pull Democrats To The Left

Since the election, the Democratic Party has been doing intense soul-searching—examining what has led them to the wilderness, out of power in the executive, legislative and judicial branches and in many of the states. The Republican Party is in the strongest position it has been since 1928. While many in the grassroots have suggested an embrace-the-base strategy for Democrats, some of the party’s old guard have insisted on a move to the center. My analysis of the data suggests that while the pundits spend countless hours re-litigating everything from the 2016 primary to Bill Clinton’s legacy, the Democratic Party will be pulled left by an increasingly liberal base. Demos polling suggests that the Democratic base is ready for aggressive progressive action, particularly on pocketbook economic issues.

This prediction is based on my analysis of the Cooperative Congressional Election Studies 2016 survey, (description of survey). The survey includes a 7-point ideological scale on which respondents place themselves and also the Democratic Party  (from “very liberal” to “very conservative”). Using this, I can determine what share of individuals place themselves ideologically to the left, right, or the same as the Democratic Party. 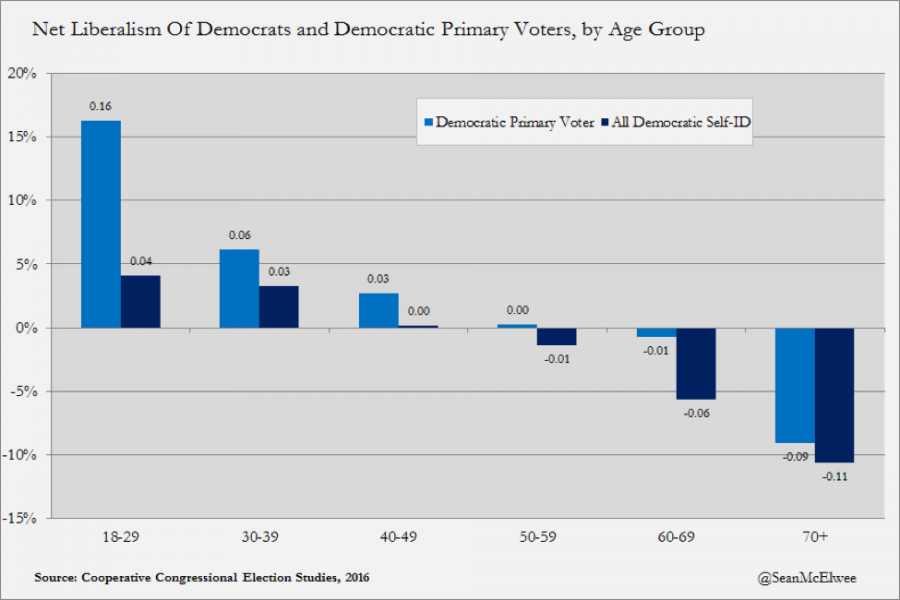 I also explored the attitudes of what might be called the “Democratic core voters”-- individuals who contribute money, volunteer in campaigns and attend political meetings. I find that these individuals understand themselves to be far more liberal than the Democratic Party, and that young people are more liberal than older folks, particularly young donors. The future Democratic fundraising base is deeply liberal, with fully 57 percent of donors ages 18-29 placing themselves to the left of the Democratic Party. 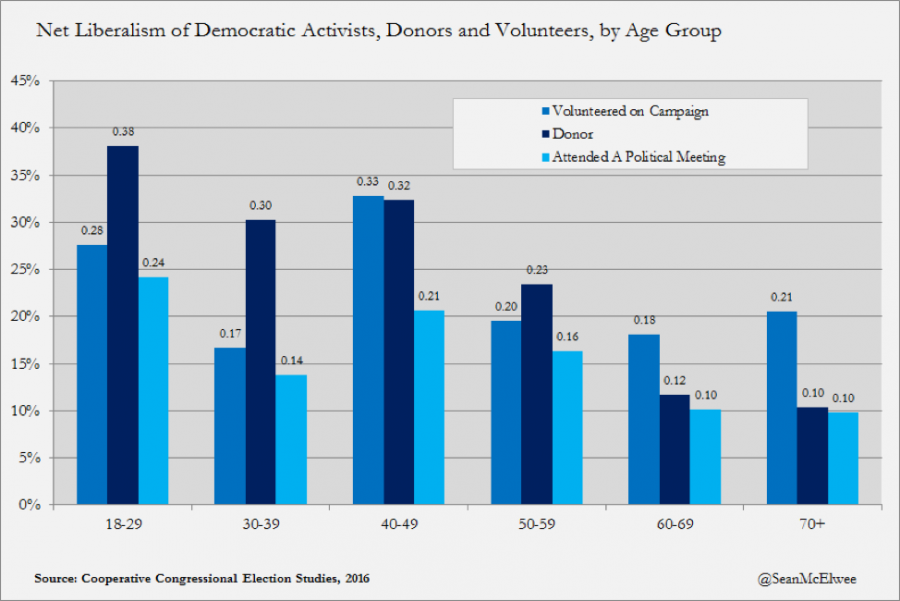 This carries important implications for the future, but it will depend on the mobilization of young folks. In 2014, the turnout rate among 18-24 year olds was 17 percent, according to Census Bureau data According to CCES data, individuals under 40 made up 38 percent of the voting eligible electorate, but only 19 percent of Democratic primary voters. In the 2018 primaries, candidates will very likely begin to be pulled left by a liberal activist base and even many donors, and as young people become a larger share of the primary electorate, this pull will grow stronger. Already, movements lead by young Latinos and African-Americans have pressed Democrats to the left on issues like immigration and police brutality.

According to Demos polling, sixty-two percent of 18-34 year olds “Strongly Agree” that “I worry about how expensive college is today and the amount of debt required to get a degree.” The top three economic issues for young people are debt-free public college, paid family and medical leave and a higher minimum wage (followed closely by affordable childcare). Facing pressure from young voters who lived through the catastrophic 2007 financial crisis, Democrats are already moving to embrace over-the-horizon policies like Medicare-For-All and debt-free college. This pressure is likely to be felt first in primary elections. The question is, which candidates will respond?

Millions to the Middle

Overview of the Economic Democracy Project & Its Case Studies

The Economic Democracy Project aims to highlight and develop strategies that Black and brown communities can use to build economic and political power—beginning with four case studies spotlighting community campaigns across the U.S.
Research