We Should Be Paying A Lot More Attention to Community Colleges

Mark Huelsman
With so many eventual graduates starting at community colleges, we should take a hard look at institutional aid policies, which reward incoming freshmen much more than transfer students.
Image
Economic Justice
Debt-Free College

Community colleges are doing more heavy-lifting than we think. So hints a new snapshot report from the National Student Clearinghouse, which found that half of all students who completed a bachelor’s degree in 2015-16 had enrolled at a community college at some point in the previous 10 years.

As expected given the de-centralized nature of American higher education, there’s considerable variation across states. In some states, particularly in the Western and Southern U.S., the vast majority college graduates interacted with the community college system somewhere along the way. 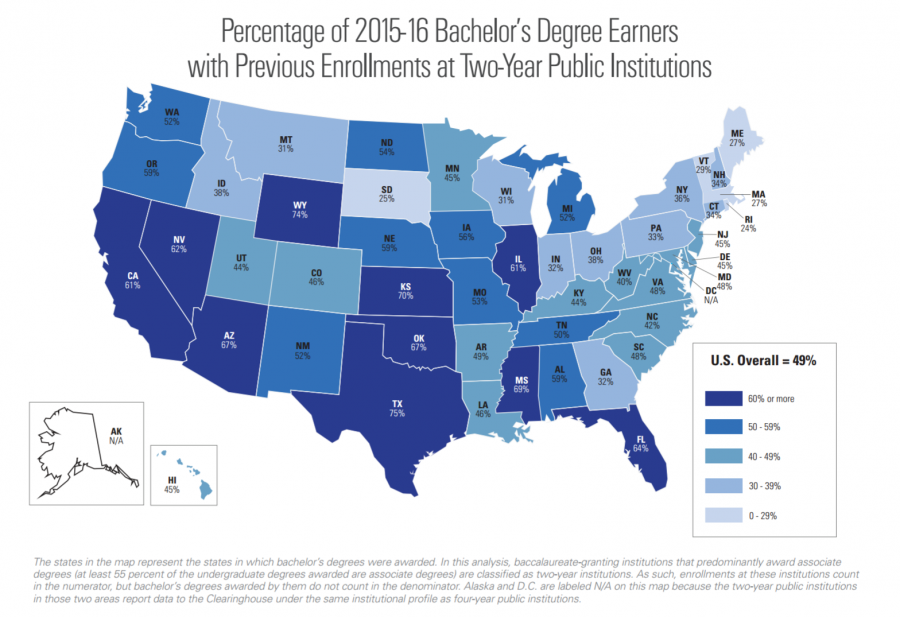 So why does this matter?

For one, it should remind us that college-going is not a linear exercise for many students. Transfers and changes in enrollment (from full-time to part-time, and vice versa) are the norm. And the system is made even more complex by the timing and structure of our financial aid system, which leads students down an uncertain path while rarely meeting their full financial need. With so many eventual graduates starting at community colleges, we should take a hard look at institutional aid policies, which reward incoming freshmen much more than transfer students.

Second, the amount that community colleges are contributing to college attainment is far greater than graduation rates would have you believe. The College Scorecard, by far the best consumer tool to date for students and families, still provides graduation rates for full-time students enrolled in college for the first time. This obviously doesn’t describe your garden-variety student at a community college, but it also doesn’t pick up on the fundamental transfer mission that many of these schools hold. Remember that the next time someone compares the nominally-similar graduation rates of community colleges and for-profit schools.

But most importantly, the fact that so many bachelor’s degree holders have interacted with the community college system builds the case that we should provide far greater funding for these schools than we do. Richard Kahlenberg at the Century Foundation has long noted that, even after accounting for research dollars, private colleges and public research institutions spend far more per-student than community colleges on education and receive much greater public subsidies.

Some states have seen particularly drastic cuts on the community college side. Arizona, for one, zeroed out funding entirely from two of its largest community college districts last year. Considering 67% of four-year graduates in Arizona went to community college at some point, the state may be shooting itself in the foot by effectively increasing these schools’ price, and decreasing quality and capacity.

This has all led to a vicious cycle, in which wealthy students feel they can afford high-priced public research colleges, while those colleges receive greater amounts of direct taxpayer support and additional alumni giving. Community colleges, which enroll two working class students for every one high-income student, literally cannot raise enough from tuition to make up the gap – their mission is based on affordability and accessibility. Moreover, colleges gain political capital by having a more socioeconomically diverse alumni base – even better if those alumni end up in statehouses themselves.

We often hear talk about “meeting students where they are” in education. And even more than we thought, that’s at community colleges. One of the promises of the Free Community College movement is that an affordable option and a broader alumni base will lend greater political support, more equitable funding, and so on. But even now, given the reach of these schools, there’s a major case to be made for funding these schools, and the students who attend them, far more generously.