We Must Talk About Race to Fix Economic Inequality

Heather McGhee
The scheme to use race to divide Americans who would otherwise be united in their economic goals is the best-kept secret in American politics.
Economic Justice
Racial Wealth Gap
Democratic Reform

What if I told you the single most important solution to economic inequality isn’t an economic policy, it’s tackling racism?

For the past 40 years, the right wing has peddled a winning strategy. It sells the economic agenda of the 1% to working- and middle-class white voters through a hidden formula:

And they've been selling us this idea even as it has hurt Americans of all races whose wages have plummeted and economic insecurity has soared.

Will you take three minutes to watch and share "We Must Talk About Race to Fix Economic Inequality", a new video I've made with my colleague Ian Haney López in partnership with MoveOn? See how the right wing succeeded in this scheme and learn how we can fight back. 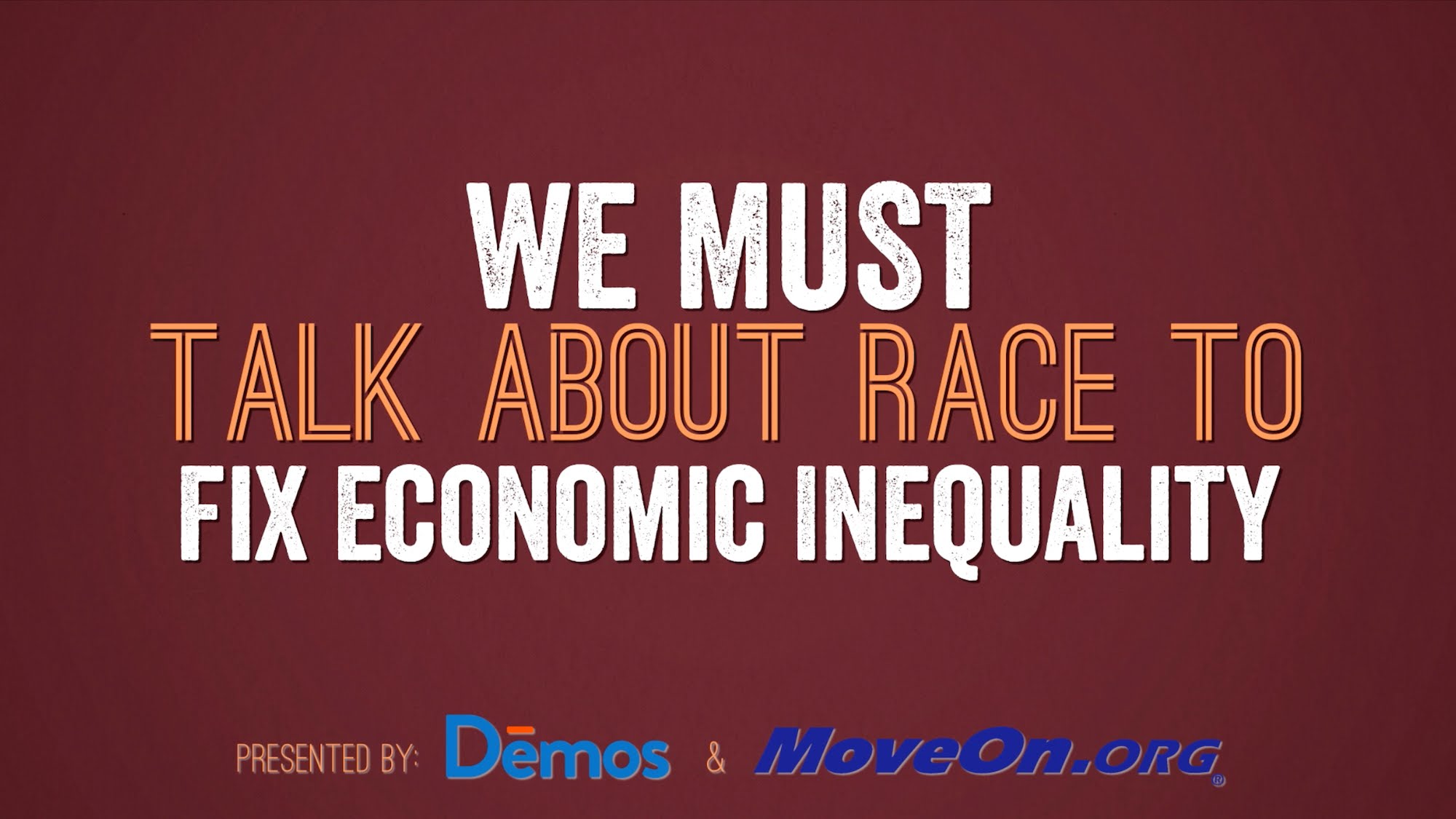 Ronald Reagan was able to draw millions of former Democrats to the GOP with this race-baiting formula. He gave us the fictional character of the “welfare queen” to prey on resentment against struggling African American families, but the real target was government and labor unions. Why? Because these are the only public institutions powerful enough to hold corporations and the wealthy accountable.

The result? No Democrat has won the majority of white voters since Lyndon Johnson. Further, this has lead to ‘The Inequality Era’: Corporations writing their own rules, tax cuts for the wealthiest, slashed social spending, and unions on the ropes.

Corporate politicians are using the same playbook today—whether it’s blatant attacks on immigrants or subtle coded language like “makers and takers” and “free stuff” to pit white voters against people of color and undermine our willingness to fight together for progressive solutions that work for all of us.

This scheme to use race to divide Americans who would otherwise be united in their economic goals is the best-kept secret in American politics—everyone knows it's true, but few political leaders are willing to address it head-on. That's why I teamed up with UC Berkeley Law Professor and author of Dog Whistle Politics Ian Haney López, my colleague at Demos, to tell this story of how racism fuels economic inequality and what we can do about. We’ve made a video with MoveOn that makes it easy to learn and share this call to action over social media and email.

We can’t win against economic inequality without addressing the right’s best weapon against a unified 99%. Everything progressives want—debt-free college, universal health care, campaign finance rules, climate change solutions, workers’ rights—requires a belief in government and trust for each other. We are better than this, and we won’t stand for politicians denying the humanity and worth of our fellow Americans. Our future depends on creating a multiracial progressive movement that will fight for racial and economic justice together, and we are ready.

Roundup: The State of the Union, the Grassroots’ 2020 Agenda, and the Houses’ Latest Bills

The dominance of big money in our politics makes it far harder for people of color to exert political power and effectively advocate for their interests as both wealth and power are consolidated by a small, very white, share of the population.
Research
Adam Lioz