Walmart is under scrutiny after claims that their political action committee is using illegal methods to persuade employees to donate to its PAC. The complaint, filed with the FEC, alleges that Walmart is breaking federal election law by matching employee donations to Walmart's PAC with a donation to a charity owned by Walmart.

The company claims to support their low-income workers through an in-house charity, the Wal-Mart Associates in Critical Need Fund, and a political action committee, PAC for Responsible Government, which supposedly fights for employee interests. Walmart workers are already paid at a rate that keeps many from escaping poverty, relying on food stamps and other forms of public assistance to support themselves and their family, even when working full time. Last minute and part-time scheduling keeps many employees from earning benefits and getting additional jobs.

A recent report estimated the cost to taxpayers of Walmart workers’ total reliance on public assistance is $6.2 billion a year. While Walmart has the ability to raise wages, hire more full time workers, and still profit without needing political intervention, they have instead used their reputation as the largest employer in America to set a very low standard for what it means to work in retail.

A complaint by Common Cause, Public Citizen, and Our Walmart, the union backed organization that also filed the complaint against the Labor Board for Walmart’s illegal punishment of workers, was filed because of Walmart's biannual program for those who donate to the Walmart PAC, who will get their donations matched, doubled and given to the Walmart's in-house charity.

The charity gives money to Walmart employees during economic hardships, including in the wake of natural disasters, and the donor would not be excluded from receiving benefits from the charity in the future. In the complaint, it is claimed that past donors were also charity recipients, a direct violation of the Federal Election Campaign Act.

The introduction of this incentive in 2004 coincides with the greatest annual increase of the PAC’s contributions, and in 2013, employee contributions totaled over 31% of the charity’s total revenue. 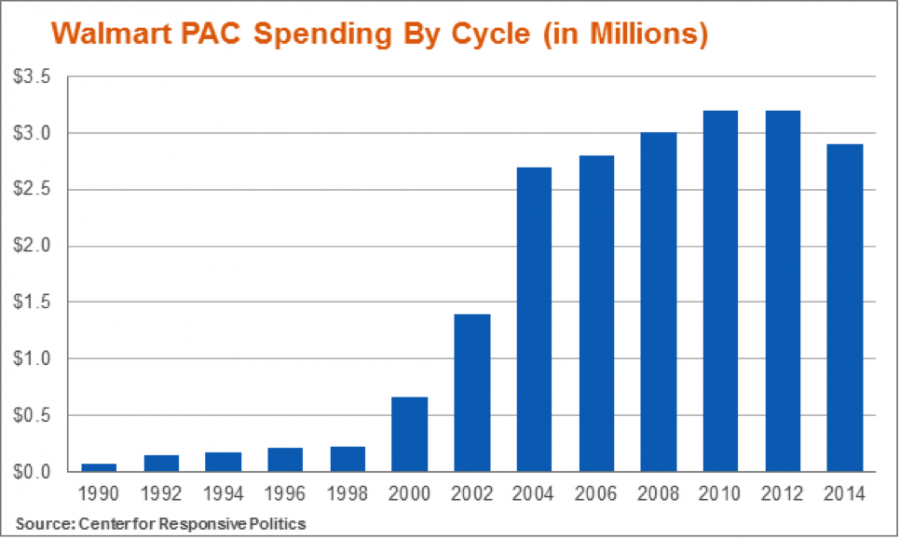 The practice of matching donations for charity is controversial, but legal under current election law. However, Wal-Mart gives, by far, the greatest incentive to donate to their PAC. A campaign finance lawyer tells Bloomberg that, “It’s rare for a corporate PAC’s charitable match program to be restricted to a charity that the corporation wholly controls and finances.”

According to the Federal Election Commission’s Campaign Guide for Corporations and Labor Organizations:

“A connected organization [a term applying to Walmart as the PAC’s corporate sponsor] may encourage contributions to the PAC by pledging to match all or a portion of a contributor’s gift to the PAC with a donation to charity.

The employee or member making the PAC contribution may designate a charity that is tax-exempt under 26 U.S.C. §501(c)(3) to receive the matching gift from the connected organization, but he or she may not personally receive any financial or tangible benefit (such as a tax deduction or a premium from the recipient charity) as a result of the connected organization’s gift."

The Walmart matching program matches more than just all of the contribution, does not allow donors to designate a charity, and allows donors to receive a benefit by claiming economic hardship and receiving financial support from the charity.

Since 2000, Wal-Mart has spent more on federal politics than any other retailer. 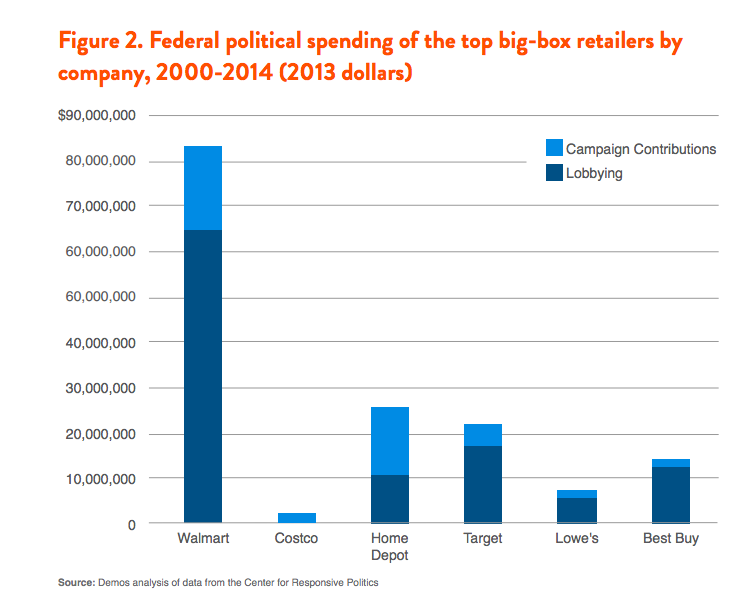 Demos recently released Retail Politics, a report that examines how political spending by retailers is associated with political control. Demos cited a study showing that companies who contribute to candidates are Members of Congress who voted for the bill had an average of twice as many campaign contributions from the finance/ insurance/ real estate industry than those who voted against it. 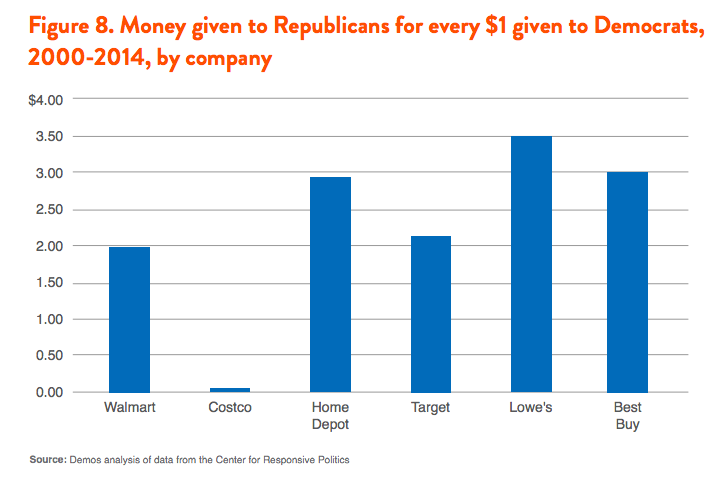 Walmart political contributions favored Republicans candidates 2:1 over Democrats between 2000 and 2014, supporting big business policies such as extending the Bush Tax Cuts and attempting to repeal the Affordable Care Act, neither of which benefit the employees at Walmart. Almost 60% of the PAC’s campaign contributions for the House of Representatives went to candidates who opposed minimum wage increases.

Walmart is benefitting from every angle of this campaign finance manipulation. Keeping wages low, doubling revenue to their PAC, and keeping the political control in the hands of the top 1%.

Dēmos President on House Approval of Build Back Better Act

"For the sake of millions — people watching their rents go up while their wages don’t, parents who need support in tackling the ever-rising cost of child care, and seniors who regularly must decide whether they can afford their bills or their pills — the Senate must pass this legislation.”
Press release
Taifa Smith Butler
Image