Since 2006, states across the country have implemented strict voter ID laws, which require photo identification at polling places. Extensive research has suggested that these laws are motivated by racism and partisanship. But many commentators (even at liberal-leaning outlets) have dismissed the impacts of these laws, despite clear evidence that they have disproportionate impacts on young people, people of color and low-income people. A new memo from Priorities USA and Civis Analytics provides evidence that voter ID laws successfully disenfranchised voters in 2016.

Civis and Priorities also find that these laws disproportionately harmed black voters, by examining how black turnout changed at the county level between 2012 and 2016. As the table shows, turnout out in counties with a high black population share dropped by 2.2 points in states where ID laws did not change, compared to a 5 point drop in states where a strict ID law was implemented.

Finally, Civis and Priorities compared turnout changes in counties in Wisconsin (which passed a strict ID law) and Minnesota (which did not, and has demographics similar to Wisconsin), by the percentage of African Americans in the county. As the chart shows, turnout in highly black counties declined dramatically more in Wisconsin than in Minnesota. Civis estimates that the turnout decline attributable to voter ID in Wisconsin was enough to swing the state from Clinton to Trump. 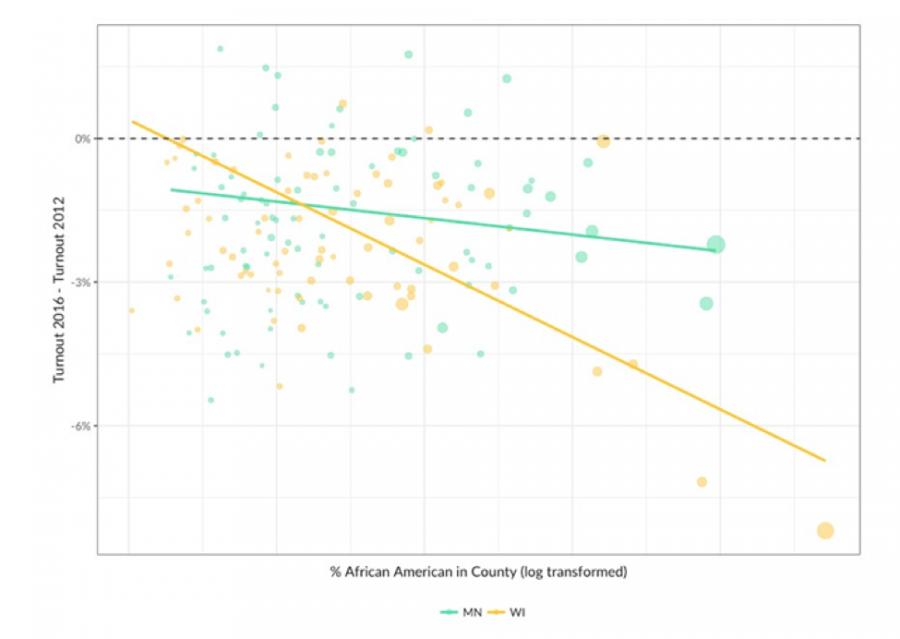 This analysis builds upon other academic research suggesting that voter ID laws have dangerous implications for democracy. Voter ID is only one way in which policymakers suppress votes of people of color. Felon disenfranchisement, poll closures, early voting cuts and onerous registration deadlines also suppress votes. Collectively, these practices can suppress millions of votes, leading to a less equitable democracy and shifting election outcomes.