Trump’s Anti-Immigrant, Anti-Muslim, Anti-Local Democracy Executive Orders Are Discriminatory and May Be Unconstitutional

In the first few days of President Trump’s administration, our nation has already seen a direct assault on our democracy. His dangerous anti-immigrant Executive Orders issued today threaten to destroy our foundation as a free society. Throughout history, we have seen how walls divide communities and generate fear—yet the Trump administration’s racially discriminatory agenda strives to amplify past mistakes and dismantle any progress we’ve made. Today, the resistance must truly start, and we must band together in opposition to Trump and his Administration in order to protect our nation’s freedoms and values.

Today, President Trump issued several anti-immigrant Executive Orders: (1) temporarily banning Syrians entirely, banning refugees from various Middle Eastern countries, and forcing Muslim immigrants to register, (2) setting aside funding to build a wall on the Mexican but not the Canadian border, which will lead to more deaths on the Mexican border, and (3) punishing sanctuary cities which refuse to use their local police to enforce federal civil immigration laws. Let’s be clear: these are discrimination policies and some of them are unconstitutional. They each go against the grain of inclusive democracy, which is the form of democracy the U.S.A. is supposed to follow.

As my Jan. 13 report for Demos with Joanna Cuevas Ingram of LatinoJustice PRLDEF demonstrates, major parts of Trump’s Executive Orders may violate the Equal Protection and Due Process rights embedded in our Constitution. For those who speak Spanish, we issued it in Spanish as well.

We stand with immigrants, refugees, and Muslims as well as all people of color whose communities will be negatively impacted by these highly discriminatory Executive Orders. Here is my position as a civil rights lawyer and a member of a sanctuary community:

(1) Banning persons from entry into the United States based on their religion and even their national origin is very likely to be unconstitutional; and we will stand by the Muslim members of our communities and resist this discrimination;

(2) Building a wall that will not improve national security but instead lead to deaths of Central American, Haitian, and Mexican children, women and men, many of whom are fleeing extreme violence and have rights to asylum claims, is not only cruel and a waste of taxpayer money, it is also likely to violate international human rights law and relevant U.S. law;

(3) As we said in our Jan. 13 report on Sanctuary, Safety and Community: Tools for Welcoming and Protecting Immigrants Through Local Democracy, threats against sanctuary cities are overblown. First, state and local jurisdictions have some leeway to enact their own laws based on the values of inclusiveness democracy in their own communities. Even more importantly, various forms of local police, agencies, and schools being involved in federal civil immigration enforcement are unconstitutional. 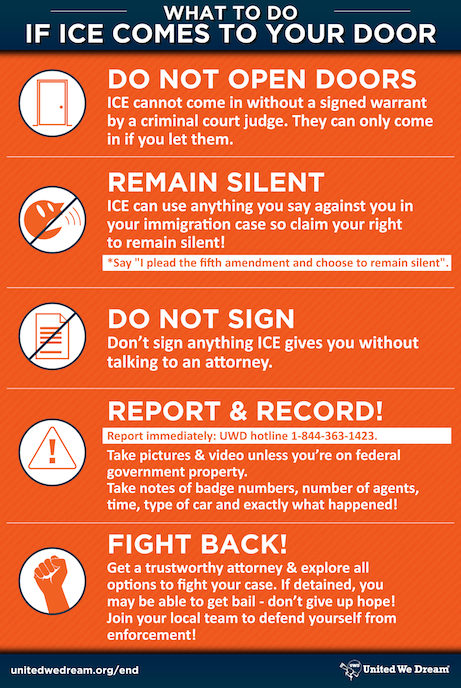 The candidate who ran on a platform of racism and xenophobia is following through on his threats, and his nominee for Attorney General, Senator Jefferson B. Session, support these policies, but the many millions who marched against this platform will continue to resist. Furthermore, there are plenty of ways to resist including knowing our fundamental constitutional rights, which as in any democracy, do not depend on race, religion, or national origin. United We Dream created Know Your Rights materials for people who are impacted and living in fear. This is not America and we will not sit back and let this new federal administration use lies, manipulation, and unconstitutionally discriminatory actions to ruin our country. We join with United We Dream in asking you to petition your city to become a sanctuary city. Also, if the federal government threatens you or your city’s sanctuary policies, please feel free to use the tools in our report to fight back.

Florida Gov. Ron DeSantis (R) has pushed changes that critics say made it harder to vote.
In the media
Lori Rozsa
Image

Felony disenfranchisement is one of several ways people get stripped of their power.
Blog