While this week’s inequality numbers have gotten a lot of attention, Paul Krugman points out an interesting corollary: not only are the top 10 percent taking home nearly half of the country's income, and the top 1 percent taking their largest share since 1928, but the top .01 percent have climbed to even more staggering highs.

Paul Krugman correctly notes that the dominance of this highest income group, the .01 percent, is the biggest story in Saez numbers. He cites the chart below to show their change during from 1979-2012, the period in which inequality really took off: 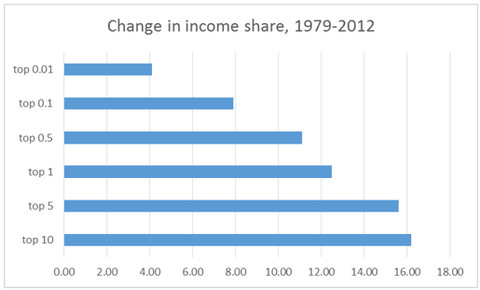 What he fails to mention is that the story is even more remarkable over the entire 20th century. After a steady rise from 1978 on, the top .01 percent of earners made nearly five percent of the national income in 2012. 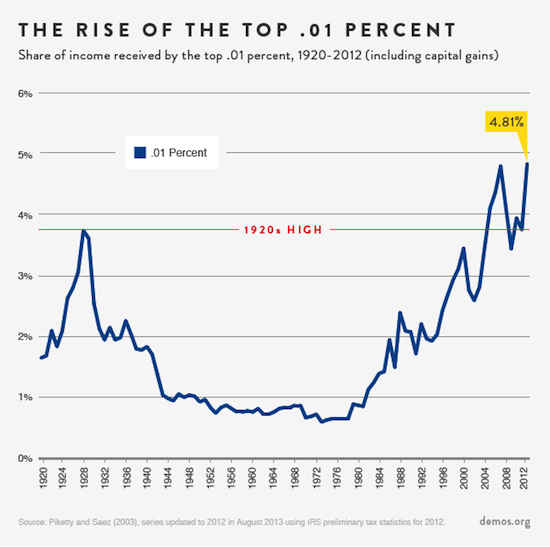 That’s just 16,000 Americans that make over ten million dollars a year. And their dominance is strengthening: the share of income controlled by that tiny group of people jumped over a percentage point from 3.7 percent in 2011 to 4.8 percent in 2012. This is the donor class, the same group of people that donate to political campaigns and determine the structure of the market they have so clearly mastered.

Not only is that five percent a historical high, it’s much higher than it was during the 1920s, when that same top .01% made a peak of two million dollars and 3.7 percent of the national income. They make 30 percent more today.

Krugman is right that you miss a lot of the story if you focus only on the top ten percent, or even the top one percent. That group of 16,000 Americans, the top .01 percent of income earners, is where the most power lies and who have seen the most remarkable rise. They make an increasing share of the national income and control an increasing amount of political power.