Racism Is Destroying the Right to Vote

Sean McElwee
Racism has affected voting in America since its founding, and it continues to affect voting today.
Voting Rights & Access

Across the country, many states are passing restrictions on the vote, particularly voter ID laws. In addition, conservative legislatures are looking to roll back affirmative voting reforms. Scholars have claimed that voter ID laws are, “highly partisan, strategic, and racialized affairs.” Other research suggested that voter ID laws tended to be passed in states with competitive elections, suggesting that electoral gain was the motivation. In addition, whites are slightly more likely to support a voter ID law when the proposal includes a picture of a Black person voting, rather than a white person.

Recently Keith Bentele and Ian Vandewalker examined the proposal of voting restrictions and they find that anti-Black stereotypes dramatically increase the chance of a proposal of a restrictive voting measure. States with very little anti-Black attitudes would have four restrictions proposed every two years (on average), compared with seven restrictions every two years for a very racist state. As I’ve noted before, the two also find a strong correlation between the number of African-Americans in the state and both the number of measures proposed and those actually enacted.

However, the two also find that anti-Black stereotyping doesn’t have a significant impact on the passage of such bills. This makes sense—passage depends on control of legislature and how important the legislators view restricting the vote. In noncompetitive states, they may not be concerned. However, over time, it is likely that racism will shape the electoral system. Using the index that Vandewalker and Bentele created and the anti-Black data from Elmendorf and Spencer, I tested this thesis (see footnote for data information). 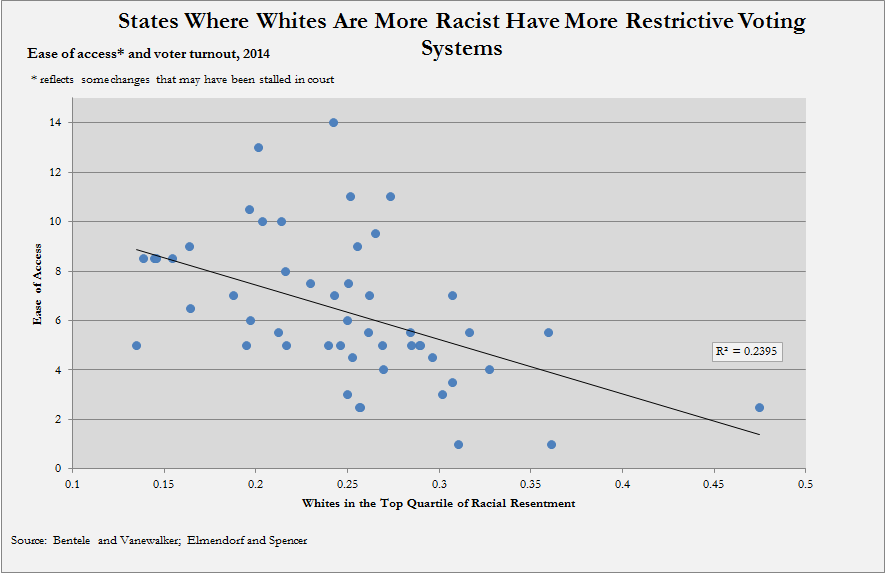 As the chart shows, the relationship between racial stereotyping and ease of access is strong. Although other variables certainly play a role, the R-squared value suggests about a quarter of a system’s ease of access can be explained by racial animus. This builds upon previous analysis. It suggests that while racial animus might not immediately predict the passage of a law, over time it can change the structure of a state’s voting system.

Since voter ID laws are the most racially charged voting reform, I wanted to see if anti-Black stereotypes might predict voter ID laws. As the chart below shows, racial resentment is higher in states with stringent photo-ID requirements. The difference in resentment between no-ID states and strict photo ID states is .078, a good amount larger than the standard deviation of the states, .064. 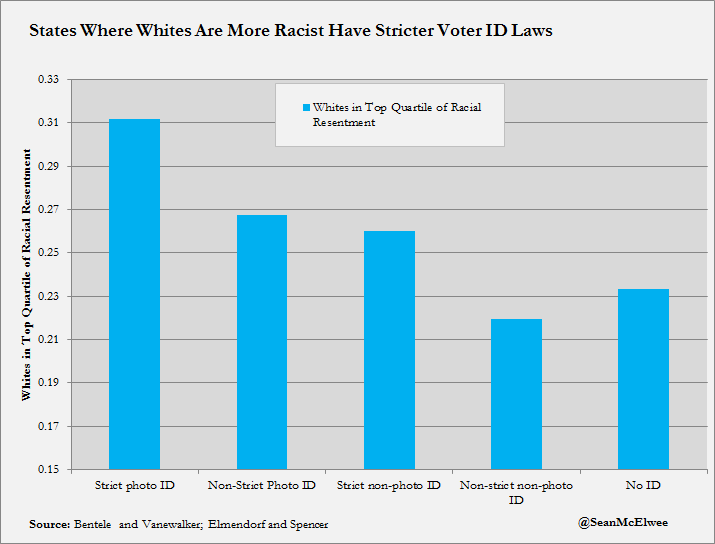 Racism has affected voting in America since its founding, and it continues to affect voting today. Between 2006 and 2012, racial animus predicted the introduction of a voting restriction, but did not predict the passage of a restriction. However, over a longer period of time, racial animus has the power to re-make a voting system. The result of decades of institutionalized racism and racialized laws to restrict the Black vote is likely the explanation for these results. In the wake of Jim Crow, states where whites express anti-Black prejudice have more restrictive voting systems and more stringent voter ID requirements.

To test whether racial animus may be motivating voter suppression I turned to two sources. First, I used the data that Ian Vandewalker and Keith Bentele compiled on ease of access. The metric includes whether a state has Same-Day Registration, Voter Id, Absentee Voting and other laws that could ease or complicate the voting process. It runs from 0 to 15, with 15 being the most accessible system. In their metric, Vandewalker and Bentele also developed a five point index ranging from 2 (no ID requirement) to 0 (strict photo-ID requirement). I used the data from 2014, which includes some laws that have not yet been implemented because of court hold-ups. The goal here is to see if racial resentment increases the passage of laws. Second, I used an index of racial resentment created by Christopher Elemendorf and Douglas Spencer using two massive surveys: the 2008 National Annenberg Election Survey (NAES) and the 2008 Cooperative Campaign Analysis Project (CCAP). Specifically I used the share of whites in a start with anti-black attitudes in the top quartile. In the voter ID chart, the y-axis is truncated because the index only runs from .135 (Alaska) to .474 (Mississippi).