New Research Findings: People Who Say Society Is Too Politically Correct Tend Not to Have Experienced Discrimination

Natalia Khosla
Sean McElwee
Differences of opinion are valid, but at some point the inclusivity of society should move beyond the realm of personal preference and experience.
Image
Democratic Reform

Is Donald Trump really speaking for a “silent” majority of Americans when he says that political correctness is a scourge on the nation? Or do most Americans deeply value tolerance and inclusivity? The answer to this question may well decide the election this fall, so we decided to crunch the numbers. The data suggests that like so much in our changing society, your perspective depends on where you sit. And one key source of this divide is perceptions of continued discrimination in our society.

To explore views about political correctness, we used the American National Election Studies (ANES) 2016 pilot survey, a 1,200 person survey performed in January of this year.1  ANES includes two questions that ask respondents if they think society needs to change the way it talks to be more sensitive to people from different backgrounds or if society has gone too far and people are too easily offended. There are two slightly differently worded questions on the same topic that are each asked to half of the respondents chosen at random.2  We combined the two questions and then examined people who said society needs to be “a lot” and “a little” more sensitive, and then separately those who said society is “a lot” and “a little” too easily offended. ANES also asks respondents how much discrimination they think there is against a number of groups on a scale of 1 to 5, with blacks being one of the groups. We combined responses of “a great deal” and “a lot” of discrimination, “a little” and “a moderate amount” of discrimination, and “no discrimination at all.” 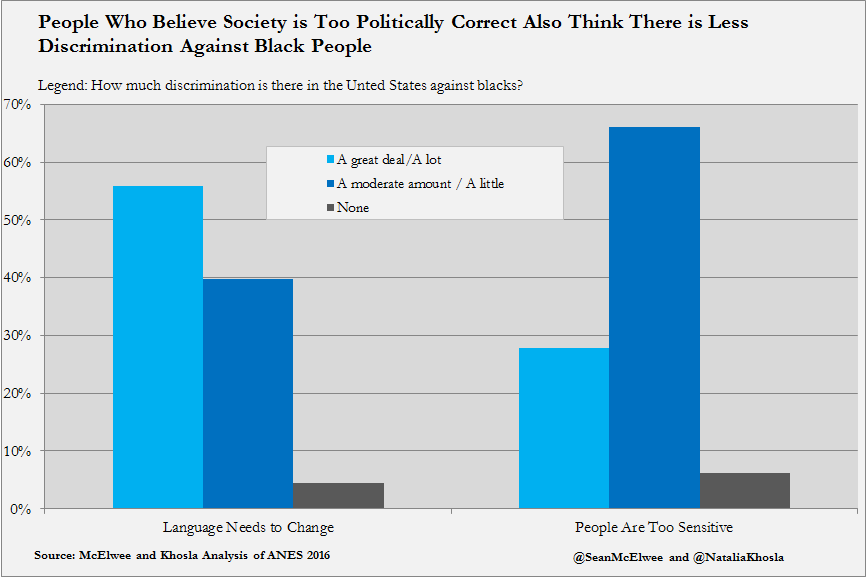 Twenty-eight percent of respondents (and 32 percent of white respondents) say that African-Americans face “a little” or “no” discrimination despite overwhelming evidence and personal accounts of blatant discrimination on a daily basis against groups based on their race, gender, sexuality, and other identities. One study finds that “John” will be offered $4,000 more than “Jennifer” for the same job.  Another finds that resumes with white-sounding names are more likely to be asked for an interview than identical resumes with black-sounding names. 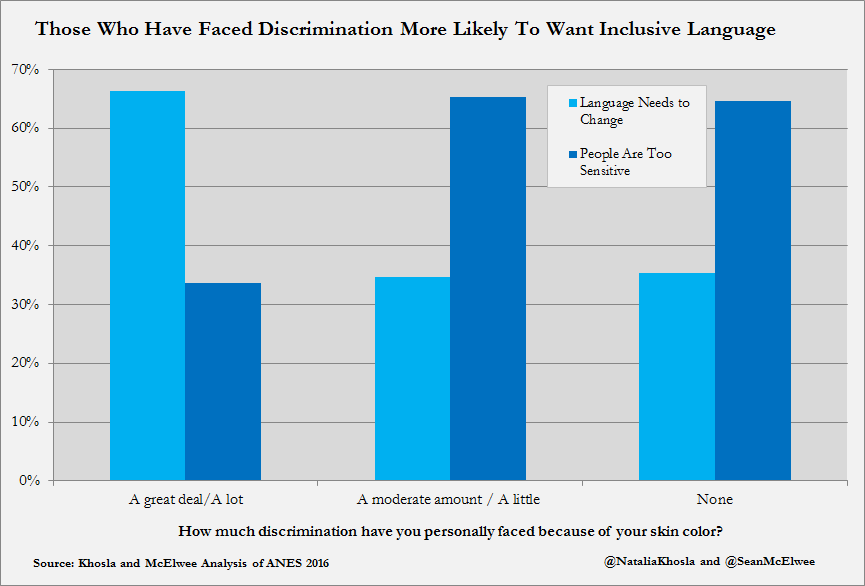 Somewhat unsurprisingly, there are strong racial divides on the question of political correctness, with whites more likely to say that “people are too easily offended:” 71% of whites, compared to only 34% of blacks and 42% of all people of color agree with this. We also find that those who faced discrimination based on their skin color are more likely to support changing language norms, and this holds true even among only people of color (which ensures the result doesn’t merely reflect racial differences in views on political correctness).

Optimistically though, these data indicate that the reverse is also true: those who recognize that there is a great deal of discrimination against blacks are more likely to believe society needs to become more sensitive. The chart below shows that whites who say that blacks face “a great deal” or “a lot” of discrimination are more likely to say language needs to change.

Also optimistically, whites who recognize that there is a great deal of discrimination against blacks are much more likely to believe that society needs to become more inclusive than whites who deny racial bias.

The data are clear: those who acknowledge that discrimination exists and have experienced it themselves think society needs to become more sensitive to people from different backgrounds. Those who haven’t, don’t. The majority of people who believe society is overly politically correct, then, are likely speaking from their own lived experience: they may not have experienced discrimination or may not think it occurs much, so when people take offense, they believe society is simply being too sensitive.

These differences of opinion are certainly important, but at some point the question of how inclusive the dominant society must be to the concerns of different people will have to move beyond the realm of personal preference. The racial and gender anxiety shuddering through this election shows that this time may have come. The United States is becoming a truly pluralistic nation, with residents and citizens who have roots in every community on the globe, and more individuals are demanding to express their gender and sexuality as they feel it. That diversity can be our greatest asset as a nation, but only if we forge a common understanding of the discrimination that exists, and a language that works for all of us.

We must not underestimate the progress and yet-untapped potential of this executive order.
Blog
Laura Williamson