Jeb Bush Dropped Out, But Money Still Matters in Politics

After entering as the presumptive front-runner, Jeb Bush dropped out of the presidential race on Saturday. He spent huge sums of money in early states but failed to get votes. Unsurprisingly, many pundits are declaring that this proves money doesn’t matter in politics. But there is a large political science literature to suggest otherwise: money influences political outcomes and tilts policy in favor of an overwhelmingly white and male donor class. In addition, without money, qualified candidates can’t get into the game.

How Money Influences Who Wins, And Who Sits At The Table

The trope that money doesn’t matter because some well-funded candidates don’t win elections is trotted out frequently. This is akin to “citing weather reports to disprove climate change.”  While it’s not true that the candidate who raises the most money always wins, that candidate does win in the overwhelming majority of races. Election law expert Rick Hasen compares it to buying lottery tickets: “Money doesn’t win elections, but it gives you a much better chance of being elected. Newt Gingrich didn’t succeed, but he got chance after chance because someone with money wanted him to. It’s like buying multiple lottery tickets.” Saying that money doesn’t matter in politics because Jeb didn’t win the nomination is like saying because all the advertising in the world can’t make prune juice the best-selling drink in the United States, it’s worthless for Pepsi to buy Super Bowl spots.

Candidates know this, and they spend their time courting big donors, which determines both whose concerns they address and who sits at the table afterward and on legislative priorities. As Senator Chris Murphy notes when he was doing fundraisers, “I talked a lot more about carried interest inside of that call room than I did in the supermarket.” The deepest problem is inequality of voice: low-income people, women and people of color make up a vanishingly small portion of donations. The problem is magnified in the big donor era, in which donors have even more influence over campaigns. In his book, Big Money, Ken Vogel describes the way donors are coddled,

Today, the biggest donors give way more, and the perks they get are way better…. People who give the federal maximum to a candidate-$5,200 in 2014-are solidly middle tier, but they get actual face time with candidates or at least advisors. And today’s biggest donors, those who give millions through new channels, get real say in advertising campaigns and strategy.

Billionaire Carl Icahn took another tact; he’s simply created his own super PAC to lobby for corporate tax reform. The result, Adam Lioz argues, is that policymakers are overwhelmingly responsive to the interests of rich white men. As the chart below shows, using data from political scientist Michael Barber, donors are far wealthier than average Americans. 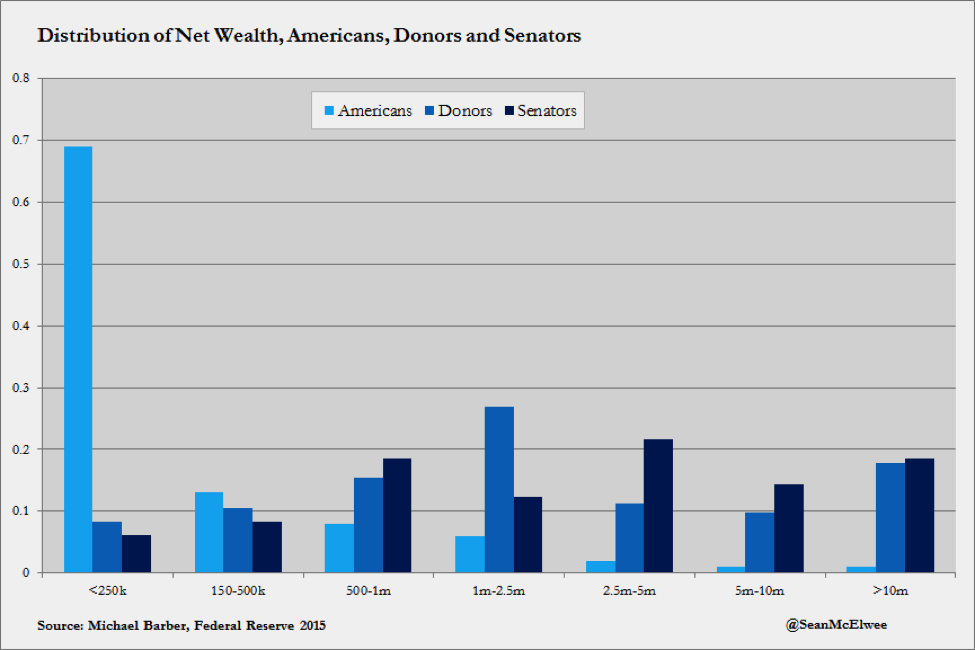 The rise of big money in politics has forced parties to more actively cultivate big donors, which has shifted both parties towards a less economically progressive agenda. As I’ve shown, data from CCES show that big money donors are more economically conservative than non-donors.

In their book, The Unheavenly Chorus, Kay Lehman Schlozman, Sidney Verba and Henry Brady find that donors who give money are more conservative on economic issues, and the biggest donors are more economically conservative. Further, as labor unions have been displaced by corporations as the main funders of the Democratic party, the party has shifted right. Within the Republican party, voters support reducing the deficit by raising taxes on those earning $250,000 or more, but donors overwhelmingly oppose it. As I’ve noted, big donors overwhelmingly oppose action on climate change and have successfully poured resources into preventing action. 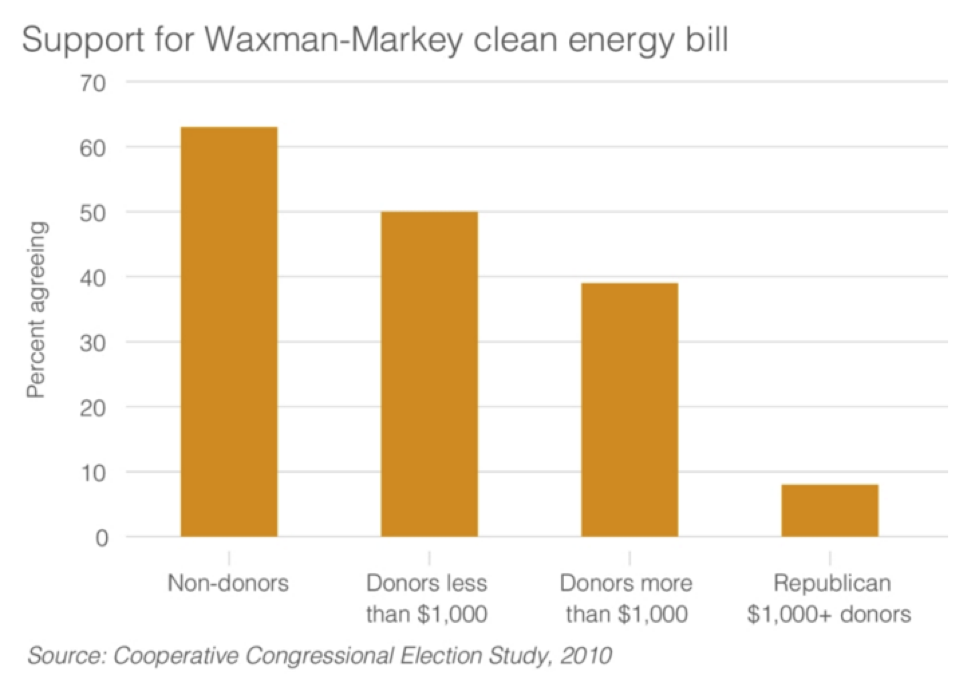 Extensive research shows that the power of big money influences outcomes. Research suggests that generosity of Temporary Assistance to Needy Families (TANF) benefits and time limits on their use are significantly related to the mobilization of business groups in the state. Another study finds states with stricter campaign finance laws devote more money to public welfare, particularly to cash assistance (he controls for the party control of government). As the share of state campaign financing that comes from corporations increases, policy in the state becomes more favorable to business. Other research finds that campaign contributions affect the distribution of government contracts and the extent of bureaucratic monitoring and intervention.

The Solution Is Public Financing

But donors-only democracy is not the only path America can take. By embracing automatic voter registration and public financing, we could increase the power of average Americans. As I’ve shown, higher voter turnout would lead to more responsive policy—donors, after all, only have one vote.

The second solution is to increase the power of small donors with a public matching or voucher program. These policies would bring much-needed diversity to the voter and donor pool. In addition, they could help boost diversity in candidates.

Common Cause finds that, “Diversity among candidates, especially ethnic minorities, has more than doubled in Arizona, while in Maine the number of women candidates and legislators has increased by 18%. The number of women elected to Arizona offices covered by public financing jumped from 25 in 2002 to 34 in 2006, and the number of racial minority candidates running for Arizona offices covered by public financing went from 13 in 2000 to 37 in 2006.” In his book, Subsidizing Democracy, Michael G. Miller finds a nearly 12 percentage point increase in the share of time publicly financed candidates spend interacting with voters.

Money in politics still matters—and those who want to use Bush’s failure as evidence that the power of the donor class doesn’t hurt democracy are peddling destructive myths.