Let us finally dispel the notion that increased numbers of African American voters, and more broadly all voters of color, headed to the polls in 2008 and 2012 solely because of Barack Obama. The majority of the press reporting (see here, here, and here) on the release of the Census bureau’s report, “The Diversifying Electorate -- Voting Rates by Race and Hispanic Origin in 2012 (and Other Recent Elections),” has been both that African American voter turnout was higher than non-Hispanic White turnout for the first time in history, and that Latinos and Asian American voters continue to turnout at lower rates than their percentage in the population. While these takeaways are true from the report, they neglect both the long term upward trend, and the important structural and community based influences on voter turnout among people of color.

The graph below illustrates that African American voter turnout in relation to White turnout is higher among younger age groups. It clearly shows that while Black voters ages 45 years and older reached turnout parity with Whites in 2008, those 18 to 45 years old did so in the 1996 and 2000 election cycles. This is especially noteworthy given that African Americans are still disproportionately worse off in the two most commonly argued predictors of voter turnout: education and income.

Voter Turnout Among People of Color All Ages ’96-‘12 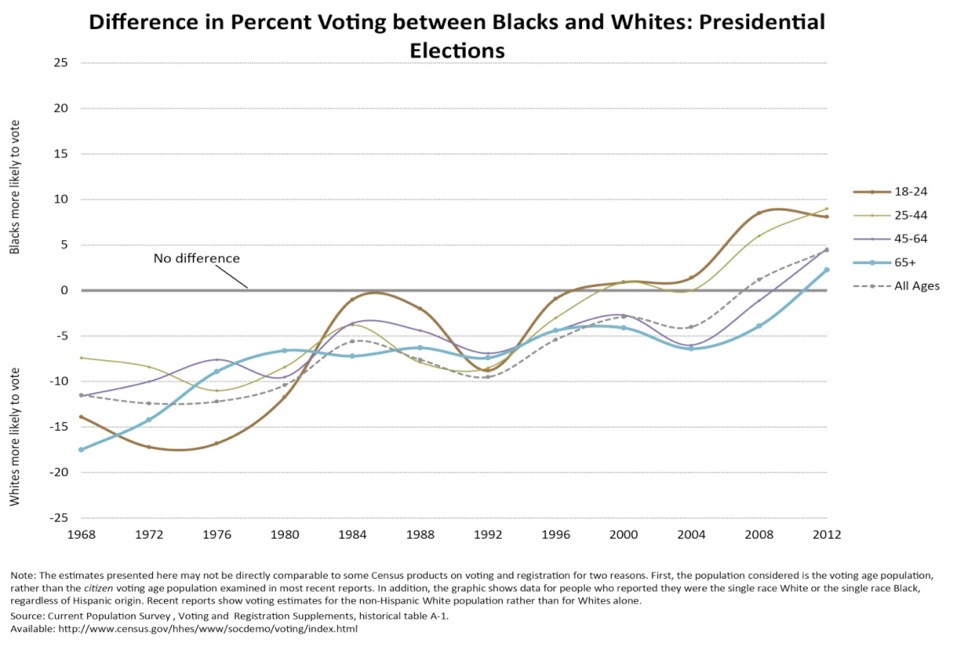 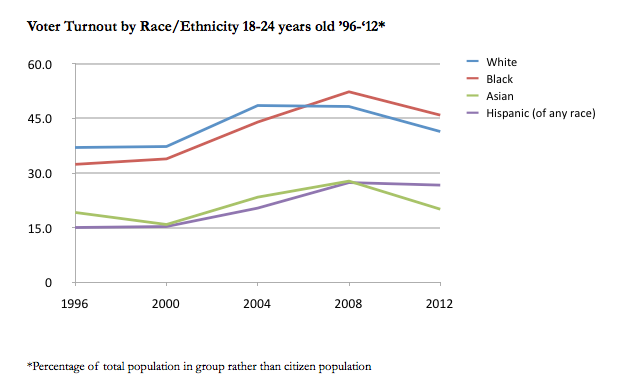 The increase in African American turnout, rather than simple byproducts of the changing demographics of the electorate or Obama’s popularity among Black voters, should be attributed to election reform legislation and enforcement over the last twenty years and aggressive targeted outreach by organizations in communities of color. Federal election reforms like the National Voter Registration Act of 1993(NVRA) or so-called "Motor Voter" law and the Help America Vote Act of 2002 (HAVA) as well as similar efforts at the state level reforms like same day registration and early voting, expanded and eased voter registration. These also encouraged and supported voter mobilization and outreach among community groups and religious organizations, which targeted young people and people of color in their communities (Rock The Vote, Vote or Die! Souls to the Polls, Voto Latino, APIA Vote, and Native Vote, etc.). Additionally, organizations like Demos have worked to enforce established election reform provisions and push for more ways to give everyone an equal voice in our democracy.

It must be mentioned that the more accurate statistic to derive turnout is the voting eligible population (VEP) turnout rate, which excludes ineligible voters like people on probation, felons, and non-citizens, rather than the voting age population (VAP) turnout number used by the CPS report. Regardless of which number is used, there is a general upward trend in turnout rates for voters of color particularly among younger voters. Because there is much more work to do to increase voter turnout rates, especially in Latino and Asian American communities, it is essential that we recognize the systemic and institutional tools which have worked rather than rest the cause purely on one individual.