Robert Hiltonsmith
Embedded gender and racial discrimination and lack of bargaining power are major causes of not only low pay for home health care aides but for many of the country’s low-wage, fast-growing occupations.
Image
Good Jobs and Worker Power 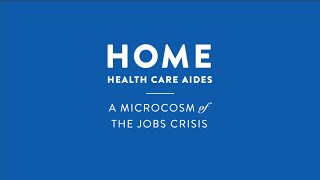 Last September, the Department of Labor announced they were extending minimum wage and overtime protections to the nation’s nearly 2 million home care workers, who were previously excluded from these and other protections of the Fair Labor Standards Act (FLSA). The rule, which goes into effect Jan. 1, 2015, not only corrects an unconscionable omission, but provides vital protections to an occupation that’s both the fastest-growing in the country and pays some of the lowest wages. In fact, most of the occupations projected to grow the most over the next decade—retail salespersons, food preparation and service workers, customer service representatives, janitors—pay low wages, exposing a deeper structural problem with our labor market and the policies affecting it. Why will most of the employment growth come in low wage occupations, and what can we do about it? Looking deeper into the data on home health care aides provides a number of clues.

Why, then, does the fastest-growing occupation in the country earn so little? Typically, a rapid increase in the demand for an occupation would tend to drive up average wages as employers compete for employees. In this case, several factors combine to counteract this trend, factors which in fact shed light on why wages remain low in many of the fastest-growing occupations. Perhaps the largest reason for aides’ low wages is because care work, which makes up the majority of home health care aides’ duties, has been traditionally undervalued in our society.

The reasons why are complex, but the primary one is simple: because care work is traditionally performed by women. And home health care aides are no exception: more than 90 percent are women.

Another major factor is race: nearly 60 percent are people—i.e. mostly women—of color, led by African Americans, who work nearly a third of all home health care aide jobs. Race is in fact the reason why the Obama administration needed to issue a rule to extend FLSA coverage to aides and other domestic workers: to pass the FLSA and other landmark New Deal legislation, President Roosevelt had to agree to exempt domestic workers and farmworkers from many of the laws to secure the votes of southern Democrats. They, in turn, wanted the exclusion because most African Americans worked for inhumanely-low wages on the land or in the houses of white southerners in the depression-era South, and thus southern congressmen wanted to ensure that these new labor laws didn’t disrupt the southern economy, which profited enormously from this exploitation.

Another piece of the low-wage puzzle is the workers’ lack of negotiating power or ability to demand higher wages or better job conditions. Unions have had limited success organizing home health care aides, a task made especially difficult both employers’ opposition, language barriers (many Latino aides are immigrants), and the recent Harris v. Quinn Supreme Court decision which limited the ability of unions to collect dues from home care aides, further hindering organizing efforts. However, one common argument why aides are paid low wages—that it’s a low-skilled position, requiring little training—weakens when we look at the data. Forty-five percent of home care aides have some college training, and 16 percent have an associate’s degree or higher, significantly larger shares than the 33 percent and 11 percent, respectively, who had such training/credentials a decade ago.

These factors—embedded gender and racial discrimination and lack of bargaining power—are major causes of not only low pay for home health care aides but for many of the country’s low-wage, fast-growing occupations.

If we want to ensure that the country’s future jobs are good jobs, we need broad policy solutions that address these deep causes. Demos wrote about one such solution in our recent report, Underwriting Good Jobs, which examines the share of the private sector supported by federal purchasing, focusing on federal contracting and Medicare which, together with Medicaid, accounts for nearly two-thirds of the spending on home health care. We need a policy solution at least a broad as the one we propose in the report, which would give preference companies that do business with the federal government who pay good wages and offer decent benefits, to change the deep causes at the heart of home care aides and other such workers’ low wages.