Democrats have unveiled their new Better Deal plan for the 2018 elections, a pivot toward a populist, positive agenda. Though some have advocated triangulating to win over mushy moderates, a progressive agenda actually has potential to broaden the Democratic coalition. Demos polling suggests that a minimum wage increase is extremely popular, and policies like the minimum wage could help Democrats win a broad coalition in 2018. A higher minimum wage was ranked as a top priority for working-class black and Latino voters, as well as white working-class Obama-to-Trump voters. The chart below, based on Demos polling, shows the percentage of voters identifying each issue as one of their top 3 priorities. 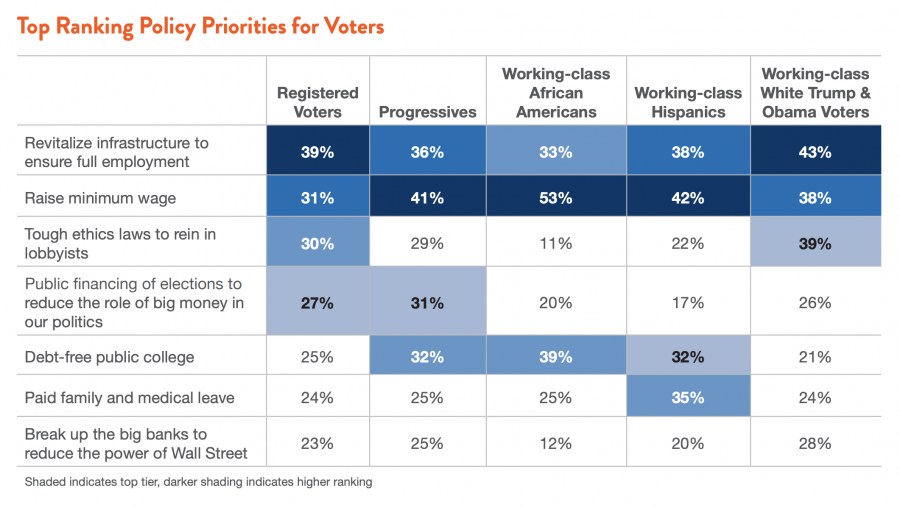 It has been 8 years since there was a minimum wage increase, and in the meantime, wage growth has remained slow. Research suggests that minimum wage hikes help explain why wages grow more under Democrats than Republicans. Even those in the middle of the income distribution would benefit from a higher minimum wage. Importantly for progressives, a higher minimum wage is quite popular, as I’ve noted before. As Democrats debate whether to embrace Romney-Clinton voters or woo Obama-Trump voters, a minimum wage hike is favored by all the voters that Democrats need to win over in 2018. It also offers the potential to mobilize the Obama voters Democrats lost in 2016, either because they voted for a third party or did not vote at all.

Using the Cooperative Congressional Election Studies (CCES) 2016 survey, I can examine support for a higher minimum wage among different potential Democratic voters in 2018. CCES asks about a $12 minimum wage (see here for question wording), though Democrats have (correctly) embraced a higher $15 minimum wage. As the chart below shows, a higher minimum wage is popular with Obama-Trump and Romney-Clinton voters as well as Obama-third party voters and Obama-nonvoters. This is significant because higher turnout would have been enough to deliver victory in key states to Clinton. 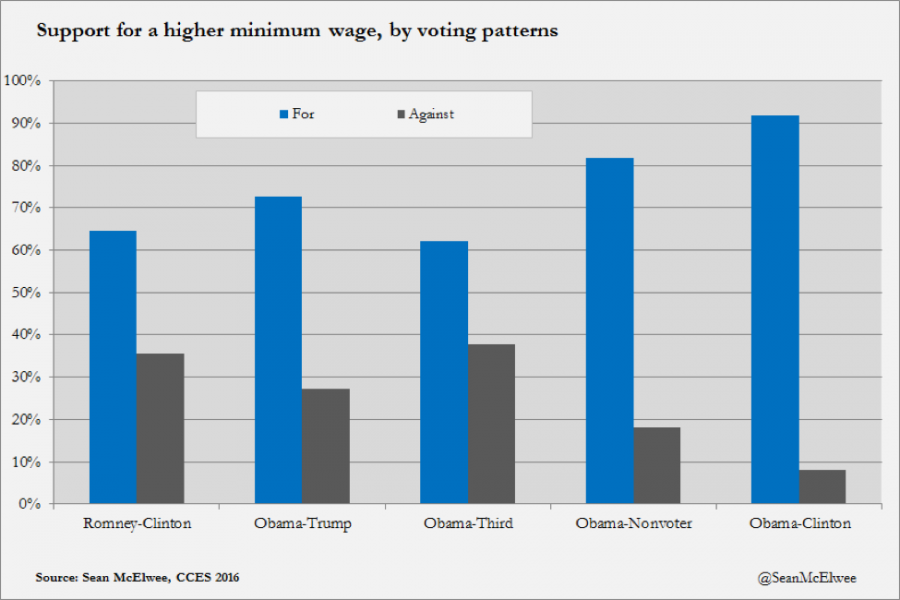 Democrats must embrace an agenda aimed at expanding the turnout of the party’s core voters, including mobilizing those who stayed home in 2016 (and who share a closer ideological position to the Democratic Party compared to other voting blocs). Critically, to be effective, such a strategy needs to tackle voter suppression and other barriers to voting. At the same time, there is probably potential to keep some Romney-Clinton voters and win back some Obama-Trump voters. However, slightly more than two-thirds of Obama-Trump voters voted for Republicans down-ballot, so it’s not clear how many could be won back. Across the board, though, with its widespread and strong support, a higher minimum wage could be a unifying plank for a strategy to attract core voters and others.