This week, New York became the first state in the country to return to a guarantee of tuition-free college for students at state public colleges and universities. The move is being touted as a historic moment and a step toward making college affordable again. It's good to see states try to meet this challenge in the absence of leadership in Congress and the White House.

Proponents of New York’s proposal (and tuition-free community college programs in Tennessee and Oregon) rightly point to the power of “free” to jolt students and families in ways that other programs have thus far been unable to do. And there’s something to that. Since the rollout of the Tennessee Promise, the state’s free community college program, the state has seen pretty substantial enrollment and retention effects at the state’s community and technical colleges. In Kalamazoo, the site of the original free college “Promise Program," researchers found benefits on high school student behavior and academic performance among African-American students. Other research in Pittsburgh found positive impacts on college enrollment and student persistence from freshman to sophomore year. Clearly, there are merits to these programs that make them worth pursuing. Creating a culture of universal college-going is no small feat, and the State of New York now has a big, shiny competitive advantage that it can tout.

That said, as we celebrate the Cuomo Administration’s commitment to New York’s students and families, New York's plan isn't without its warts. Naming them can get us toward a Unified Theory of Free College, and provide a model when the federal policy window on college affordability opens once again. Here are a few thoughts for what might make for a powerful, progressive, free college proposal.

If Possible, Make It a First-Dollar Program

As a “last-dollar program,” New York’s plan is structured similarly to Promise Programs around the country, in that it exhausts financial aid from the federal government and other resources before any new state resources kick in. In other words, a student who receives a Pell Grant will receive fewer state resources under the new program, and the new program when combined with federal grant aid ensures that middle-class families receive the exact same subsidy as working-class families.

The reason for this is obvious: program cost. But since non-tuition costs make up far more of the cost of attending college at public institutions, it still leaves families with a need to save mightily, work more hours, or take on debt in order to attend. Very few of the students who still graduate debt-free have received Pell, or any other means-tested benefit for that matter: 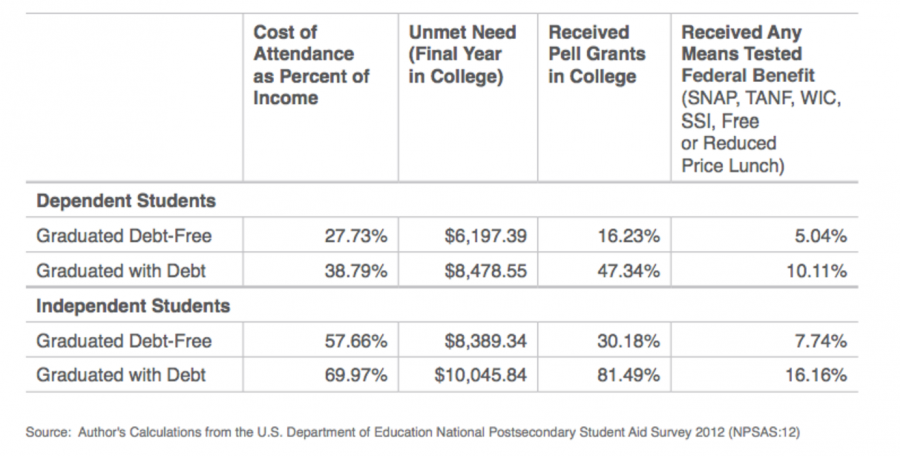 There are political debates to be had around whether a less monetarily generous program that also includes wealthier families is more durable. I’m sympathetic to them. But a way to marry both could be to provide “first-dollar” support for students who receive Pell Grants – ensuring that tuition is taken off the table and Pell Grants can be used for living expenses entirely – while maintaining the last-dollar structure for wealthier students.

Perhaps the most controversial piece of New York’s plan is that it requires students to stay in the state for the same length of time they received the award, or their grant can convert to a student loan. And while this may not impact very many students, it’s an odd – and difficult to enforce – provision that elicits more questions than answers: What type of loan would it revert to and who would administer the loan? What happens if the New York labor market faces specific challenges? What happens to students who live in a neighboring state and work in New York, or vice versa?

The desire to create incentives for workers to remain in-state is laudable. Doing it through opaque student loan penalties is less so. A better approach would be state-specific loan forgiveness for students who stay in-state and enter high-value, low-wage fields. This has the advantage of not being punitive, and can be tweaked over time as state economies shift. It can work in concert with federal Public Service Loan Forgiveness by providing incremental forgiveness every few years, or through some other mechanism, and it beats the bait-and-switch of a grant that turns into a loan if you move.

It may be a worthy use of state dollars to lower the price of private college for low-income students, but it should be incumbent upon those colleges to actually enroll and graduate low-income students in the first place. Some colleges do a good job of that; others don't. A centerpiece of Hillary Clinton’s higher education agenda revolved around a fund for private colleges and universities – particularly Minority Serving Institutions – to lower the price for students and add additional academic and social supports. But critically, this money would only be available for colleges that enroll high numbers of low-income students or students of color.

New data from Raj Chetty and his colleagues indicate which colleges enroll high numbers of working class students and provide actual ladders of upward mobility. These two points – access and mobility – are crucial in determining which colleges (privates in particular) should receive new grant dollars. In New York, the CUNY and SUNY systems score extraordinarily high. Private colleges should try to meet this benchmark as well.

Remember that Public Higher Education is a Public Investment

Too often, we think of programs like Free College from the spending side of the ledger. And it’s true that states will have to cobble together sizeable funding to make an upfront guarantee to students. But the research is clear on the public payoff to large investments in higher education at both the federal and state level. One study estimated the annual fiscal rate of return for a college degree is 3.1% for states, finding that the “time required to recoup the public investment in college students is remarkably short.” It’s currently en vogue to excuse massive student debt burdens by talking about college as an individual investment. But let’s not forget that the general public receives a sizeable return on investing in student attainment, and thus major investments are likely to pay off over time. After all, the very notion of the public good guided the creation of the (free) CUNY system in the first place.

So while we wait for results of New York’s program to come in, here are some starter lessons for the other laboratories of democracy: Go big, don’t overcomplicate things, maintain a universal promise of “free” while investing greater resources in working class students, and focus leftover resources on the colleges where those students are.

This presentation outlines the ways that student debt both contributes to, and is a cause of, America’s historic and persistent racial wealth divide.
Testimony and Public Comment
Mark Huelsman
Image

Bloomberg has quietly begun to roll out a series of policy proposals, and this week, it was higher education’s turn. His plan says a lot about where consensus currently is—and is not.
Blog
Mark Huelsman