Congress Didn't Pay a Lot to Go to College. Today's Students Shouldn't Either.

Mark Huelsman
When the Senate went to college, they paid an average of just over $11,443. If they attended the exact same institutions today, they’d pay an average of $32,279.
Debt-Free College

One of the oldest attack lines in politics is that a candidate or elected official is “out of touch” with the American people. The phrase, deployed often and by both parties, is often used to outline how a statement, voting record, or ideology is on the minority side of public opinion. In other cases, it’s used to target legislators who have served several terms, inferring that their tenure in office has left them too cozy and unresponsive to the needs of constituents. In the case of both Mitt Romney and John Kerry, it was used to infer that the very life experiences of a candidate left them out of touch with those of the “everyday American.” It’s designed to remove any and all appearances of empathy from the equation.

In some cases, it’s actually true. Look no further than the cost of higher education. This week, the Senate was expected to (but looks like it no longer will) vote on a bill to allow students to refinance their student loans. I’ve written before on why this makes sense, and we’re even releasing a video today on the topic. But beyond the merits of refinancing, it’s striking how little the system that the Senate is debating resembles the system they encountered when they were college-age.

It’s no secret that college costs have increased dramatically for some time. It’s also no secret that student debt has quadrupled in the past decade alone.

This got us thinking – how different is the system today than the one that Members of Congress enjoyed? How much more affordable was college for them than it is for today’s students. As a thought experiment, we looked at the members of the House and Senate committees that oversee higher education and asked two simple questions: What did it cost for them to go to college, and what does it cost a student to go to the same school today?

What we found was striking, but consistent with what this generation of students and parents has been feeling, and what the next generation of college-goers are feeling right now.

Put simply, when the Senate went to college, they paid an average of just over $11,443.1 If they attended the exact same institutions today, they’d pay an average of $32,279. 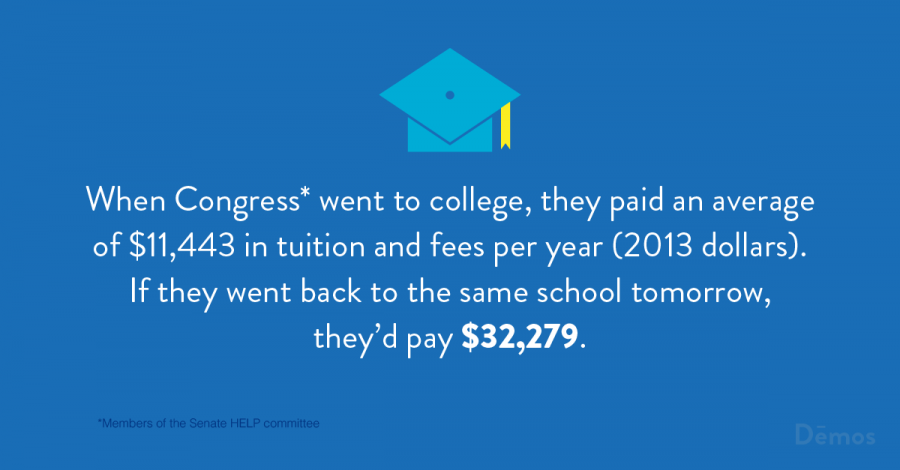 The story is similar for the House. When the House2 went to college, they paid $8,628 in tuition and fees (again, in today’s dollars).

Taken together, if each of the 63 Congressmen and women overseeing higher education went back to school today, they would pay over $1 million more in college costs, even after adjusting for inflation. 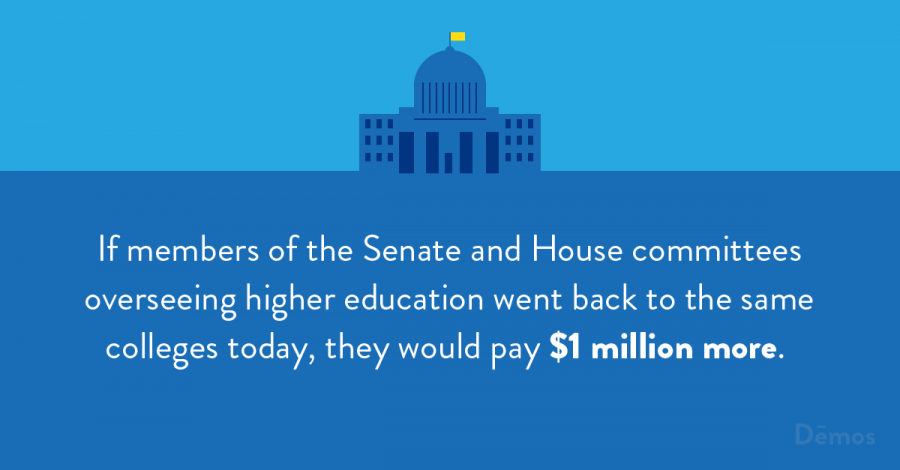 Now, obviously, the path to elected office often runs through private colleges and universities, which tend to be more expensive than public 4-year institutions. Naturally, most students at public schools aren’t paying $32,000 in tuition and fees. But the gap is shrinking, as the cost of public 4-years has increased at a faster pace than the cost of private institutions. Adjusted for inflation, public schools are almost 2.5 times more expensive than they were 30 years ago. Unadjusted, what was once a $1,300 tab to attend Miami University in Ohio in 1980 is a $13,000 bill today – an additional zero on the end of a tuition bill.

Now, this certainly does not mean that Congress is incapable of coming up with reasonable, forward-thinking solutions to get college costs, and student borrowing, under control. But it should give the officials in charge of crafting tomorrow’s system of higher education finance a sense of just how much has changed since they entered the campus gates. Essentially, when Congress went to college, student loans were the exception to the rule. Today, they're the rule.

One enormous piece that has changed, of course, is the responsibility of states in making higher education a public good. Costs have gone up everywhere, but state governments in particular have been cutting higher education budgets and forcing students to take on a far higher percentage of costs than ever before. The natural outcome, of course, has been the federal government attempting to deal with the consequences, by offering federal student loans and limited amounts of grant aid. In that vein, we’re also releasing a policy paper today that outlines what the federal government can do to ensure that states recommit to investing in higher education, just as they did for generations of previous students – some of whom are even serving in Congress today.

You can read our brief here.