College is Worth it, But… (Or, Most Students Aren’t Economists)

David Leonhardt’s post on whether “College Is Worth It” on The Upshot this week was the most widely emailed story at the New York Times earlier today—a sign that the public is very antsy about the costs and benefits of higher education. Leonhardt’s conclusion, based on new research from the Economic Policy Institute, is that indeed college is worth it—that the wage gap between those with and without degrees is climbing, and that a student is likely to more than recoup what he or she pays in tuition and fees many times over.

All of this is absolutely true; a four-year college degree is absolutely worth it relative to a high school diploma—in wages, employment prospects, democratic participation, and even health. This may be because circumstances for those without a college credential are simply getting worse, or it may be that college simply is essential in building human capital. Regardless, this article – and indeed, this whole debate – makes a few assumptions that mask several fundamental inequities in our system of higher education, and necessitate several questions about our priorities as a country.

The first assumption is that “college” is synonymous with "graduating." In fact, fewer than 6 in 10 students who start college complete a degree within six years. Fewer than 4 in 10 students complete a four-year degree within four years. Around a third of students who take on debt to finance a degree drop out without ever receiving a credential – stuck with the tab without many of the benefits that an education would bring them.

And of course, these are just overall numbers. Many institutions offer students far lower chances of actually receiving the degree that is, overall, “worth it.” For example, students at for-profit institutions are much less likely to receive a degree than those at public or private 4-year schools, even though nearly all students at for-profits are forced to borrow to attend. Indeed, over half of all students who borrow at four-year for-profit schools drop out with no credential.

For those who are lucky enough to earn a degree, it’s no secret that taking on student debt is almost necessary for getting there, and that average debt has risen to nearly $30,000 per graduate. It's worth noting that it wasn't always this way. Until the mid-1990s, fewer than half of all bachelor’s degree recipients had borrowed to finance their education. Now, nearly 70 percent of bachelor’s recipients take out loans to finance degrees. 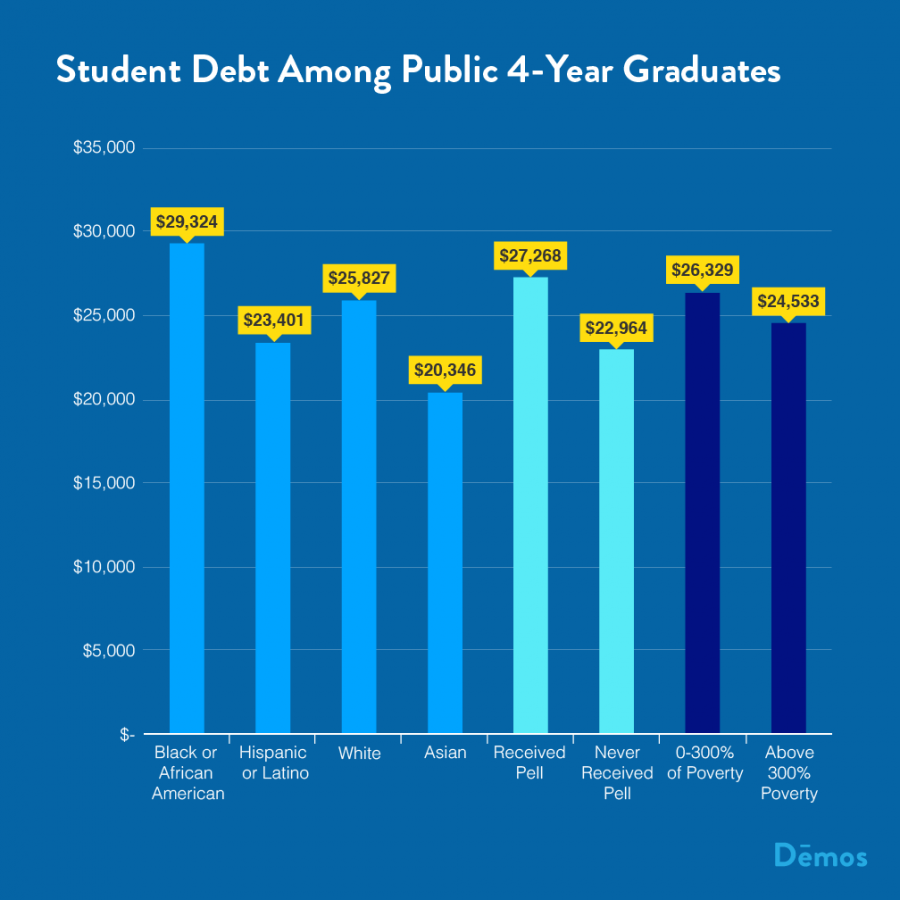 The second implicit assumption in this debate is that for students, the cost of going to college is pretty much equalized. On the contrary, student debt—which does not include the out-of-pocket money that students and families invest in lieu of borrowing—is distributed in highly inequitable ways. That low-income students are far more likely to borrow, even after receiving Pell Grants, and even at public schools, shows how regressive the system has actually become. This is genuinely the result of our systematic refusal to invest in a generation of students whom we have told that a college degree is a necessary pathway into the middle class.

Our research at Demos has shown that states are forking over less and less money per student in higher education, again as we are telling students that a college degree is worth it. This, of course, means higher tuition and greater levels of debt. But it also means that students may attend part-time in order to work, making them far less likely to graduate.

This brings us to the third assumption: that the assumed benefit over time should be enough to assuage families into taking on debt. What it really means is that that genuinely risk-averse students may not attend at all, fearful that they may be one of the unlucky students whose degree won’t pay off in the long run. Most people aren’t economists, after all; asking someone to take on tens of thousands in debt for an ambiguous payoff may be enough of an emotional leap that he or she will forgo the experience altogether. There is very real evidence that this conundrum occurs every year in low-income, minority, and otherwise underserved households.

Even worse, it also means that as our public institutions receive fewer resources, the students who do go are less likely to receive the student services or supports that would otherwise shepherd them toward a degree. This is particularly true at community colleges, which have been decimated funding-wise, and where students often need the most support. If we continue to neglect these fundamental institutions—where around 40% of all students go—we run the risk of creating permanent inequality within our higher education system.

Leonhardt rightly makes the point that the media should not be scaring students away from going to college, because the alternative of not going is worse. Unfortunately, our move to a debt-for-diploma system is doing a good enough job of that itself.