Are people better off than they were before the recession? By most headline figures they’re not: Poverty and inequality have risen to record levels, median incomes declined. Unemployment has improved, marginally, but 37 states have yet to regain their pre-recession job levels.

Conservatives like to push back on claims of rising inequality or worsening poverty by pointing out that their measure of poverty or inequality insufficiently captures the increasing well-being of even the poor. They're better off, they say, because low and middle-income Americans are living better than they did in the past. These arguments manifest themselves in concern over “Obamaphones” or access to liquor or drugs, and generally recommend policy solutions as odious as drug-testing for welfare, or stricter control over food stamps. Even taking these conservative policy solutions on their face, fraud complaints are spurious. We want poor people to have more money. Programs like food stamps and Medicaid undoubtedly accomplish that.

But let’s dive deeper into whether families are better off. The Census Bureau periodically publishes more comprehensive assessments of well-being. Their most recent iteration, released yesterday, measures well-being comprehensively based on various conditions such as homeownership (or rentership) and housing condition, access to appliances and electronic goods, neighborhood conditions, meeting basic needs to avoid eviction and eat, and ability to get help from families or the community should they need it. Most of the trends in the results aren’t shocking, with extreme differences in situation based on age, sex and race.

Their headline results are sobering, however. How households fared from 2005 to 2011, according to the Census Bureau’s more comprehensive assessment:

The percentage of Americans suffering several specific hardships has increased since 2005 as well: 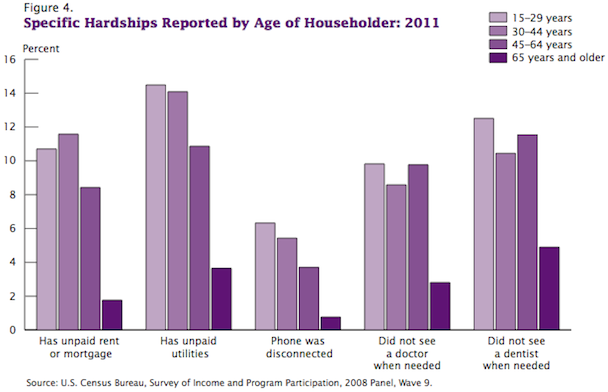 So, even conceding that headline stats don’t tell the whole story, conservative arguments fail on their merits.

No, there isn’t an increasing access to basic appliances that would signal a middle-class lifestyle. No, low-income families aren’t better able to meet basic needs like paying rent or purchasing food. Families are worse off because they're poorer. Making some goods (like phones) marginally less expensive in the face of collapsing incomes and household wealth hasn’t truly improved the plight of low-income workers. Families have clearly struggled to meet what the Census rightly considers basic standards of living. Trying to restrict or reduce proven government programs despite these conditions isn’t then a conservative acknowledgement of nuance, it’s the rejection of reality.