The NCAA Men’s Basketball Tournament is a massive revenue-generating event, with implications beyond the $10 many of us wasted by entering our office March Madness pools (thanks a heap, Michigan State). This is not news, but the bright lights of network television and Coca-Cola sponsorships tend to obscure the fact that the teams playing represent, you know, actual institutions of higher learning. And on-court success in March Madness doesn’t just have implications for alumni pride and t-shirt sales; one study found that advancing to the round of 16 increases applications the following year by three percent, four percent for those making the final four, and between seven and eight percent for the eventual national champion.

So congratulations to those schools in the Sweet 16, which kicks off tonight. But for the potential influx of applicants, it’s important to look at the price of their newly-minted dream school.

This rings especially true for working-class and first-generation students, whose first exposure to higher education may not be through a college or career advisor, or a family member, but through the glitzy production value of CBS Sports. So before the nation turns its sporting eyes to this weekend’s Sweet 16 and Elite 8 games, we thought it would be good to look at how good a deal these students can expect at the 16 remaining institutions. Without further ado, here’s the Sweet 16 of Equity and Affordability—in bracket form, naturally—measuring the net price of each college for low-income students (those from families making $30,000 or below, reported to IPEDS): 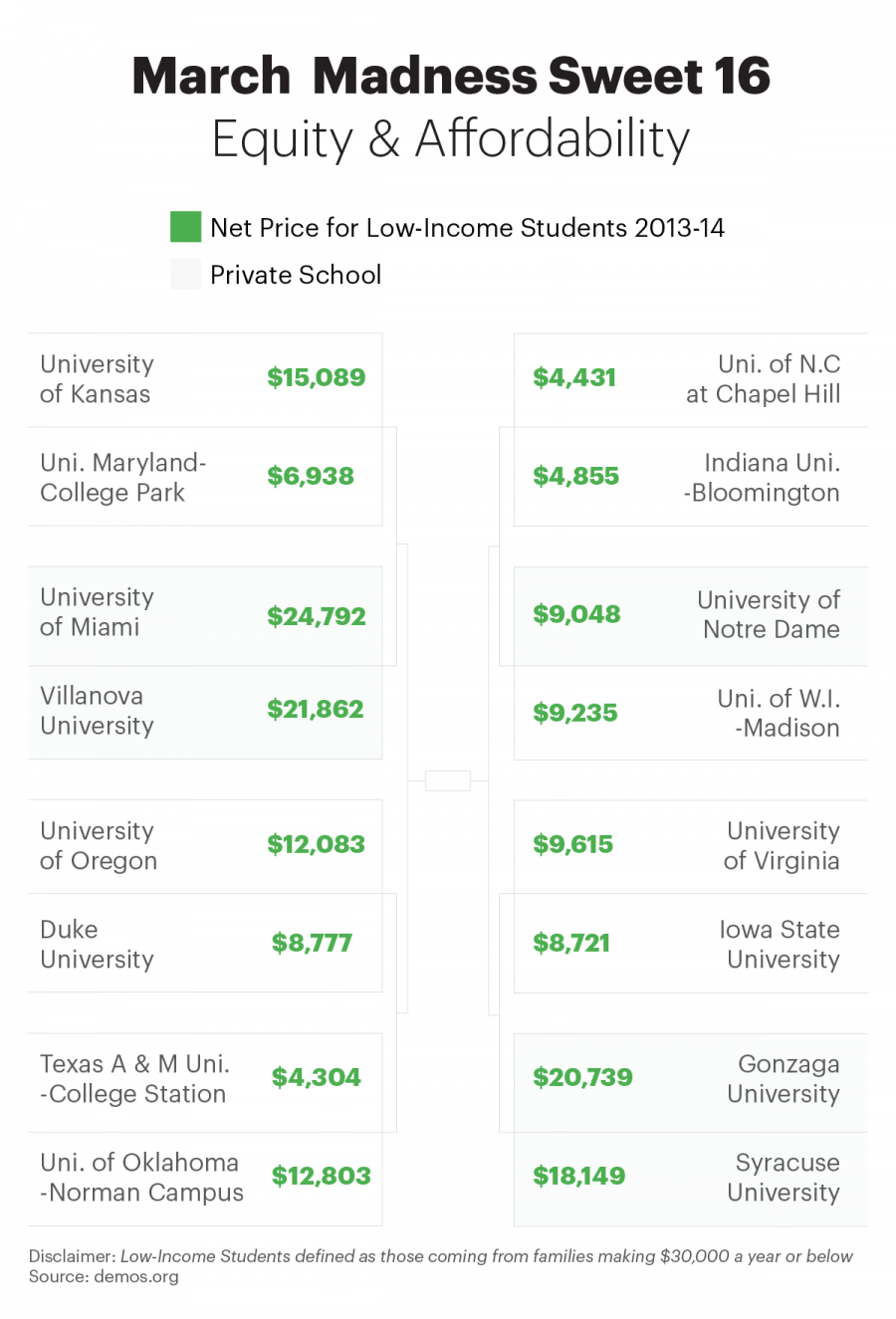 Now, to be certain, Duke (like Notre Dame and even the public-in-name-only UVA) enroll very few working class and low-income students. So the students receiving this better deal—especially compared to those at Duke’s next opponent, Oregon—are few and far between.

But in a way, this exposes one of the fundamental lies of American higher education: that public colleges are still affordable for the students who most stand to gain from attending them. The high annual net prices are in many ways a comment on institutional choices—dangling merit aid to out-of-state students who, say, get hooked by the Final Four—but it’s clearly a reflection of a decades-long austerity agenda that has gutted state higher education budgets and forced families to reach further into their pockets. That’s why it’s crucial that state and federal policymakers work to reinvest in public higher education, and do so in a way that guarantees low-income students and students of color a reasonable net price that they can hope to afford.

And if, like me, your bracket is busted beyond repair and you’re looking for a rooting interest—check out Friday night’s matchup between North Carolina and Indiana: In recent years, both colleges gave their underserved students a fighting chance at graduating with minimal debt. Or cheer for Texas A&M to beat up on Oklahoma, who charges nearly three times as much to low-income students as its former Big 12 rival.

Off the court, it’s probably time we hold up all states and institutions to similar standards.