Adam Lioz
On the 56th anniversary of Bloody Sunday, President Biden announced an Executive Order requiring federal agencies to submit plans to the White House within 200 days on how they can promote voter registration for eligible persons they serve.
Image
Voting Rights & Access

Today, on the 56th anniversary of Bloody Sunday, President Biden announced an Executive Order requiring federal agencies to submit plans to the White House within 200 days on how they can promote voter registration for eligible persons they serve. The Executive Order represents a major step forward on an initiative Demos promoted as a top priority for the incoming Biden-Harris Administration, and indeed has championed for many years.

For 15 years, Demos has worked with allies to enforce the National Voter Registration Act (NVRA). The law, passed in 1993, is often known as “Motor Voter” and is akin to a junior Voting Rights Act—lesser known, but very effective at breaking down a key barrier to the ballot.

Anti-Black and anti-immigrant politicians created voter registration in large part to keep the voting rolls lily white—and impediments to registration still serve as a racist barrier to the ballot for Black, brown, and indigenous communities today.

The NVRA requires DMVs and public assistance agencies to provide eligible Americans the opportunity to register to vote whenever they apply for or renew services, or change their address. The law also includes strong protections against states removing voters from the rolls based on bad data or flimsy logic—a practice known as “voter purges.”

Our work to ensure that [state agencies] fulfill their NVRA responsibilities has led to more than 3 million voters applying to register at state agencies across approximately 2 dozen states.

Our work to ensure that DMVs and state agencies that administer the Supplemental Nutrition Assistance Program (SNAP), Temporary Aid to Needy Families (TANF), and Medicaid fulfill their NVRA responsibilities has led to more than 3 million voters applying to register at state agencies across approximately 2 dozen states. 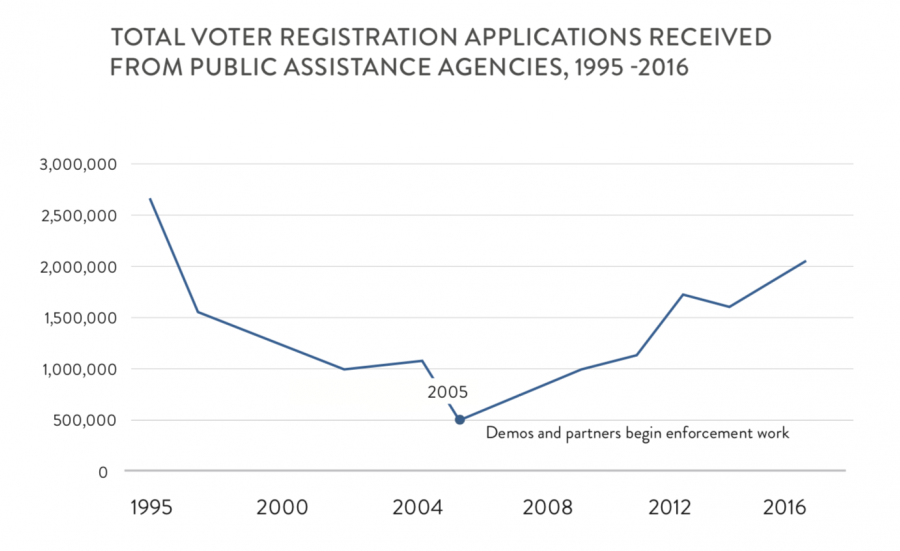 In addition to requiring the above agencies and those that administer disability services to provide voter registration, the NVRA requires states to designate additional agencies. The law specifically names federal agencies as potential designees, and requires these federal agencies to “cooperate with the States” “to the greatest extent practicable.”

Recognizing that federal agencies such as Indian Health Services, U.S. Citizenship and Immigration Services (USCIS), and federally administered Health Benefit Exchanges interact with millions of potential voters, and disproportionately serve the Black, brown, and Indigenous communities most often excluded, Demos pressed the Obama Administration to designate these and other federal agencies under the NVRA.

For various reasons—including problems with Healthcare.gov and competing priorities—the Obama Administration failed to act beyond some improvements to registration at USCIS. The Trump Administration’s immediate baseless claims of voter fraud and open hostility to inclusive democracy forced a pause in the effort. But, President Biden ran on a promise to prioritize racial equity, including through expanding opportunities for Black and brown communities to have a stronger voice in our democracy—signaling a renewed opportunity.

As soon as President Biden was elected, Demos began pressing the incoming Administration to use executive action to build a more inclusive multiracial democracy, and our top recommendation was to direct federal agencies to provide voter registration services.

Given that orientation during his campaign, Demos also worked to ensure designation of federal agencies as sites of voter registration was a key part of advocates’ recommended executive platforms leading up to the election. As soon as President Biden was elected, Demos began pressing the incoming Administration to use executive action to build a more inclusive multiracial democracy, and our top recommendation was to direct federal agencies to provide voter registration services.

Today’s Order opens the door to take a huge leap forward in mobilizing our national government’s existing programs and resources to build a more inclusive democracy, and can help millions of Americans push past a key barrier to the ballot.

It is fitting that President Biden announced this Order today. Bloody Sunday led directly to Congress passing the Voting Rights Act, often called the “crown jewel” of the Civil Rights Movement. The VRA remains a critical protection, but it is under direct assault, both in body and spirit. The Supreme Court, after gutting a key provision in 2013, may be poised to remove more of the VRA’s teeth after hearing arguments just last week. And, fueled by Trump’s Big Lie, partisan politicians across dozens of states are on a relentless and racist drive to shrink an electorate they fear.

It’s also critical that President Biden paired today’s action with voicing strong support for transformative legislation such as the For the People Act and the John Lewis Voting Rights Advancement Act. Executive action is necessary but not sufficient to make our democracy more free and fair.

The House passed the For the People Act last week. The Senate is due to take up the legislation in a hearing on March 24th, and must not let the Jim Crow filibuster get in the way of swift passage. Congress must then prioritize other structural reforms to our democracy, including the John Lewis Voting Rights Advancement Act, the Native American Voting Rights Act, D.C. statehood, expansion of the federal judiciary, and pro-worker labor reforms like the PRO Act and the Public Service Freedom to Negotiate Act.

After centuries of work to build towards a truly inclusive, multi-racial democracy we’re at a moment of both peril and opportunity.  Powerful forces seek to turn back the clock. President Biden’s Executive Order honors John Lewis’ and Dr. King’s legacies and ensures the long arc of the moral universe bends a bit towards justice today.

It’s time for America to lead by example and take action to repair our broken system. There is much work to do around the world, but for this country, saving democracy must start at home.
Blog
Taifa Smith Butler