My name is Amshula Jayaram, and I am a Senior Campaign Strategist at Demos, a dynamic “think-and-do-tank” that champions ways to address deep-seated inequity in our political and economic systems and puts communities of color at the center of how and why we do our work. I focus on advancing democracy reforms and, as part and parcel of that, supporting policies that advance racial equity. I am also a constituent and tenant in East Flatbush, Brooklyn. I am testifying today in enthusiastic support for Public Financing of Elections in the final FY2019-20 Budget. This critical reform cannot wait.

Public financing of elections is one of the best policy mechanisms available for opening up our democracy and advancing racial equity in New York State. I applaud the Senate and the Assembly for expressing support for this important legislation in their respective 1 House Budgets and look forward to its passage.

In my testimony I will address the specific ways in which our current system of campaign finance reform suppresses the political power of people of color and why that lack of political power has proven to be so consequential. I will also address why public financing is an effective way of increasing the power and participation of marginalized groups, a shift which will strengthen our democracy.

While reform has been largely touted as an issue of good governance, it is also an issue of racial justice. Arguments about the obvious impact of money in politics on racial equality have struggled to find a place in the debate on reform, which as a consequence has deprived the issue of its full moral imperative. Indeed, voting rights and campaign finance reform are two sides of the same coin.1 Updating antiquated voting laws that disproportionately disenfranchise people of color will only take us so far in a system that pits the vote against the wallet – and the wallets are in the pockets of rich white men. The proposal before this Committee presents not just an opportunity, but a choice to reject a racially discriminatory status quo in favor of a system that will bring us closer to a truly representative and inclusive democracy.

Over ninety percent of the donor class is wealthy, white and male. Despite the diversity of our country in 2019, the face of power remains much the same as it did at America’s founding, as illustrated in Figure 2, below. Whether or not one supports campaign finance reform, there can be no disagreement that large donors play an outsized role in who is able to run for office, who wins elections, and what issues get attention from elected officials.2 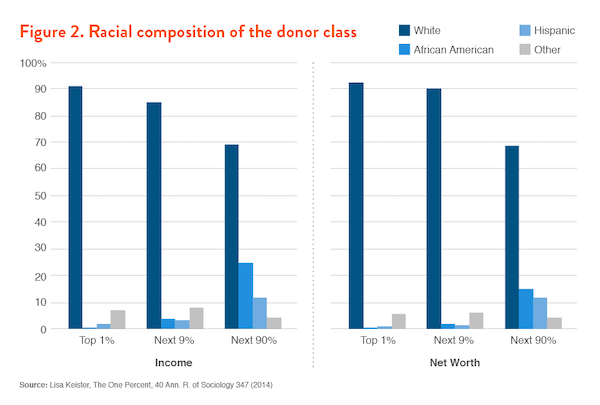 This trend of white donor class domination is consistent at the state and federal levels, as the most recent data from the 2018 election cycle in New York State shows. Not only were the majority of donors wealthy and white, but most donations came from residents in just three counties: New York, Westchester and Nassau County.3 The populations in Westchester and Nassau County are over 70 percent white, and the percentage of families who live in poverty is well below the average statewide.4 5 By contrast, studies comparing New York City Council elections to the New York State Assembly elections in 2009 and 2010, respectively, found that 90% of Census blocks in New York City contained at least 1 small donor to City Council elections, whereas small donations to the New York State Assembly races came from only 30% of Census Blocks.6 Small contributions from diverse neighborhoods were far more important to City Council than to State Assembly candidates—in the case of contributors from the Bedford-Stuyvesant neighborhood of Brooklyn, 11 times more important.7

The issue of racial equity in the donor class, however, is not a partisan one. In the 2004 presidential election, George W. Bush raised 91.7% of contributions of $200 or more from majority white neighborhoods. John Kerry raised 89.3% of $200+ contributions from majority white neighborhoods as well. This underscores just how foundational the issue of money in politics is – regardless of ideology, all elected officials are relying on the same ultra-rich white donors who are then able to shape policy agendas of both parties.

For many years, industries like Real Estate which heavily subsidize campaigns have blocked needed policy reform. New York has been grappling with a crisis of affordable housing which has largely fallen on people of color. According to the Coalition for the Homeless, of the over 93,000 people living on the street, approximately 58 percent are African American and 31 percent are Latino.8  The Real Estate Board of New York spent heavily in the 2018 election cycle, and as a result of the impending “blue wave” in November, REBNY increased donations to Democrats from $57,000 in the 2016 cycle to $236,750. The Board also donated an additional $92,500 to the Democratic Senate Campaign Committee.9 This year has brought hopes for significant rent regulations, but the power of groups such as the Real Estate Board of New York could mean the difference not just between the passage or failure of reforms, but between robust tenant protections and a watered down bill that will be insufficient to stem the tide of evictions and protect communities of color.

Zooming out, longer term studies of the impact of campaign finance laws on policy can tell us something about the differences in priorities and values between big and small donors, and how systems which move us towards a more level playing field enable policy making that serves all communities, not just an elite few. Baylor University political scientist Patrick Flavin examined spending priorities in the various states between 1962 and 2008 and compared them with campaign finance laws. He concludes that states with strict regulation of campaign finance tend to devote more funding to distributive programs such as public assistance, housing and community development. This holds even after controlling for differences in ideology and partisanship, and significantly does not extend to non-redistributive programs.10 At a moment when New York State is grappling with housing, healthcare, prevailing wage and other issues that are critical to the very survival of working people and people of color, mitigating the influence of wealthy white donors and industry is an urgent and necessary step.

Opening the Doors to Democracy

Amongst the many successes of Connecticut’s system of public financing is the increase in diversity in the legislature. In 2012, Connecticut saw a record number of Latinx legislators, up 33% from 2010. According to Secretary of State Denise Merrill, “Public financing definitely made the legislature more diverse. There are more people of color, more young people, more women, and more young women.” Connecticut’s system also demonstrates that public financing is not a hindrance to winning election – in 2012 77% percent of successful candidates were publicly financed.11

As Chairman Myrie himself said at a recent townhall on Fair Elections, “In much of our political discussions, racial justice issues and broader democratic reforms are treated separately. But I believe that one of the biggest reasons that people of color are underserved and underrepresented by our government is precisely the fact that our election system is infected with dirty money and our people face unreasonable barriers to voting. We cannot expect to achieve racial justice and meet the immediate needs of many people of color — e.g. housing, criminal justice reform, education, and jobs — without also implementing comprehensive campaign finance reform.” The power of big donors has prevailed for too long, and the harm they have caused too deep. Campaign finance reform is a common sense measure that could be no less than transformative for democracy in New York, allowing the voices of all of our communities to be heard in the halls of power.

I thank the Committee for the time, consideration and leadership on this critical civil rights issue.