Why the Voting Gap Matters

If we do not close voter turnout gaps, our democracy is destined to become less and less representative in the coming decades

Over the last half-century, affluent Americans have turned out to vote at significantly higher rates than lower-income Americans. On the surface, this would seem to pose a serious problem for equal representation in our political system, a fundamental tenet of democracy. Yet, the expert consensus on this issue, summed up in 1999 by Benjamin Highton and Richard Wolfinger, has been that income-related voting gaps are not consequential. Election outcomes and public policy, they assert, “would not change if everyone voted.”1 Elite thought leaders and the news media have largely assimilated this view, as reflected in former Office of Management and Budget director Peter Orszag’s assertion, in 2012, that “mandatory voting would have little effect on elections.”2

Many Americans seem to echo this view. Forty-one percent of non-voters say that they don’t bother to vote because “my vote doesn’t make a difference anyway.”3 The wealthy, who vote at exceptionally high rates, do not share this view. Recent survey work on political engagement, led by Benjamin Page, found that many of the wealthy they surveyed “acknowledged a focus on fairly narrow economic self-interest” when discussing their engagement in the political process.4 Unlike the 59 percent of non-voters who say that they don’t pay attention to politics because “nothing ever gets done; it’s a bunch of empty promises,”5 affluent Americans said they frequently discussed politics with friends and engaged with elected officials. The wealthy vote for outcome-oriented reasons; they have policy preferences they want to see realized.6

Other new evidence casts further significant doubt on the idea that class bias in our electorate isn’t important. Most important, non-voters tend to be much more liberal in their economic policy views compared to voters. Thus, turnout inequality is likely more consequential than previously thought, adding new urgency to election reforms aiming to close turnout gaps and foster a more representative electorate.

After studying 30 years of data at the state level, William Franko, Nathan Kelly and Christopher Witko could not find any year in which low-income voter turnout was higher than high-income voter turnout.7 Recent research by Benjamin Page, Larry Bartels, and Martin Gilens suggests that the super-rich members of the top 1 and .1 percent turned out to vote in 2008 at a whopping 99 percent. This compares to only 49 percent turnout for citizens earning less than $10,000.8 In midterm elections, the voting gap is even more pronounced. In 2010, only 26.7 percent of citizens earning less than $10,000 voted, while 61.6 percent of those making $150,000 voted.9 Voter turnout is heavily biased towards high-income voters (see Figure 1). 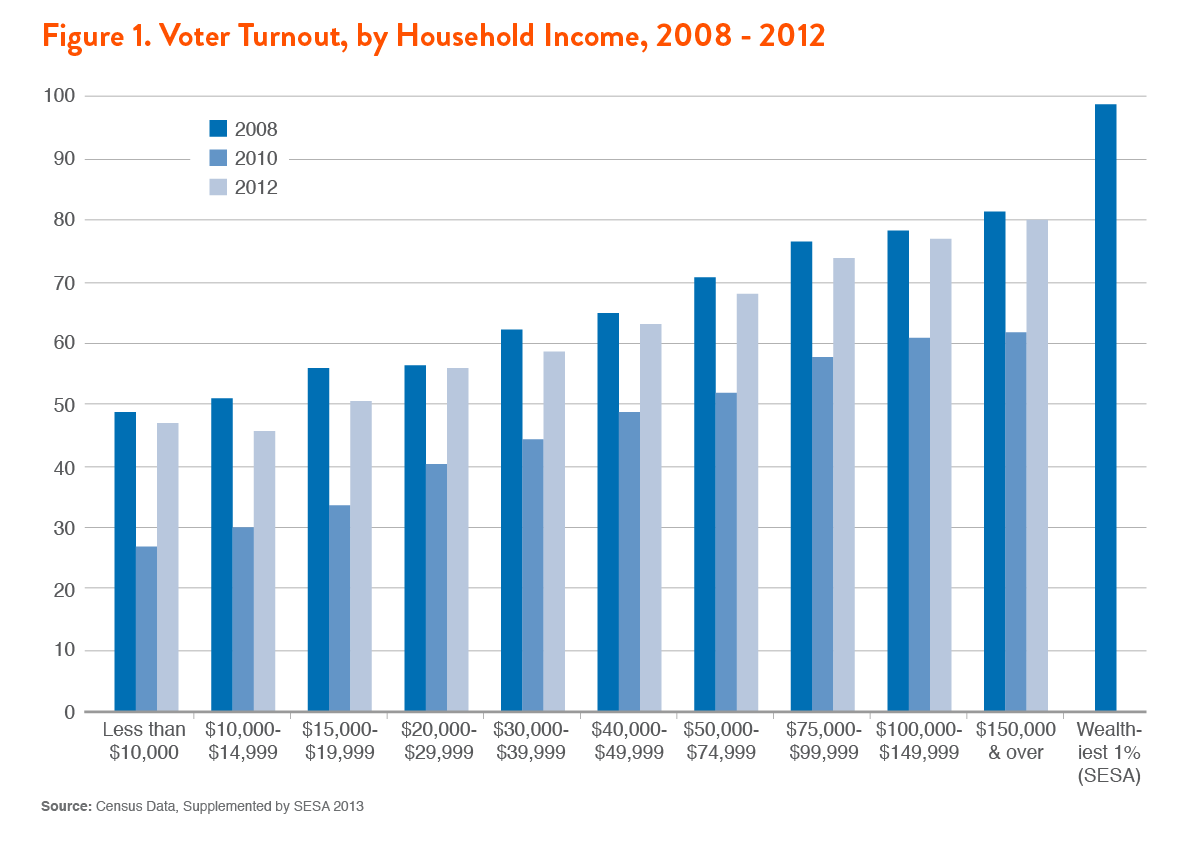 What Do Non-Voters Think?

The old political science consensus holds that voters and non-voters hold similar policy preferences. Political scientists relied on American National Election Survey (ANES) data, which suggested that “voters are virtually a carbon copy of the citizen population.”10 However, that consensus is now being seriously challenged, with three important studies showing that there are significant political differences between voters and non-voters.

In a 2007 paper that forms the basis for their book, Who Votes Now, Jan Leighley and Jonathan Nagler found that large gaps had opened up between voters and non-voters on opinions about the size of government and the proper extent of redistribution.11 As shown in Figure 2, voters are more likely to oppose unions, government-sponsored health insurance and federal assistance for schools. 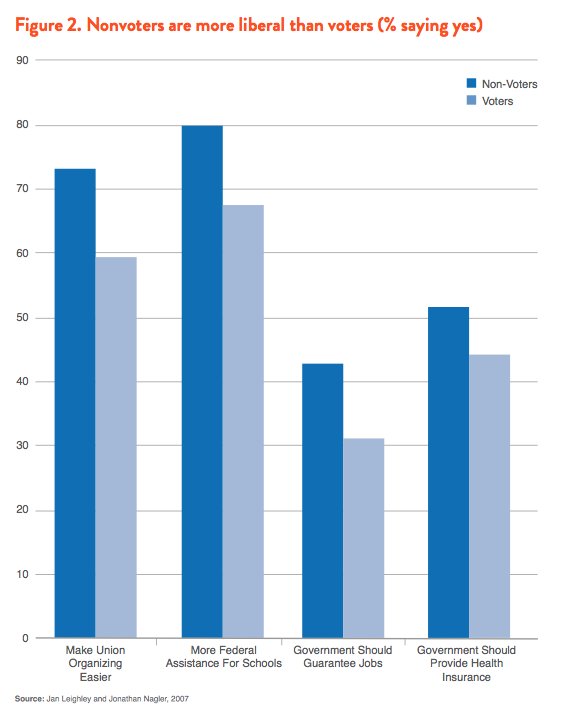 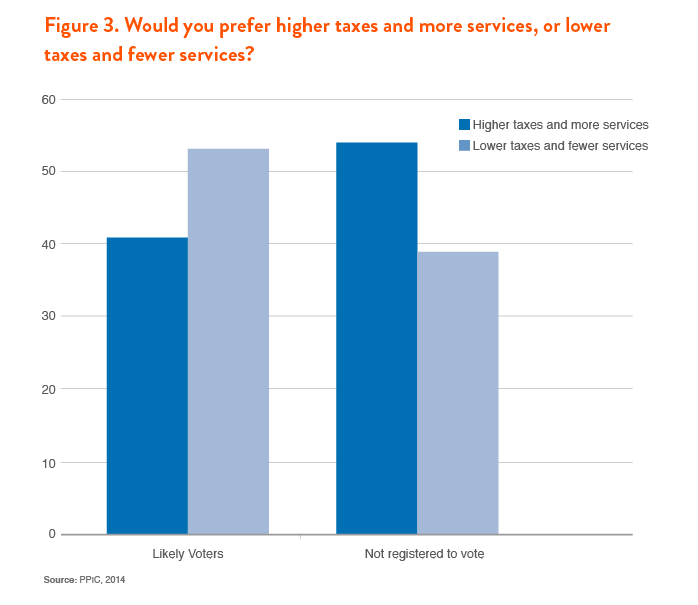 A 2012 Pew study that examined likely voters and non-voters finds a strong partisan difference. While likely voters in the 2012 presidential election split 47 percent in favor of Obama and 47 percent in favor of Romney, 59 percent of nonvoters supported Obama and only 24 percent supported Romney. The study also found divergence on key policy issues, including healthcare, progressive taxation and the role of government in society (see Figure 4).14 The splits are primarily along class lines. After reviewing evidence from the International Social Survey Programme (ISSP), Larry Bartels concluded that “No other rich country even came close to matching [the U.S.] level of class polarization in budget-cutting preferences.” 15 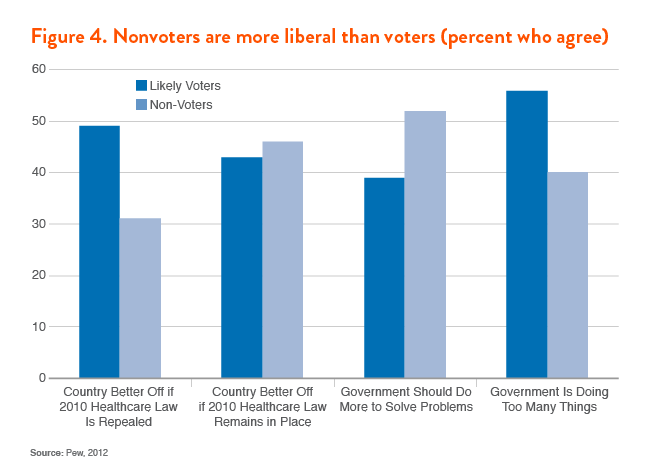 Studies show that voters are better represented than non-voters.16 Politicians don’t have strong incentives to respond to non-voters, who are disproportionately low-income. A growing body of research shows that, when turnout is more equal, politicians respond. In the wake of the 1965 Voting Rights Act, long-term Democratic incumbents shifted their voting behavior to respond to the newly mobilized southern black electorate17 Thomas Hansford and Brad Gomez studied more than 50 years of data and find that the “effect of variation in turnout on electoral outcomes appears quite meaningful.”18

On a more theoretical level, the Median Voter Theorem—which postulates that democratic systems will produce policy outcomes that align with the preferences of the median voter—also points to turnout gaps as a source of policy bias toward more affluent households. Because non-voters are more economically liberal than voters, the median voter is more conservative than the electorate at large. If more low-income people voted, politicians would become more economically liberal to court the new voters.

Is There Evidence that Turnout Gaps Matter for Policy?

In an oft-quoted Supreme Court opinion, Louis Brandeis noted that the states often serve as laboratories of democracy.19 Turnout inequality, which varies from state to state, may be an overlooked part of this story.  The evidence suggests that higher levels of turnout equality would push policy in a more economically liberal direction—which is to say, a direction more in accord with the views of the full populace.

In Franko’s turnout levels study, he and his co-authors examined all fifty states over more than three decades and found that “where the poor exercise their voice more in the voting booth relative to higher income groups, inequality is lower.”20 In another study, Franko examined voting gaps and policy outcomes in three areas—minimum wages, anti-predatory lending laws and SCHIP (State Children’s Health Insurance Program).21 He finds that states with smaller voting gaps across incomes had policies more favorable to the poor. States with low turnout inequality have a higher minimum wage, stricter lending laws and more generous health benefits than those with high turnout inequality. Further evidence comes from James Avery and Mark Peffley, who find that, in states with higher rates of low-income voting, politicians were less inclined to pass restrictive eligibility rules for social benefits.22 Other research shows that states with a more pronounced turnout bias spend less on social welfare.23 Thus, the evidence confirms what median voter theory would predict: closing low-income voting gaps is consequential for public policy and would better reflect the views of all citizens, including lower-income households.

How Can We Close the Voting Gaps?

Fewer than 50 percent of people in the lowest income bracket vote,24 and it is increasingly clear that voting gaps of this magnitude are a significant factor in biasing public policy against a large majority of Americans, which includes large numbers of low-income households, and in favor of the comparatively tiny group consisting of the most affluent households. Thus, closing voting gaps is significant not only for strengthening the integrity of our electoral system but for achieving a democracy that improves the lives of all Americans, not just the affluent.  Fortunately, there are well-proven, commonsense policies that states can adopt to boost voter turnout and reduce the voting gaps between high- and low-income people.

Since the end of World War II, voter turnout has never risen above 65 percent of the electorate.41 Disproportionately, these non-voting citizens are low-income, young, less educated and people of color;42 at the same time, they are growing as a share of the eligible electorate. If we do not close the turnout gaps, our democracy is destined to become less and less representative in the coming decades. Already, a large literature shows that the opinions of lower-income citizens have almost no influence on policy.43 By closing the turnout gaps, we can help to arrest the growing misalignment of our political system and ensure that our democracy is working to represent the views of all Americans, not just the most affluent Americans.