Why the Fiduciary Rule Matters

What is the fiduciary rule?

In the simplest terms, the fiduciary rule is a new regulation, proposed by the Department of Labor, which requires financial advisors and brokers to act in the best interest of people saving for retirement. Under this rule, when consulting your financial advisor they will be required to recommend the best investments for your needs, i.e. the mix of investments with the highest returns, lowest fees, or least risk.

Don’t financial advisors currently have to look out for my best interest?

No. Currently, most financial advisors are held to a lesser standard, called the “suitability standard,” which only requires advisors to recommend investments that are “suitable” for their clients’ needs. The difference is a bit arcane, but essentially, most investment advisors can legally recommend investment products that generate the largest fees or commissions for themselves or their firms, meaning they’re the worst products for everyday investors.

This happens because most financial advisors earn their money from commissions paid by the investment products they sell. So they have an incentive to steer clients into the funds that pay them the highest commissions, which generally charge higher fees and earn lower returns. This is particularly damaging for the millions of Americans whose retirement savings are in the hands of financial advisors through their 401(k)s or IRAs, as these conflicts of interest are putting their retirements at risk.

Why are financial advisors, unlike other businesses, legally allowed to sell you bad products?

Because the regulations governing financial advisors have not been updated in more than 40 years, they reflect a very different financial and particularly retirement landscape. When the rules were enacted, most Americans still had traditional pensions, which were managed by investment professionals required to act in pensioners’ best interests. Now, we live in a world where most workers depend on their 401(k)s or IRAs for their retirements, where the risks and costs of retirement security have been entirely shifted to workers. In this world of individualized retirement security, stronger protections are needed to protect savers’ nest eggs.

How much are bad advice/poor investments costing savers?
How much will the fiduciary rule help?

The White House’s Council of Economic Advisors (CEA) estimates that bad investments and poor advice cost retirement savers 1 percent in investment returns each year. That might not sound like a lot, but even 1 percent can really add up over a lifetime of saving. In 2012, we estimated the effect that high fees could have on a middle class family who saves consistently for retirement over their working lifetime. Our study, which assumes that lost returns due to high fees total a slightly-higher 1.5%, finds that high fees from bad investments translate into a nest egg that’s $155,000 smaller at retirement, a loss of nearly 30 percent.

Because the fiduciary rule would prevent many of these losses, its impact on the entire retirement savings market could be huge. We attempted to estimate its impact using data from the Investment Company Institute, the advocacy arm of the financial services industry. According to the ICI’s factbook, Americans held a total of $12.4 trillion in the 401(k)s and IRA(s) in 2013. A little over half of 401(k) and IRA assets were invested in mutual funds, while the remainder was held in a mixture of other assets, including annuities, individual stocks and bonds, company stock, and others. Using in-depth data on the allocation of retirement assets and the average fees paid by different types of assets, we estimated that retirement savers paid a total of $73 billion in fees in 2013, or an average of 0.6% of their total assets.

Under the fiduciary rule, these fees would plummet, as investors would be steered away from high fee actively-managed mutual funds and annuities in which many currently invest to lower fee investments, including passively-managed index funds, translating into billions in savings and additional returns. How much? Given that fees on index funds average around 0.2%, if we project that the rule would split the difference and reduce average fees to 0.4%, that would translate to a savings of nearly $25 billion from lower fees. It would also translate into higher returns: given that, in part because of lower fees, passively-managed funds outperformed actively-managed funds by more than 3.5% last year, if we predicted that the fiduciary rule even leads to 0.5% higher annual returns, that would translate into an additional $60 billion earned by people with 401(k)s and IRA(s). 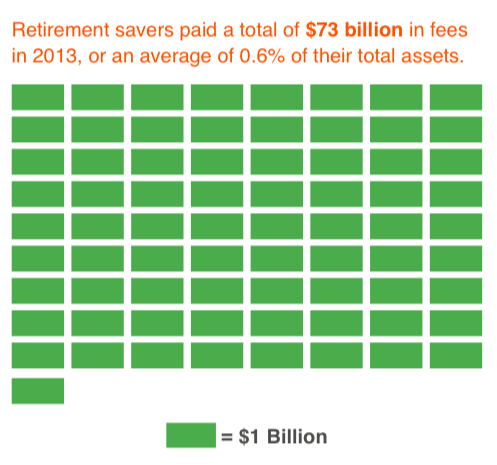