How the Gross Domestic Product (GDP) is used in measuring our economic growth and whether alternative measures are also needed to provide a more comprehensive outlook of economic progress.

What is GDP and How Is It Used?

GDP measures the output of goods and services produced by labor and property located within the U.S. during a given time period.1 It was developed in the 1930s as a way for policymakers to gauge the recovery from the Great Depression.2  Reported quarterly, GDP has become the metric economists and policymakers primarily look to for analyzing the health of our economy and setting economic policy. For instance, the White House and Congress use GDP numbers to prepare the federal budget, the federal reserve uses GDP to formulate monetary policy, and business interests look to GDP as an indicator of economic activity and performance.3 However, GDP is a measure of raw economic activity, not a complete picture of economic progress. Even its chief architect, Simon Kuznets, recognized the limitations of GDP and thought it was a poor instrument for measuring economic development. GDP was never intended to become the sole measurement of the state of our economy, let alone a measure of societal progress. But in the decades after World War II, GDP has become the go-to metric for determining whether society is progressing. Our economic policy has been largely shaped by the end goal of maximizing GDP growth without consideration of what the figure does and does not measure.

What Does GDP Measure?

The formula used to calculate GDP is:

This calculation gives the monetary value of all the goods and services purchased within national borders by persons, businesses, governments and foreigners. As a raw data analysis, GDP gives a good broad overview of the market economic activity that takes place within the U.S. However, because it does not differentiate between types of spending, and because it does not recognize non-market forms of production and values without market prices, GDP does not provide a complete picture of economic and societal progress.

For example, GDP counts just broad categories of consumption and government spending. It cannot distinguish between “good” and “bad” spending. If government spending increases due to responding to a natural disaster, like Superstorm Sandy, or if it increases due to a substantial infrastructure expansion program, there is no distinction in GDP accounting. Yet, the infrastructure program is clearly better for our overall economy and society. Likewise, if personal consumption increases, GDP counts that as a positive sign, even if the personal consumption is financed by credit cards or other means that put households in debt.

What Does It Leave Out? 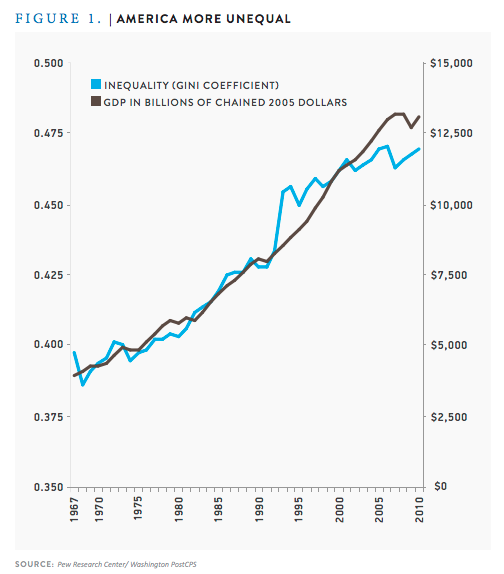 Despite being a broad measure, there are several things that GDP does not measure that are essential for both the economy and society. Most glaringly, GDP does not capture the distribution of growth and, as a result, cannot reflect inequality. Since 1979, the bottom 20 percent of earners saw their income increase by 18 percent.5  Over the same time period, the top twenty percent of earners saw their incomes increase by 65 percent and the top one percent saw their incomes increase by an astonishing 277 percent. The U.S. GDP, meanwhile, more than doubled over the last 30 years with no ability to reflect the growing income inequality. As the graph below shows, as GDP has increased, so has the level of inequality.6

Yet, this disparity is not reflected in GDP numbers. GDP cannot distinguish between a positive economic indicator, like increased spending due to more disposable income, and a negative economic indicator, like increased spending on credit cards due to loss of wages or declining real value of wages. (Since 1980, GDP per capita has increased from $25,640 to $42,722 in 20107 ; over the same time period, credit card debt increased by 285 percent to $3,480 per capita.8 )

RELATED: Does Growth Equal Progress? The Myth of GDP 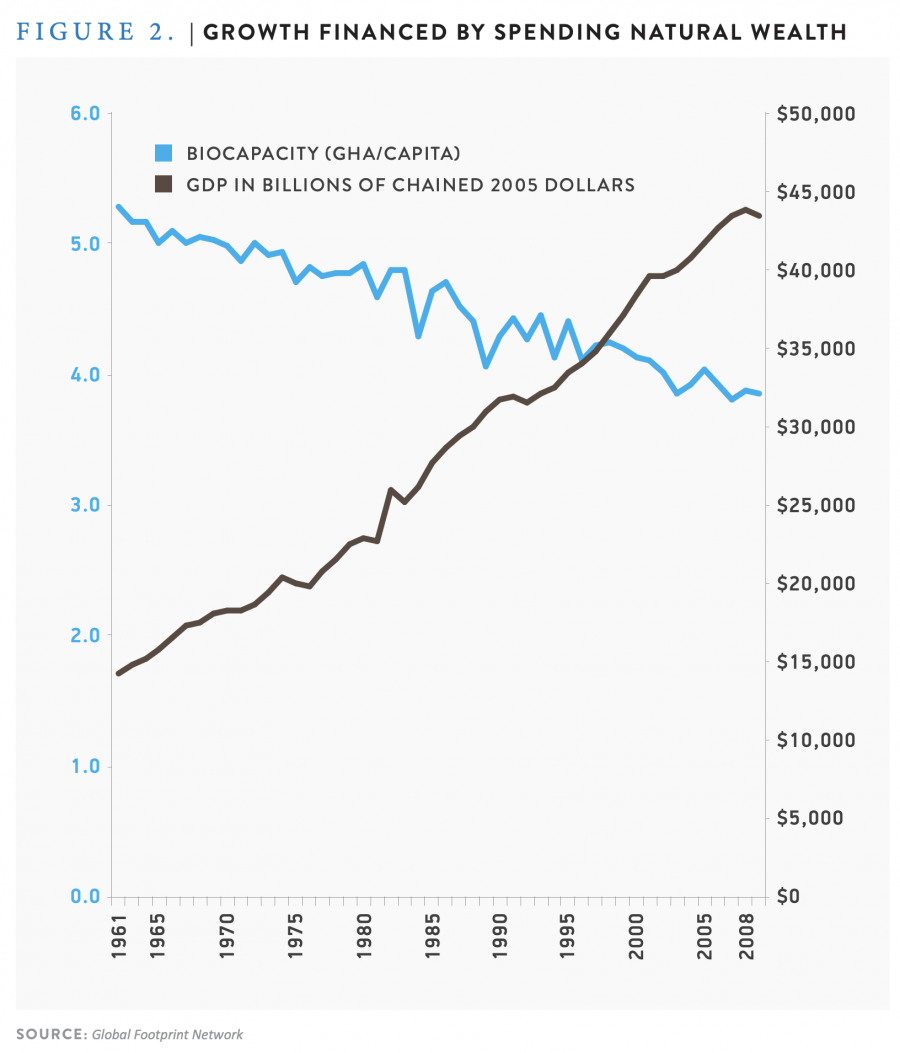 In addition, the enormous value of the country’s natural capital and ecosystems is also not reflected in GDP.9 Preserving the country’s natural resources—essential to our current and future wealth—is not counted, but exploiting them in an unsustainable manner is. only when natural resources are sold or somehow commoditized do they show up in GDP calculations. For example, if all of the fish in the sea were caught and sold in one year, global GDP would skyrocket, even though the fishing industry itself would collapse and the broader ecosystem would be damaged irrevocably. As shown below, our economic growth is increasing at a rate that cannot be ecologically sustained. 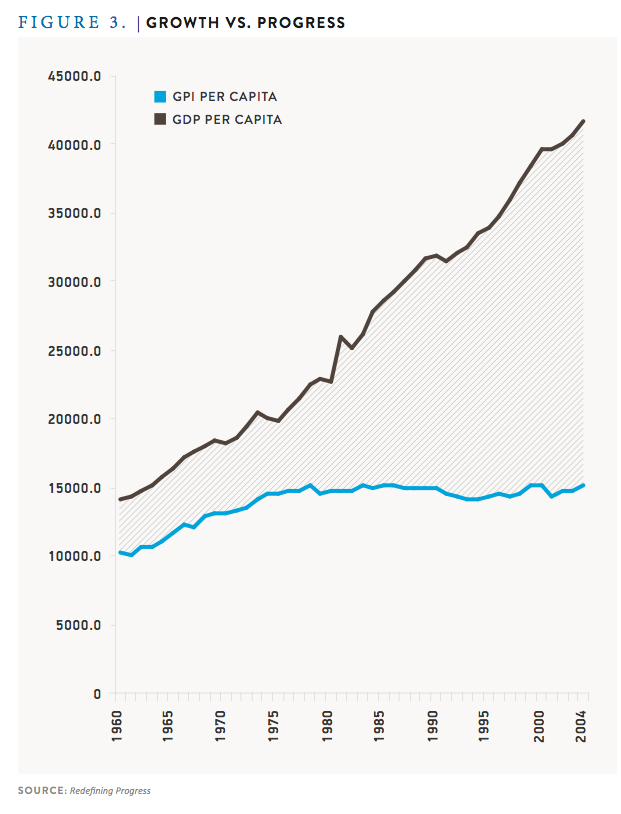 Why Does it Matter That GDP Is Seen as the Primary Metric for Progress?

The problem with over-reliance on GDP is the role that it plays in formulating policy and setting priorities. If policymakers considered GDP only as a measure of raw market economic activity in conjunction with many other metrics, the flaws in it would be less important. If poverty rates, inequality levels, natural capital accounts, and other metrics were taken into account as heavily as GDP, then different policies and priorities would begin to emerge. Instead, we are now focused solely on increasing GDP, even though increasing poverty rates, inequality levels, and other societal indicators show that in many ways, we are experiencing growth without progress.

For example, if policymakers relied on measures of natural capital as well as GDP, the value of preserving forests as "carbon sinks" and air purifiers would provide economic justification for adopting policies to preserve natural resources.10 Likewise, if economists and officials considered decreasing inequality as central to economic progress, more progressive taxation and pro-worker trade policies would be more attractive.

Are There Alternative Ways to Measure Progress?

There are several indicators that consider forms of progress ignored in GDP, such as wellness, natural capital accounting, and even gross national happiness. A more comprehensive single metric, the Genuine Progress Indicator (GPI), provides a complete picture of economic and social progress. Under Governor Martin O'Malley, the state of Maryland has been leading the way in adopting a GPI with the goal of integrating it into policymaking decisions.11

Comparing GDP growth with GPI calculations, it becomes clear that while we are growing, we are not making progress.

Over-reliance on GDP distorts decision-making affecting our economy and society. Other metrics such as the Genuine Progress Indicator are beginning to provide a more comprehensive view of economic and social progress to use when setting national priorities. As Joseph Stiglitz stated upon release of the report of the Commission on the measurement of Economic Performance and Social Progress: “What you measure affects what you do,” and if “you don’t measure the right thing, you don’t do the right thing.