Toward a Healthier, More Inclusive Florida

From March through May, New Florida Majority Education Fund surveyed over 21,000 Floridians to ask how the pandemic was affecting their lives and well-being. This report presents our findings from those surveys.

All Floridians deserve to be safe and healthy. We deserve safe space to shelter, food in our bellies, the means to take care of our families, and the ability to seek care when we’re sick.

While access to these human rights and to democracy were by no means universal in Florida before the pandemic, the coronavirus has deepened these democratic deficiencies and exacerbated inequities in access to the resources and rights we need to lead full, healthy lives. This is especially true for Black and Brown communities in Florida.

As the coronavirus pandemic was escalating, New Florida Majority Education Fund stopped all canvassing and pivoted a team of over 200 democracy organizers to doing wellness calls to people in the communities we serve. Between March and May 2020, New Florida Majority Education Fund democracy organizers called over 1 million Floridians and spoke with over 21,000 Floridians to ask them a set of questions about how the pandemic was affecting their lives and well-being. We have continued making calls to check in on Floridians and to provide resources and support to meet our community’s needs. To date, we have called approximately 1.4 million Floridians, speaking with and attempting to support more than 40,000 Floridians struggling to take care of their families and communities.

In our initial conversations as the pandemic was unfolding this spring, we found that, while Floridians of all races, ethnicities, and ages are struggling to feed our families, stay in our homes, find safe work, and access the supplies needed to keep ourselves and our communities safe, the harmful impacts of COVID-19 are hitting Black and Brown Floridians hardest. We also found that Floridians are civically engaged, filling out their census forms to ensure they are counted and making plans to vote by mail so their voices will be counted, too, this critical election year—but that the coronavirus is likely creating challenges in these areas as well.

This report presents our findings from those surveys conducted in the early days of the pandemic, from March through May, and paints a picture of the ways COVID-19 is impacting various communities in Florida.

Download the full report PDF to see the survey results 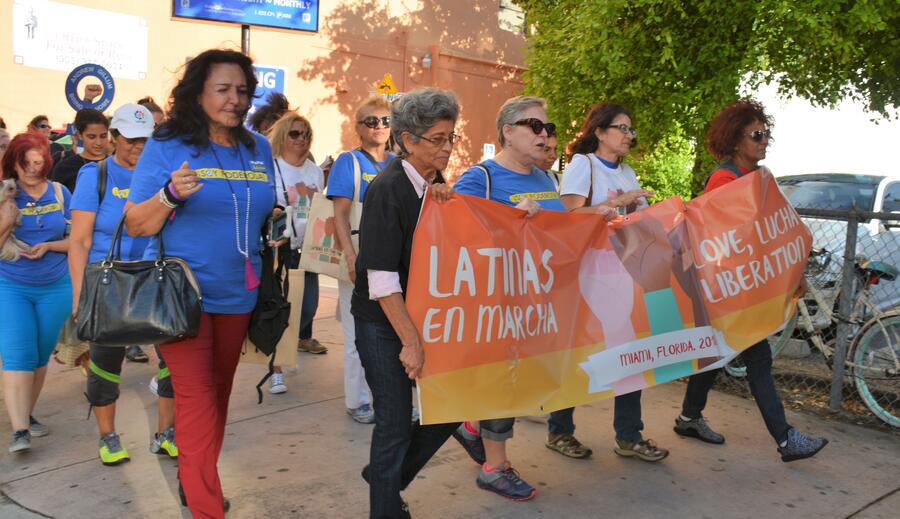 This survey was conducted in the earliest days of the coronavirus pandemic. Months later, Florida has emerged as a national hotspot of the virus. At the height of the pandemic in mid-July, Florida suffered a staggering 15,300 new cases per day and had lost more than 4,200 lives.1

At the time of this writing, Floridians are suffering about 2,600 new cases daily and have lost a devastating more than 15,000 lives in our communities.2 Just as the day-to-day impacts of the coronavirus detailed in this report are hitting Black and Brown Floridians hardest, chronic disinvestment and systematic inequity means these same Floridians are also facing higher rates of infection and death.3

Following the completion of this survey, research studies and news reports have showcased a continued widening of the racial disparities with COVID-19 and the harsh reality that Black and Brown communities are made to endure. As we face systemic inequalities, the harder times that Floridians are now facing call for immediate and holistic interventions, as detailed in the recommendations section of this report.