The steep increase in college tuition and student debt over the past decade has led our country to engage in a serious debate about the need to reduce college costs and student borrowing. Yet many misconceptions remain about the scope or magnitude of the problem that student debt poses to our national economy and student debtors’ financial security.1,2 More than 44 million Americans, or nearly 1 in 5 adults, now carry student debt. That share is even higher among millennials, one-third of whom have student loans.3 And the burden of carrying student debt isn’t borne equally— today more than half of African American households under age 40 have student loan debt.4 Student debt has negative impacts for many borrowers; studies show that student debtors have less savings, more difficulty purchasing homes, and less retirement savings.5 However, student debt is particularly damaging for individuals who struggle to repay their loans: borrowers who are seriously delinquent on their payments or who default on their loans. Delinquent borrowers are saddled with fees, penalties, and rapidly-accumulating interest; borrowers who default on their loans face ruined credit and a debt often several times their original loan balance. Even worse, they cannot even turn to bankruptcy for relief from their loans, unlike most other kinds of debt, and face a debt collection process that is often punitive and draconian.6

In fact, nearly 40 percent of student loan borrowers are either in default or more than 90 days past due on their student loan payments. And importantly, the majority of people struggling to pay back their college loans have relatively small amounts of debt; half owe less than $16,400. This belies the common media portrayal of struggling borrowers as carrying excessive amounts of debt beyond the average, and brings into question whether a higher education system financed primarily by debt is putting undue risk on students trying to build skills and climb the economic ladder. And it isn’t just borrowers who didn’t earn degrees who are struggling to repay their loans; in fact, a quarter of borrowers with bachelor’s degrees are in default or seriously delinquent on their loans. In this brief, we use data from Experian, one of the three major credit rating bureaus in the United States. Our analysis examines the repayment status of student loan borrowers, analyzing the nature of student loan defaults and delinquencies, and the role of student loan balances on an individual’s overall financial security. As the brief shows, there is no “safe” amount of student debt: borrowers with small balances struggle to repay them at the same rate as borrowers with higher balances. That’s why this brief concludes with a series of policy reforms to address the underlying causes of rising student loan debt and the very real struggles millions face in repaying their loans.
KEY FINDINGS

We use the term distressed borrowers throughout the brief to collectively refer to borrowers in either of the latter two categories, i.e. who are either seriously delinquent or in default.
DATA
The calculations for this brief were generated from a data set on the demographics and finances of student debtors obtained from Experian. The data set was created from the credit records of 35,000 student debtors, sampled from Experian’s entire credit database in December 2014. It contained a wide range, including:
CHARACTERISTICS OF DISTRESSED BORROWERS
Most borrowers in default owe small amounts
Individuals in default on their student loans borrow at essentially the same levels as borrowers able to pay on time. The median student loan balance among borrowers in default is $16,381, slightly higher than the median balance of borrowers who are current on their payments, $15,654. As Figure 1 shows, a third of borrowers in default owed less than $10,000 in 2014, 56 percent owed less than $20,000, and 83 percent owed less than $50,000. It is important to note that these owed amounts include fines, capitalized interest, and other penalties; thus, the original amounts borrowed were likely much lower for many borrowers now in default. 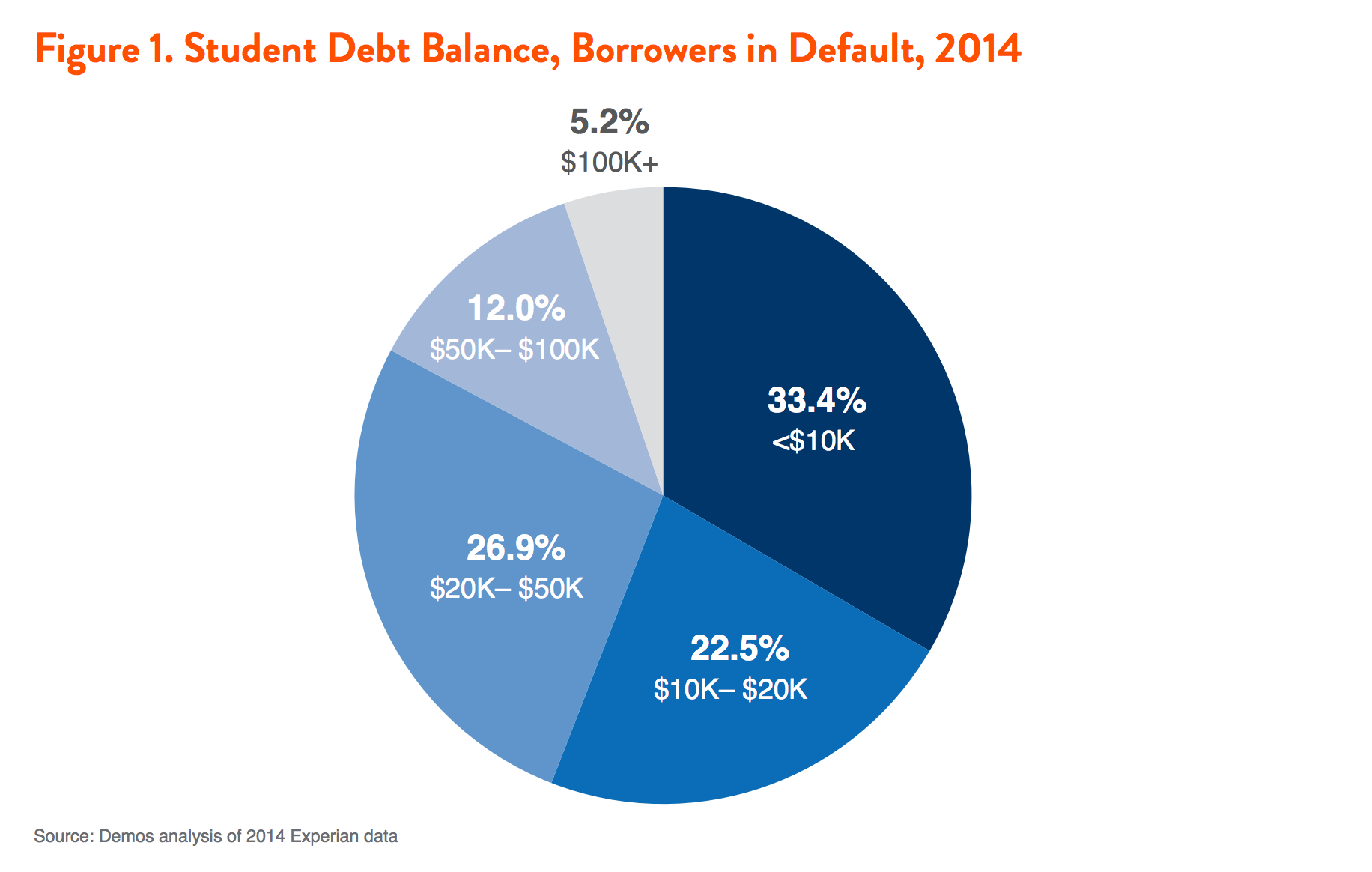 When we examine the default rate by amount of student debt, we find no relationship between the amount borrowed and the chance that a borrower defaults on their loans. As Figure 2 shows, borrowers with the smallest balances—less than $10,000 in student debt—defaulted on their student loans at almost the exact same rate as borrowers with the largest balances—more than $100,000 in debt; their default rates were 13 percent and 14 percent, respectively. Borrowers with balances between these two extremes—with between $20,000 and $100,000 in debt—defaulted at almost the exact same rate as well. This clearly shows that default is not tied to the amount of debt taken out to pay for college, but rather caused by borrowers’ economic and other circumstances. 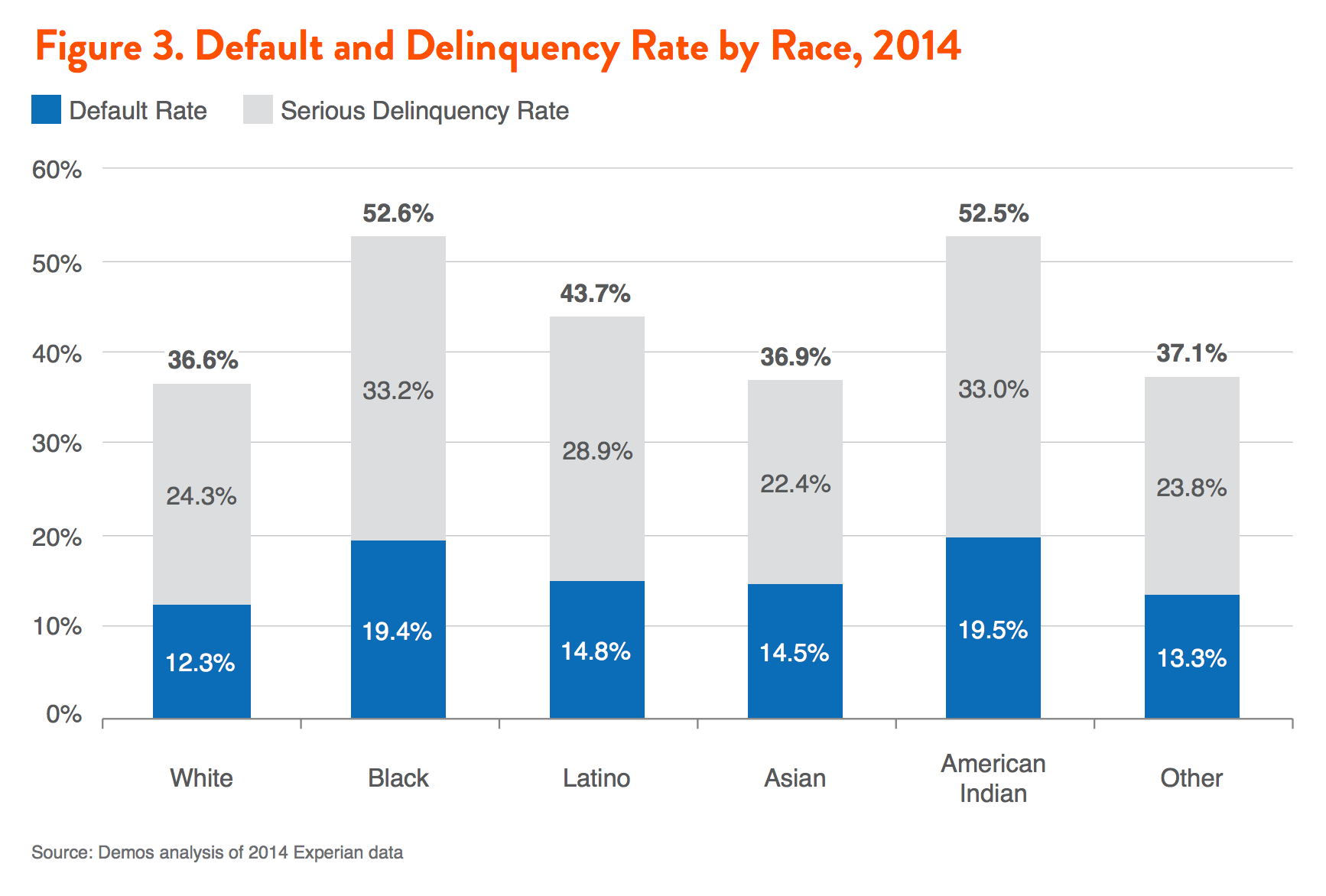 contributors to black and Latino borrowers’ higher default rates are lower average incomes for college graduates of color, and higher attendance at sub-par for-profit schools whose degrees are less valuable or worthless. For black student debtors, who tend to have higher average student debt balances, these factors make their debt more difficult to repay.8 The lower incomes of graduates of color, in particular, make taking on debt especially risky for them. The median white worker with a bachelor’s degree earned $63,338 in 2014, about $13,000 and $11,000 more, respectively, than the median income of their black and Latino counterparts.9 If the loan payments for the average indebted white graduate are around $3,500 per year, this means that the average white graduate with student debt is in better financial shape than the average black or Latino graduate with no student debt.10
More likely to have lower incomes
A borrower’s income is one of the other strong predictors of default. Nearly 20 percent of borrowers earning less than $25,000 per year were in default, more than double the 9 percent default rate among borrowers earning more than $100,000 annually, as shown in Figure 4. In fact, the default rate is significantly lower for borrowers earning $50,000 per year or more, which shows how deeply the possibility of default is tied to whether borrowing for a college degree paid off in higher earnings for borrowers, which can often be beyond borrowers’ control. 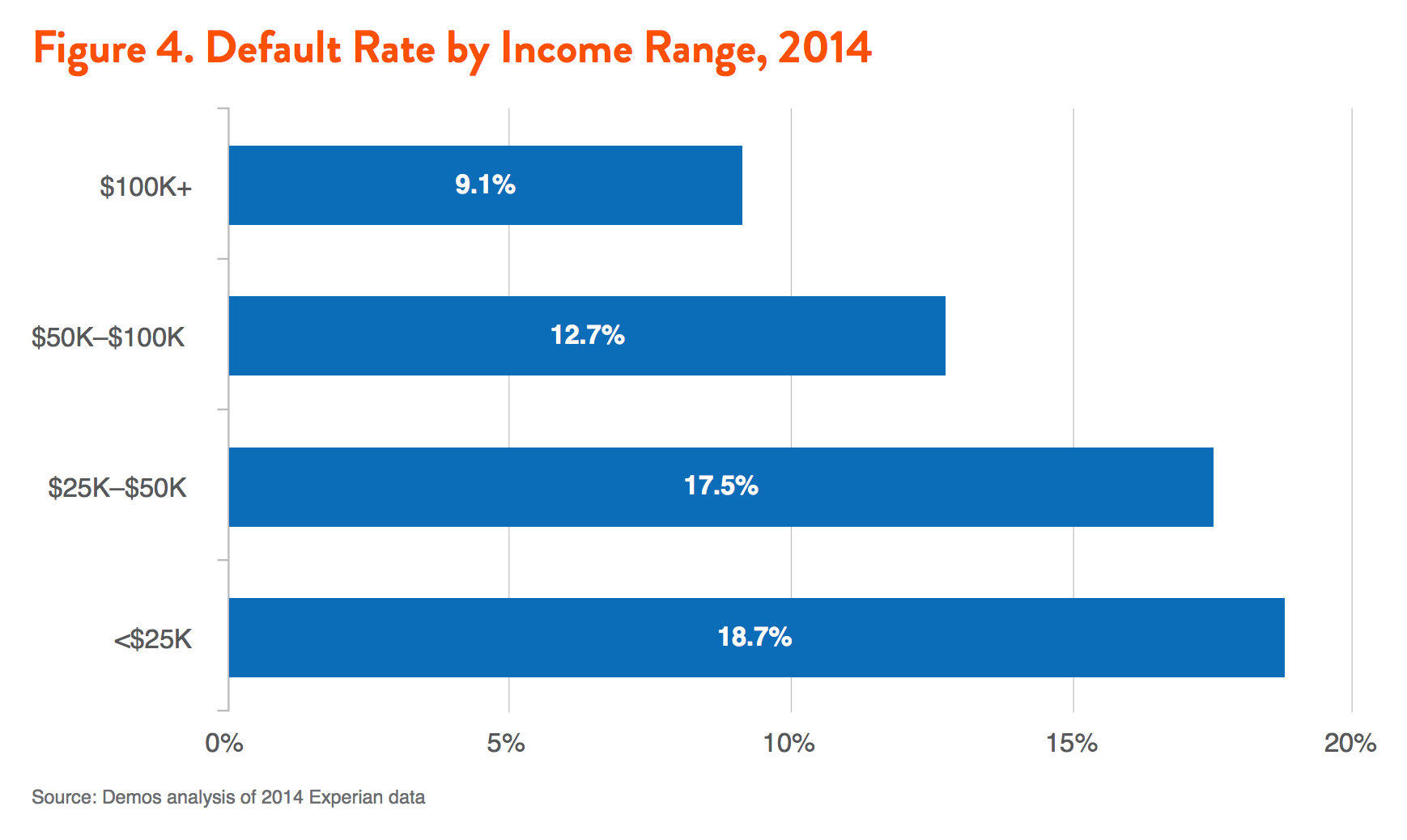 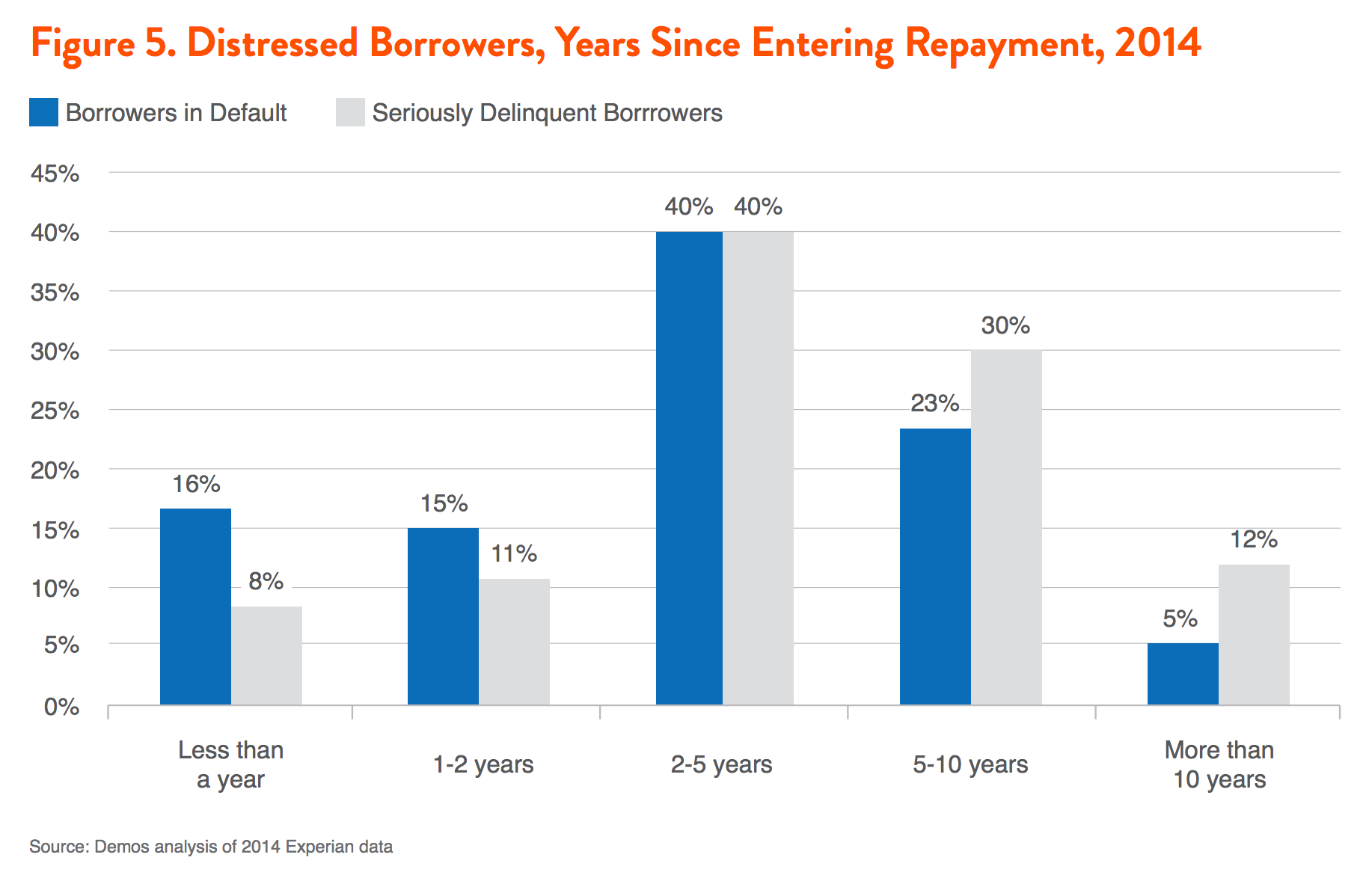 EFFECTS OF DEFAULT AND DELINQUENCY ON FINANCIAL SECURITY
Given that most borrowers who struggle with repayment are simply students for whom the economic benefits of a college degree didn’t materialize (or didn’t materialize quickly enough to prevent hardship), the damaging effect of default and delinquency on their financial security is particularly burdensome. Because, unlike other kinds of debt, we don’t allow borrowers to modify or discharge their student debt burdens in bankruptcy, or refinance their loans to lower interest rates, these debt burdens can lead to damaged credit, the inability to purchase a house, and even bankruptcy, despite the lack of relief it provides.
Distressed student debtors are significantly more likely to declare bankruptcy, despite the fact that their student loans still must be repaid after doing so: more than 11 percent of borrowers in default have declared bankruptcy, compared to 8 percent of seriously delinquent borrowers and just 4 percent of borrowers who are current on their student loans. Individuals struggling to repay their student debt also have a hard time repaying their credit cards: 46 percent of borrowers in default and 37 percent of seriously delinquent borrowers have had a credit card in collections or major delinquency (180+ days past due), compared to just 11 percent of student debtors who are current on their payments. These gaps are likely due to distressed borrowers being forced to postpone credit card payments, leading many lenders to send their credit card debt to collections. These difficulties are reflected in distressed borrowers’ credit scores: among borrowers in default the mean credit score is 541, and among seriously delinquent borrowers it is 539, compared to a mean credit score of 678 for on-time borrowers. These average scores mean that most borrowers in default or seriously delinquent borrowers have a credit score rated as “poor” or “very poor,” which would make it nearly impossible to obtain a loan.
This difficulty obtaining credit is shown in both the homeownership rates and credit card usage of distressed student debtors. Just 10 percent of borrowers in default and 15 percent of seriously delinquent borrowers have mortgages, compared to 38 percent of borrowers who are current on their payments. Borrowers in default and seriously delinquent borrowers are also much less likely to have credit card debt, probably because lenders have closed their credit cards or denied applications for new ones. Thirty-three percent of borrowers in default and 46 percent of seriously delinquent borrowers have credit card debt, far lower than the 78 percent of on-time borrowers who do.
WHAT NEEDS TO BE DONE?
To address the symptoms of student debt, we need a comprehensive solution, one that both provides relief for existing debtors and prevents the next generation of students from having to go into debt to obtain a college degree. To prevent future students from being forced to borrow, we need to reinvest in public higher education, restoring funding to the levels of decades prior with funds earmarked for reducing tuition and additional need-based grant funding. Demos’ policy recommendation, the Affordable College Compact, proposes a federal-state compact to ensure debt-free public college, in which the federal government provides matching grants to states that ensure the majority of their poor, working- and middle class-students can attend college without incurring debt or financial hardship. Relief for current borrowers needs to include allowing existing borrowers to refinance their student loan debt at a lower interest rate, and reforming bankruptcy laws to allow for the discharge of student debt for the borrowers in deep financial distress. The Compact represents a fair, achievable path to return to debt-free college. But action needs to happen now, before even more borrowers fall behind on their student loans and end up in a financial hole they can’t climb out of.
ENDNOTES
1. Claudio Sanchez, “Is The Student Loan Crisis Fact Or Fiction?” NPR, July 28, 2016, http://www.npr.org/sections/ed/2016/07/28/487032643/is-the-student-loan-crisis-fact-or-fiction.
2. Beth Akers and Matthew M. Chingos, Game of Loans: The Rhetoric and Reality of Student Debt, Princeton University Press, 2016, http://press.princeton.edu/titles/10810.html.
3. Data: Student Loan Data Update 2016, Federal Reserve Bank of New York, https://www.newyorkfed.org/microeconomics/data.html.
4. Demos calculations of 2013 Survey of Consumer Finances.
5. Robert Hiltonsmith, At What Cost? How Student Debt Reduces Lifetime Wealth, Demos, 2013. http://www.demos.org/what-cost-how-student-debt-reduces-lifetime-wealth
6. Natalie Kitroeff, “Loan Monitor Is Accused of Ruthless Tactics on Student Debt,” New York Times, January 1, 2014, https://www.nytimes.com/2014/01/02/us/loan-monitor-is-accused-of-ruthless-tactics-on-student-debt.html?_r=0
7. First, we used the 2013-2014 American Community Surveys to generate demographic breakdowns for each zip code in the country, as well as average incomes for each race/ethnicity in each zip code. Then, we assigned a probability that each person in our Experian data set was of a particular race/ethnicity based on their reported zip code and income in the Experian data set. We then aggregated these probabilities over the entire data set to generate the overall default rates by race.
8. Mark Huelsman, “The Debt Divide: The Race and Class Bias Behind the ‘New Normal’ of Student Borrowing,” Demos, 2015. http://www.demos.org/publication/debt-divide-racial-and-class-bias-behind-new-normalstudent-borrowing
9. Bureau of Labor Statistics, “Median Weekly Earnings by Educational Attainment and Race/Ethnicity in 2014.” (Note: the figures in the paper were converted to yearly earnings). https://www.bls.gov/opub/ted/2015/medianweekly-earnings-by-education-gender-race-and-ethnicity-in-2014.htm
10. Assuming the average white graduate owes $25,000 (from NPSAS 2012 data), earns $63,338 (as above), and is in the standard repayment plan.
11. Mary Nguyen, “Degreeless in Debt: What Happens to Borrowers Who Drop Out?” Education Sector, February 2012.http://educationpolicy.air.org/publications/degreeless-debt-what-happens-borrowers-who-drop-out