Public Jobs in Massachusetts are more likely than private-sector jobs to be good jobs that provide a family-supporting income and wealth-building benefits. They need to be preserved.

In Massachusetts, the very rich are getting much richer, the poor are getting poorer, and those in the middle are stagnating. Workers in Massachusetts, as in the nation generally, have seen little to no wage growth since the 1980s.1  From 1979 to 2014, Massachusetts households at the 20th percentile averaged a 0.2 percent decline in income annually. The median household averaged only a 0.5 percent increase annually. This increase is better than a decline, but it is very close to no growth. The richest 1 percent of households, however, had a strong 4.3 percent average annual income growth.2  This trend has made Massachusetts the 6th most unequal state in terms of the ratio of income of the top 1 percent to the bottom 99 percent.3

An important factor behind these income trends is the slow and steady decline in “good jobs” that we have seen nationally.4  Good jobs pay a wage that can support a family and have benefits that help a family build wealth.5  Families need wealth or assets to have long-term economic security; wealth allows them to weather financial emergencies and to invest in their future.

Public-sector jobs in Massachusetts are more likely than private-sector jobs to be good jobs that provide a family-supporting income and wealth-building benefits, so they need to be preserved. At a time of growing economic inequality, jobs in the public sector help preserve the middle of the income distribution—the middle class. Public-sector jobs also help build strong communities because Bay State public-sector workers are more likely to be long-term community residents, increasing neighborhood cohesion, strengthening civic engagement, and reducing crime.

Massachusetts, like the nation as a whole, needs to maintain the good jobs that it has, and enact policies to create more good jobs. Dismantling public-sector jobs is a step in the wrong direction, a step that will hurt Massachusetts families and communities. Policymakers should keep the public-sector jobs the state has and use them as a guide for developing policies to make more jobs in the private sector good jobs.

The Data and Analysis

This analysis of the economic benefits of public-sector jobs in Massachusetts is based on comparisons of private-sector and state and local public-sector workers in the data from the 2012-2016 American Community Survey.6  The analysis also examines workers by race and Latino ethnicity. The American Community Survey is a nationally representative survey of the American population with a sample size of about 3.5 million per year.7  The data used is a 5-year pooled sample. This large sample size provides enough cases for a detailed analysis of relatively small populations—Massachusetts public-sector workers by race and Latino ethnicity. While the sample size is a strength of the American Community Survey, the weakness is that there are few detailed economic measures. This weakness places limits on some of the analyses, which are noted in the context of the specific analyses.

A good job has, at minimum, a good hourly wage and good benefits.8  We approximate the hourly wage and health insurance data from the American Community Survey to obtain a rough sense of which sector is more likely to have good jobs.9

A “good-job wage” can be understood as a wage that can support a family. More specifically, it can be defined as a wage that would yield at least 60 percent of the median household income for a full-time, full-year worker. This is a wage standard that is sometimes used in cross-national poverty comparisons.10  To better reflect the local cost of living, the Massachusetts median household income will be the benchmark instead of the national median. In 2016, the minimum for a good-job wage for Massachusetts would be $20.47 per hour or $42,572.40 annually for a full-time, full-year worker.11 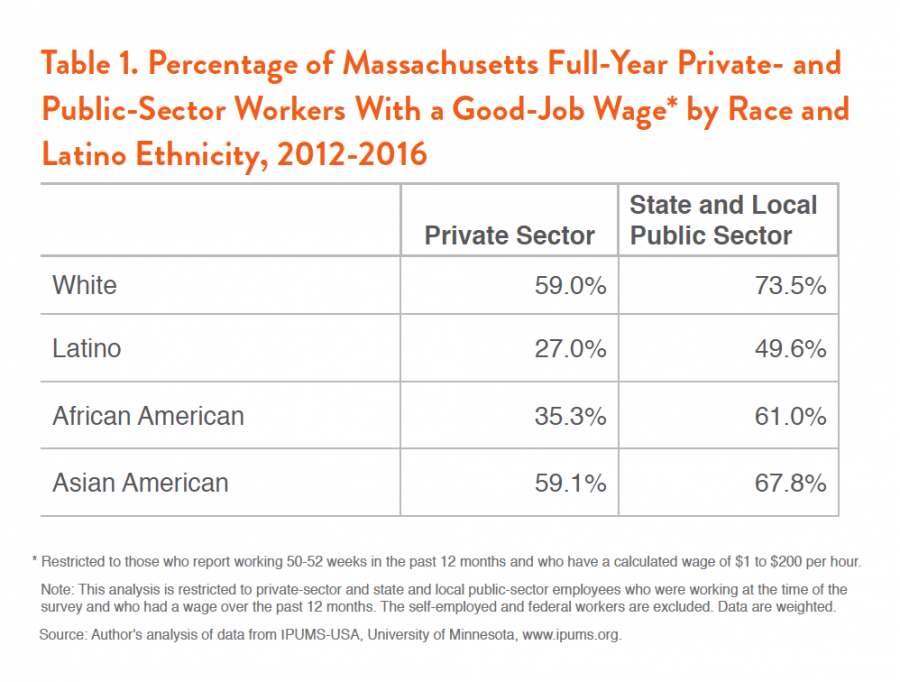 On the other hand, public-sector workers are disproportionately female, and women tend to be paid less than men. Is the public-sector advantage in good-job wages even stronger when we take this into account? 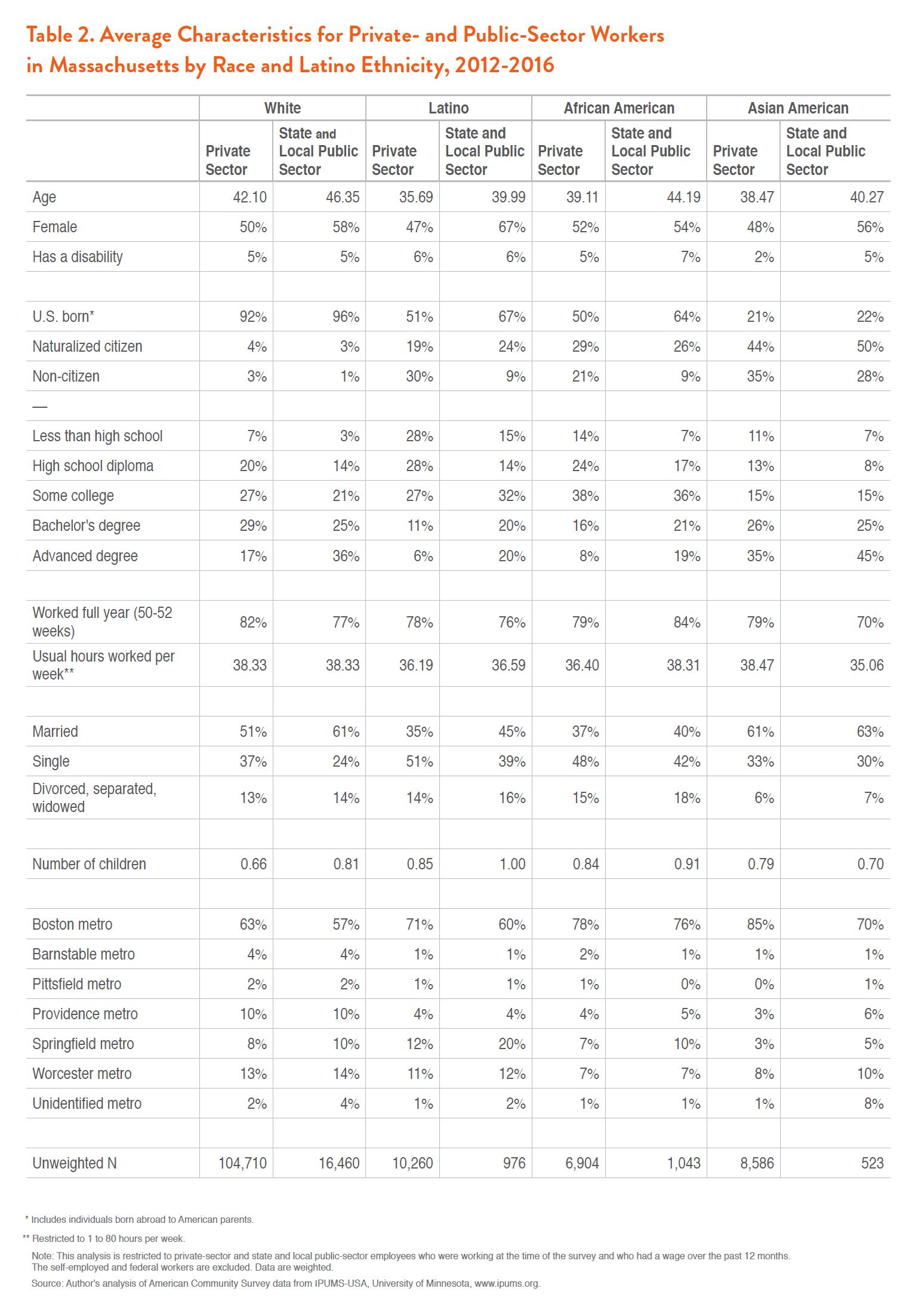 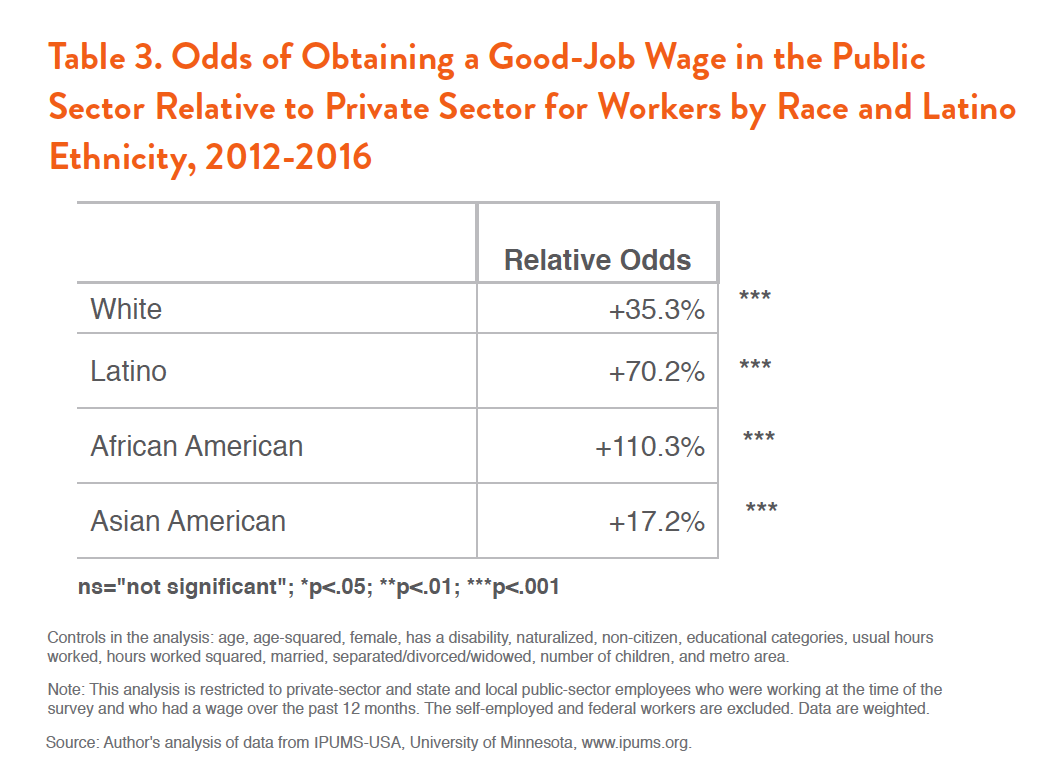 Unfortunately, the American Community Survey is not clear about whether health insurance obtained from work is due to the individual’s job or to a relative’s job. And it is not clear whether insurance is offered at work if the individual does not obtain coverage from work. Spouses are a possible source for health insurance coverage for adults, and parents are a possible source for individuals under 26.14  To reduce these sources of inaccuracies, the following analysis focuses on unmarried individuals over 25 years of age. These 2 restrictions minimize the likelihood that the individual obtains health insurance from a relative. They also reduce the sample size by about 70 percent. Luckily, the large sample size still leaves enough cases for analysis. 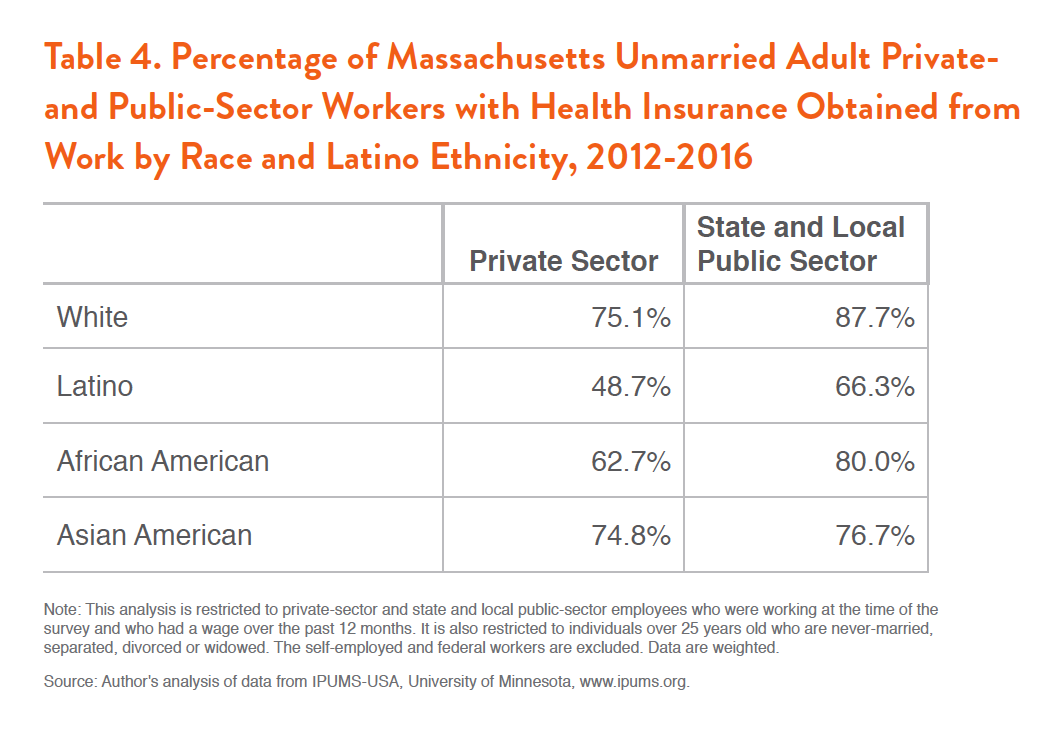 Because of the limitations of the American Community Survey, we operationalize a good job as having 2 elements: a good-job wage and health insurance from work. (Since the American Community Survey does not have data on retirement accounts, retirement accounts cannot be included, as is often done in similar analyses.15 ) This also requires us to restrict the analysis to unmarried adults over the age of 25, to have a more precise health-insurance measure.

Given the findings on good-job wages and health-insurance coverage, the findings on good-job rates are not surprising; they are very similar to those for good-job wages. About half (49.2 percent and 51.9 percent respectively) of unmarried adult white and Asian-American workers are in good jobs in the private sector, as Figure 1 shows. In the public sector, two-thirds (66.8 percent) of these white workers and a little less than two-thirds (60.6 percent) of these Asian-American workers have good jobs. Only a fifth (20.1 percent) of unmarried adult Latino private-sector workers have good jobs. The good-job rate nearly doubles (37.7 percent) for these Latinos in the public sector. About a third (30.2 percent) of unmarried adult African-American private-sector workers are in good jobs, but half (52.6 percent) have good jobs in the public sector. 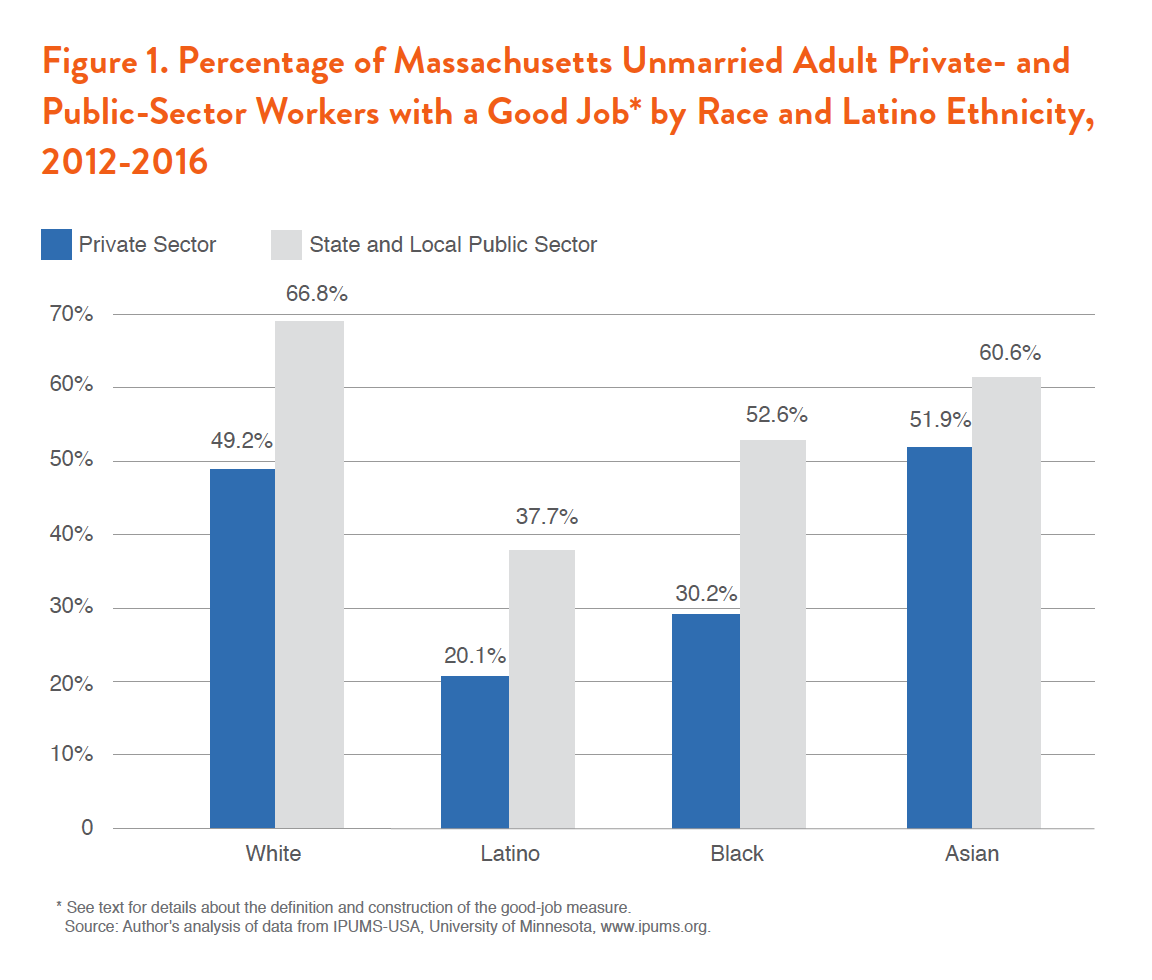 Is this good-job advantage due to public-sector workers being more likely to have college degrees or being older? By adding control variables, we can compare public-sector workers with private-sector workers who are similar with regard to educational backgrounds, age, and other characteristics. After controlling for differences in background characteristics, for all groups, public-sector employment increases the odds that individuals will have a good job, as shown in Table 5. The impact is largest for unmarried adult African Americans. They double their odds (an increase of 102.2 percent) of employment in good jobs by working in the public sector. Latino and white workers almost double their odds. Unmarried adult white and Latino people working in the public sector are both about 70 percent more likely to be in a good job than their peers in the private sector. Asian-American workers also experience significantly increased odds (51.5 percent) of being in a good job by working in the public sector. 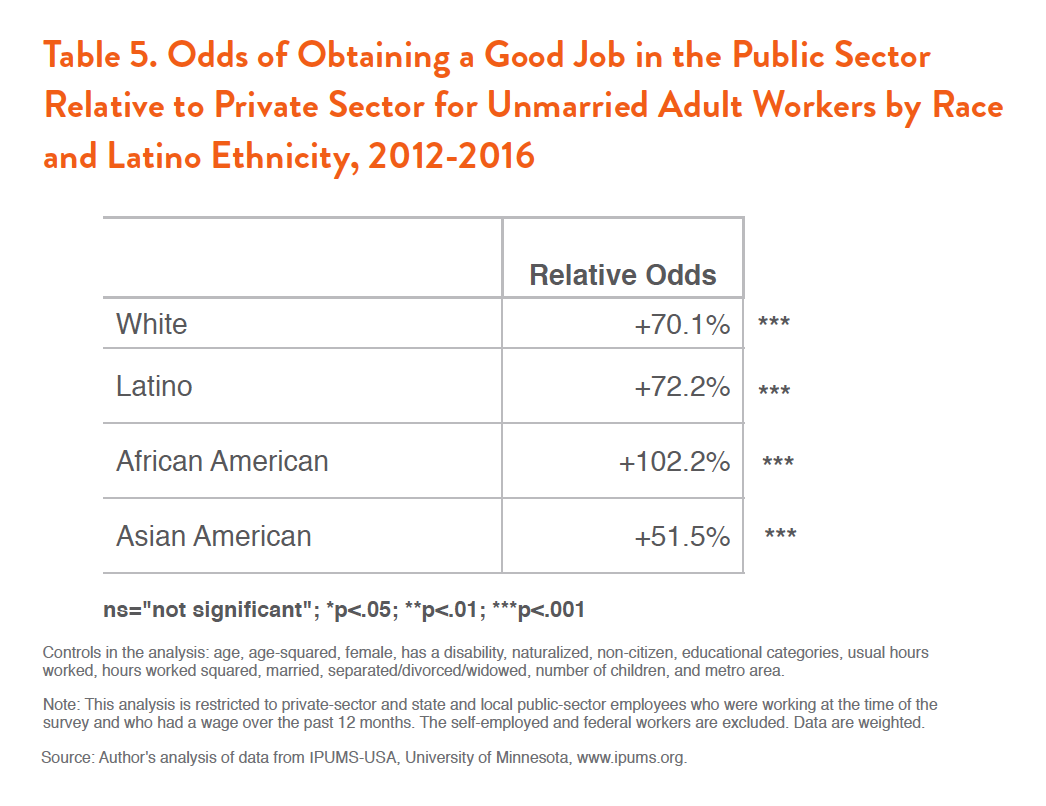 For all racial and ethnic groups, public-sector employment increased their odds of being employed in a good job that provides good wages and benefits. Public-sector jobs help individuals escape poverty and provide for their families. A loss of public-sector jobs would mean the loss of good jobs in Massachusetts.

Wealth or net worth “is a superior indicator of financial status because it embodies the total economic resources available to its holder.”16  People draw on their wealth during financial emergencies, such as for unexpected repairs, an illness or a job loss. Wealth also helps individuals invest in their future, for instance by helping pay for a child’s college education or starting a business. Wealth provides a family with much broader economic security than income alone.

The American Community Survey allows us to assess whether or not an individual is a homeowner and it has information about the value of the home. “For all [racial] groups, the largest single contributor to total net worth is an owned home.”17  Additionally, those with home equity tend to have other sources of wealth.18  Homeownership therefore can give us useful, if incomplete, information about public-sector jobs and wealth. 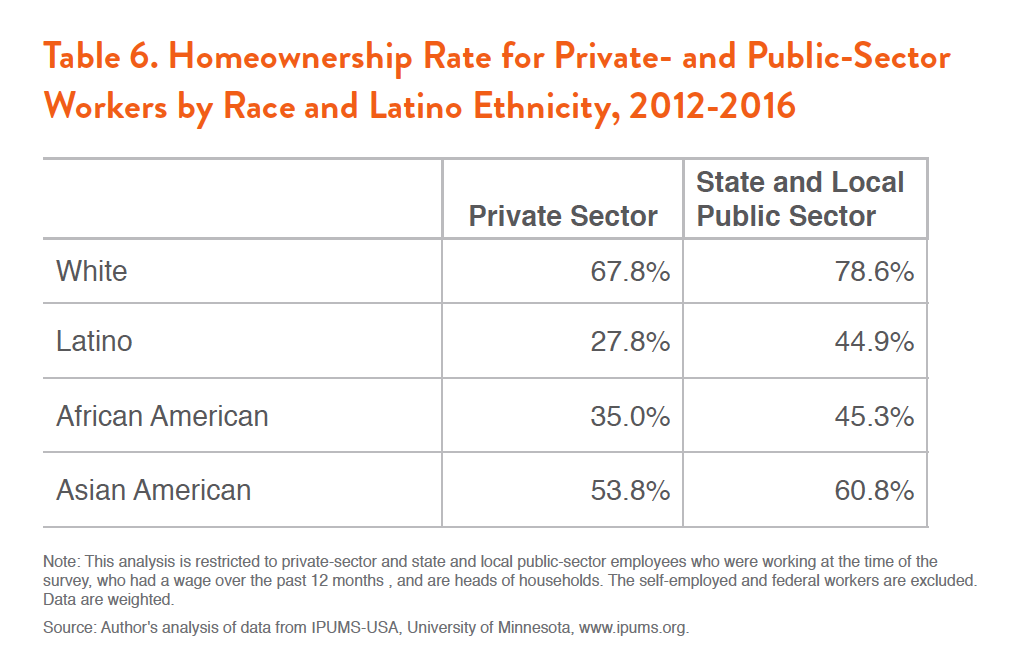 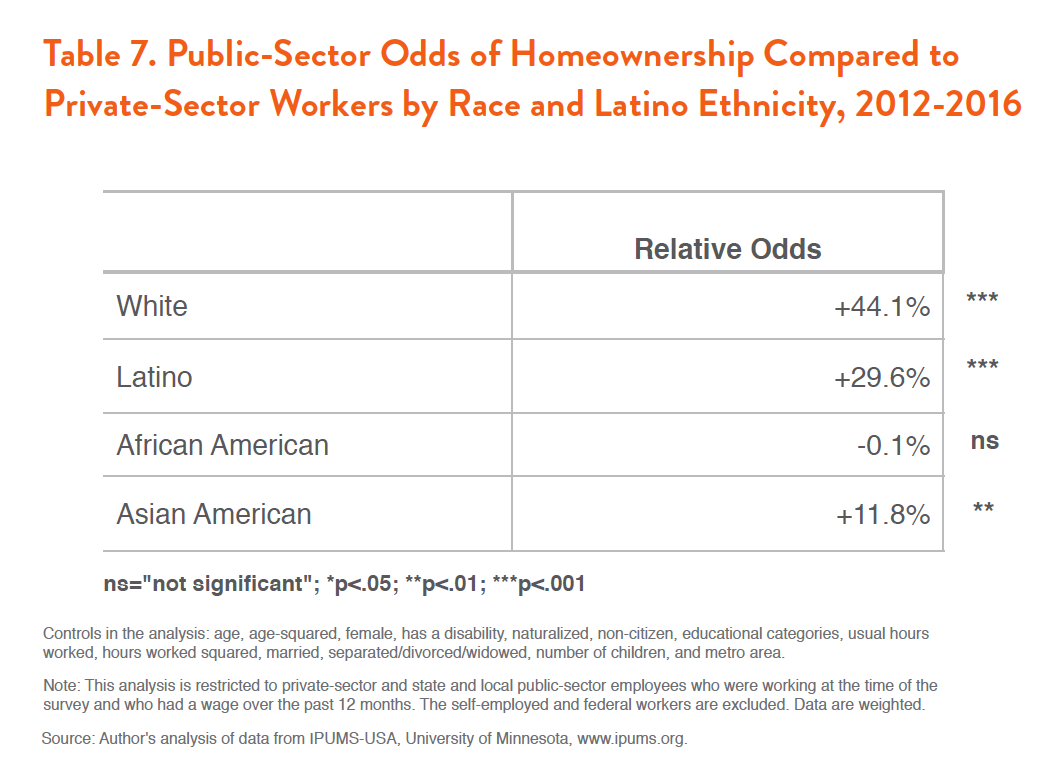 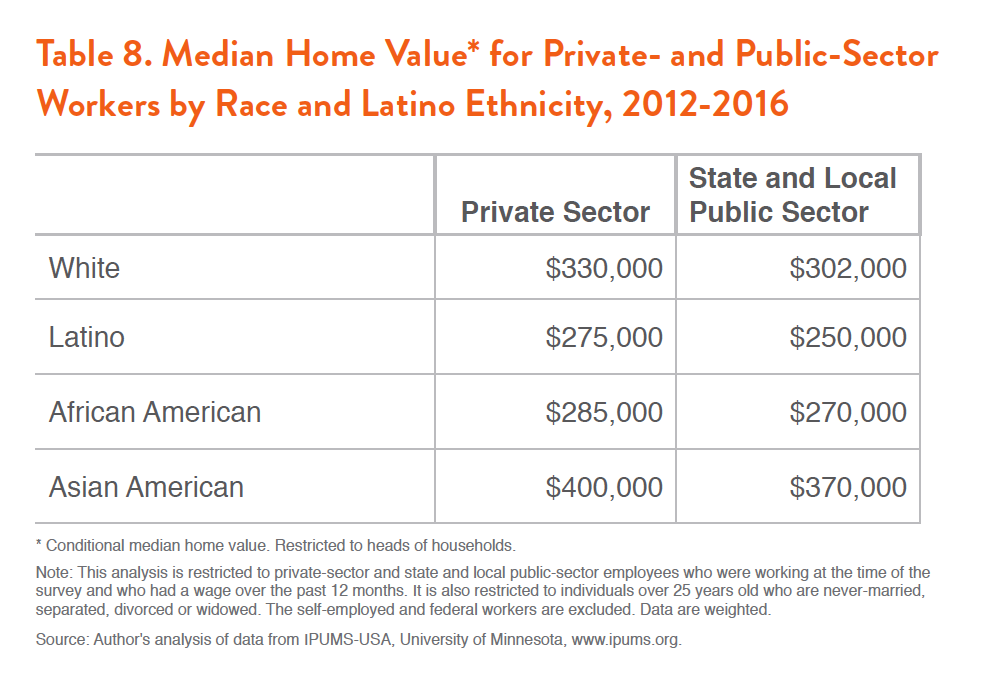 It is important to take into account differences in age, gender, and educational attainment between public- and private-sector workers, since they can affect economic outcomes. These characteristics may hide underlying similarities or may even be suppressing greater differences. 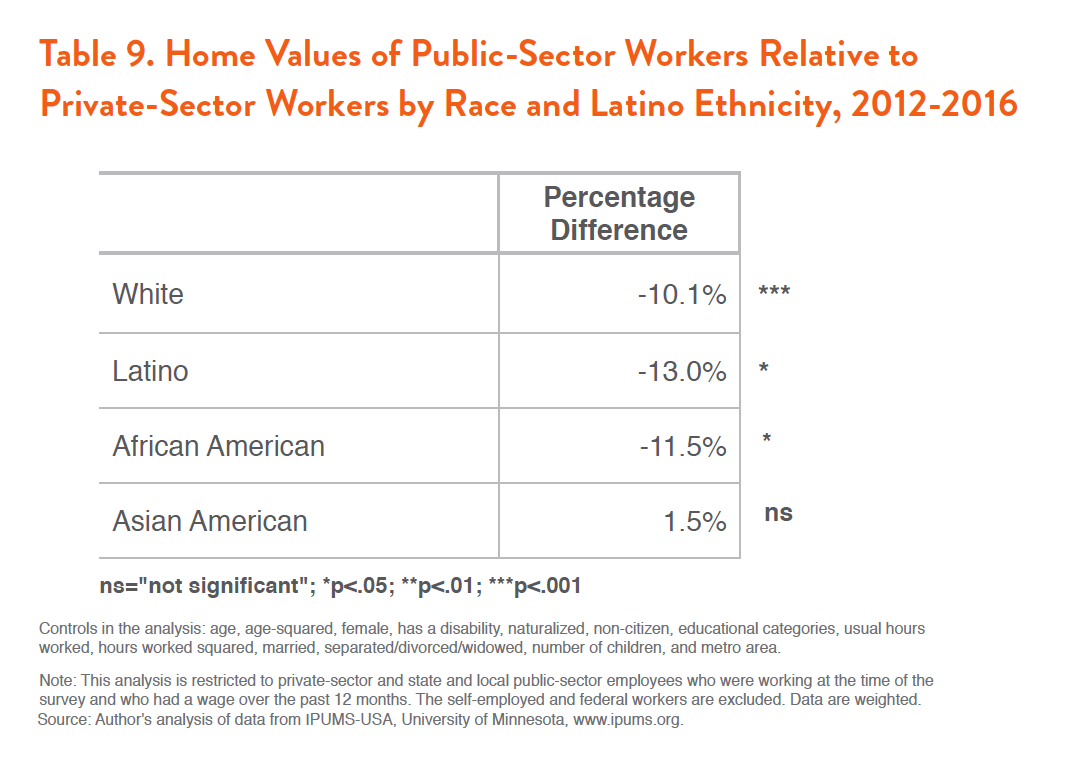 So far, we’ve looked at the benefits of public-sector jobs to workers and their families, but it is also important to think about how these benefits can reverberate throughout communities. One measure that sheds light more directly on the potential community impact of public-sector jobs is the length of continuous residence a household has in a community. Residential stability is associated with positive outcomes at the neighborhood level including less crime, more social support and cohesion among neighbors, and more civic participation.21

Table 10 shows the rates of 10 or more years, or “long-term,” continuous residence by racial and ethnic group.22  Public-sector workers are more likely to have lived in the same residence for 10 or more years. 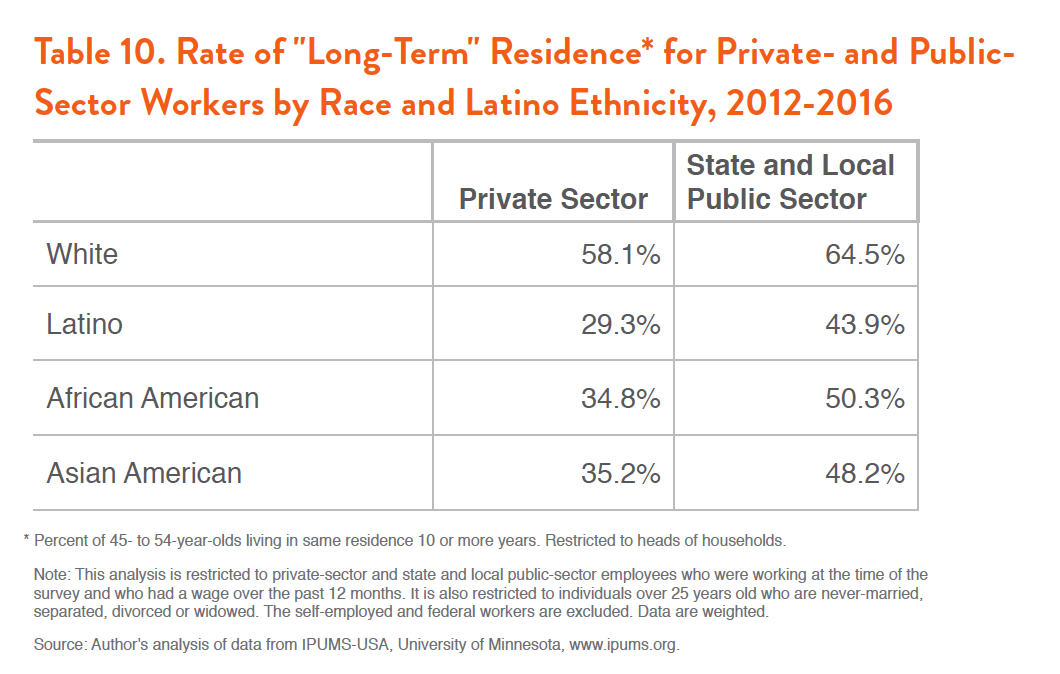 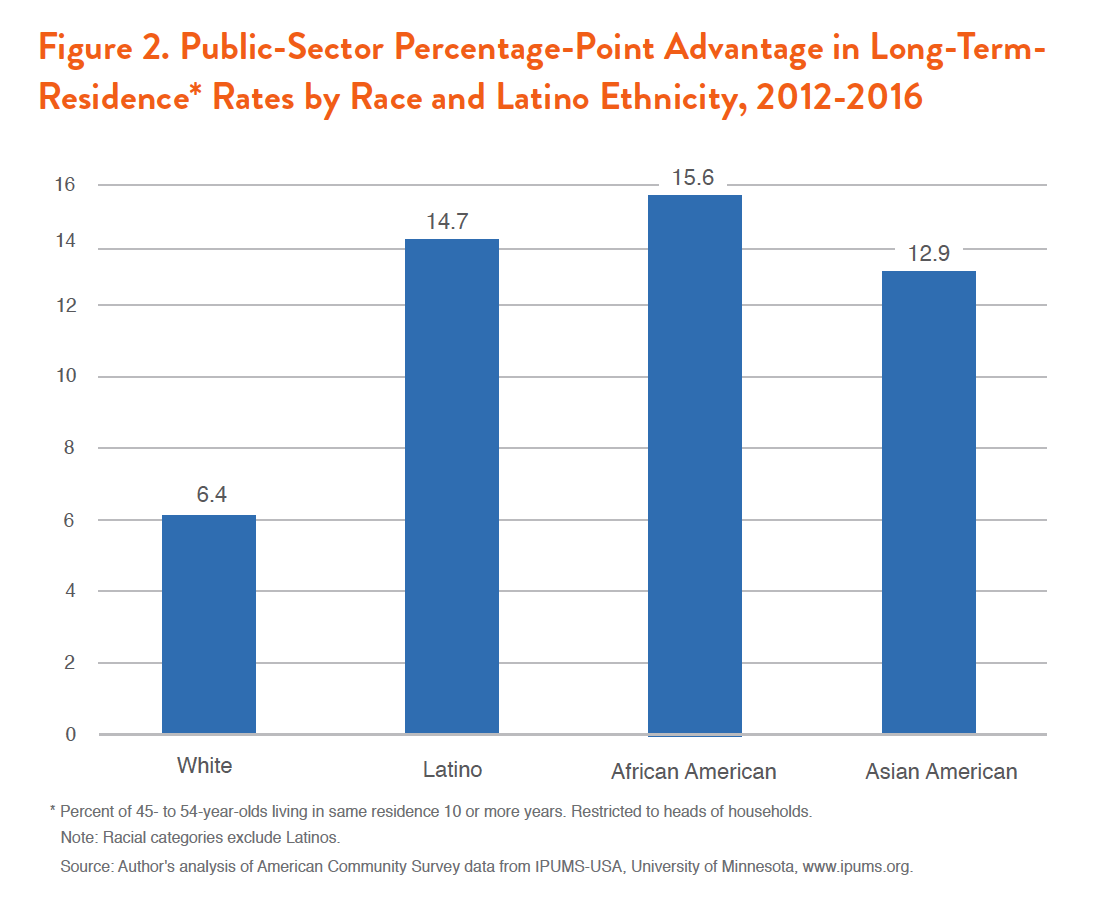 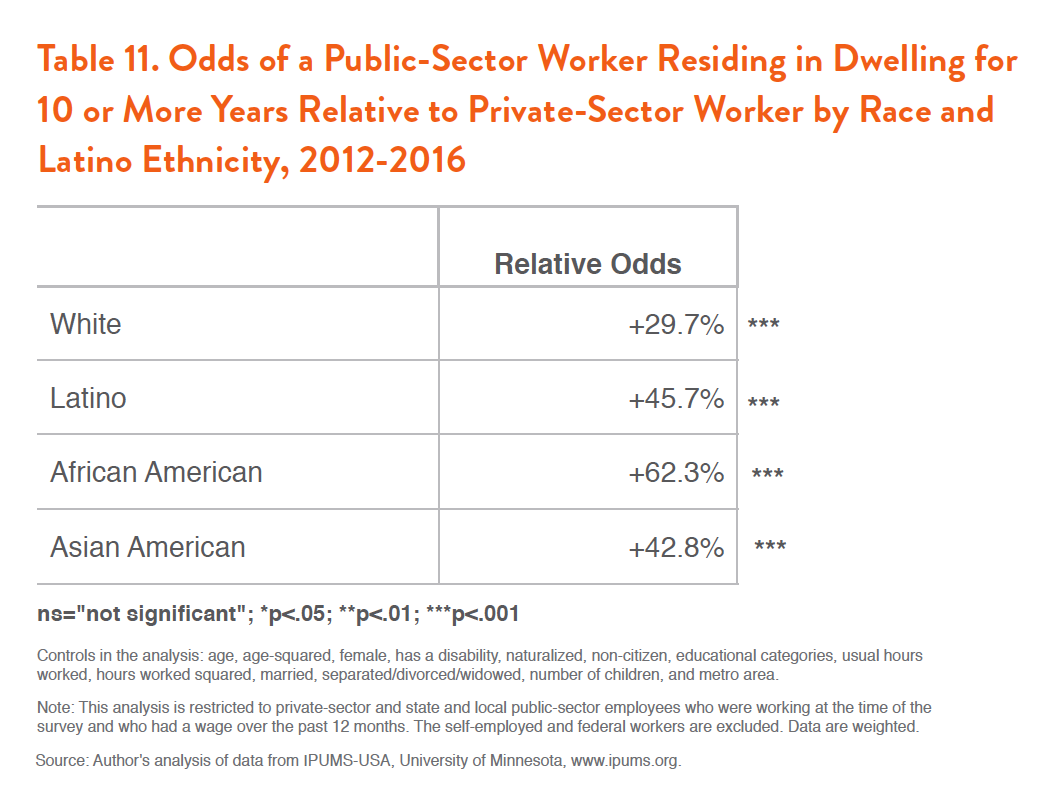 The advantages of public-sector work are not limited to the individual or her family. They also benefit the communities in which public-sector workers live. We can see this benefit more directly by the fact that these workers are more likely to live long-term in their community, and thus help reduce crime, promote neighborhood cohesion, and increase civic participation.

Wage stagnation and increasing economic inequality are 2 of the major challenges of our time for Massachusetts and for the nation as a whole. Policymakers interested in addressing these problems need to preserve and grow public-sector employment. Public-sector jobs are more likely than private-sector jobs to provide the wages and benefits needed to sustain a family. Preserving and expanding them increases opportunities for families of all racial and ethnic backgrounds to move into or stay in the middle class in Massachusetts. Jobs in the public sector also help families build wealth and, with it, longer-term economic security. Workers in the public sector also help communities by fostering neighborhood stability, which reduces crime, builds neighborhood cohesion, and encourages civic engagement. Policymakers need to work to increase wages and benefits in private-sector jobs, so that economic opportunities grow for all workers. The labor policies in the public-sector jobs should serve as a guide for this policy development.

Public-sector jobs promote racial equality. In the public sector, Latino and African-American workers have a much better chance of escaping poverty than in the private sector. The loss of public-sector jobs undermines racial progress.

In an era of increasing economic polarization, public-sector jobs help to preserve and stabilize the middle class. These jobs provide good wages and benefits in a time when too many workers are seeing their wages and benefits stagnate and decline. As gentrification is pushing many families and especially families of color out of communities, public-sector jobs provide families with the economic resources and security that allows them to purchase a home, stay in their community, and strengthen their neighborhood.

Finally, it is important to note that the recent Janus v. AFSCME Council 31 Supreme Court decision was an attack on public-sector unions. An important reason why public-sector jobs are more likely to be good jobs is public-sector unions.23  There is a strong correlation between the decline of unionization and increasing economic inequality.24  The stronger unions are, the better wages are for average workers. Union jobs have also been shown to significantly increase the wealth of white and people-of-color workers.25  If Massachusetts policymakers want to preserve good jobs, they also need to protect and strengthen unions. Without unions, we will likely never be able to reverse the long-standing trend of stagnating and declining wages in Massachusetts.