Poverty Pay and CEO Windfalls: Why Fast Food Is the Most Unequal Industry in the US Economy

Americans are working longer and harder than ever, yet in recent years the gains from economic growth have gone disproportionately to the very highest income earners.1 Working people are left out in the cold, denied their fair share of pay for the work they do. The nation’s most extreme example of inequality is the fast food industry, characterized by windfall gains for top corporate executives and poverty paychecks for working Americans.2 At the same time, fast food and other low-paying service jobs are among the most rapidly growing areas of employment in the country and are projected to be an important source of jobs added to the economy over the coming years.3 Unless the United States takes action to strengthen and more effectively enforce our labor and employment laws, a growing share of the U.S. economy will look like the fast food industry.

Fast food is one of the most unequal industries in the US economy. In 2012, the compensation of fast food CEOs was more than 1,200 times the earnings of the average fast food worker.4 This compares to a CEO-to-worker pay ratio of 543-to-1 for the accommodation and food services sector (which includes fast food as well as other restaurant and hotel categories) a ratio of 304-to-1 for retail and a ratio of 158-to-1 for manufacturing. Pay disparity in fast food is a result of two factors: escalating payments to corporate CEOs and stagnant poverty-level wages received by typical workers in the industry.
Fast food CEOs are some of the highest paid workers in America. The average CEO at fast food companies earned $23.8 million in 2013, more than quadruple the average from 2000 in real terms. In 2013, the highest-paid CEOs in fast food were the ones with the largest stock awards and options exercised. These forms of payment were worth 18 times the value of the CEOs’ salaries. Yet even this measure may undercount executive pay: for example, it is not uncommon for CEOs to draw dividend payments from their share ownership awards, compensation from relationships with private equity firms that have stakes in their companies, or anti-dilution protection in case the value of share ownership changes unfavorably following later issues of stock.
Fast food employees are the lowest paid workers in the economy. The average hourly wage of fast food employees is $9.09, or less than $19,000 per year for a full-time worker. Even at 40 hours a week, this wage would leave a family of three below the federal poverty line. But most fast food workers are hired on a part-time basis, making it unlikely that their annual incomes will even approach that sum. Fast food wages have increased just 0.3 percent in real dollars since 2000. Low fast food wages are significant because 70 percent of the fast food workforce is aged 20 or older, and more than a quarter of fast food workers are raising children.5
Even in an era characterized by a widening gap between executive pay and the income of the average worker, the compensation practices at companies within the fast food industry are extreme. Without federal action to strengthen and enforce labor and employment laws and to rein in CEO pay, the growth of low-paying jobs threatens to make the U.S. economy look increasingly like the fast food industry. 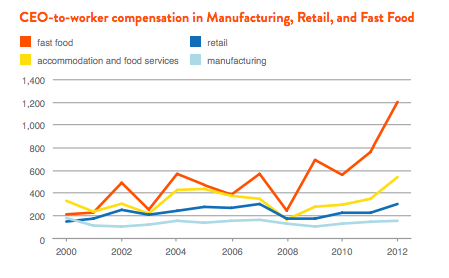