No Recourse: Putting an End to Bankruptcy’s Student Loan Exception

How student loans are treated differently than almost every other form of debt incurred by American households.

In the past two decades, we have gone from a system of financing higher education primarily through public investment, grant aid, and modest family savings, to one in which the majority of graduates take on debt. While a college degree is one of the surest methods of gaining a foothold in the middle class, this reliance on debt has meant that a growing number of students struggle to pay it off—particularly in a still-uncertain economy.

Nearly one-in-seven student loans are in default within three years of a borrower leaving school, and student loans were the only type of debt to see both overall balances and delinquencies rise in the aftermath of the recession.

There is a clear need to reinvest in public higher education, by increasing state support and grant aid in order to reduce the need for undergraduates to borrow. But due to decades of neglect, a growing number of borrowers face trouble repaying the debts they’ve already incurred. Currently, of all federal Direct Loans not currently held by students in school or in a grace period, nearly 7 percent (totaling $42.5 billion) are currently in default1 , and nearly 17 percent of loans in repayment (totaling $58.2 billion) are more than 30 days delinquent.2

Yet another 12 percent of loans (totaling $68.0 billion) not held by students who are currently in school or in a grace period are in deferment or forbearance either due to economic hardship, unemployment, or a borrower’s perceived inability to pay.3 The sheer amount of borrowers struggling to repay loans speaks to a need for failsafe protections for borrowers who clearly cannot meet their debt obligations in a regular or timely manner, if ever.

Where other consumer debt is concerned, such a failsafe already exists in our long-standing legislation and jurisprudence surrounding bankruptcy. But despite the rise in student debt, student loans are treated differently than almost every other form of debt incurred by American households. Due to a series of amendments to the Bankruptcy Code beginning in the mid-1970s, student loans have become extraordinarily difficult to discharge.

While it is not impossible to have student loans forgiven, they are treated far less favorably than most forms of debt. In fact, student loans are treated more or less the same as debts for child support or alimony, tax claims, and criminal penalties. The normal goals of risk-sharing, rehabilitation, and relief for the financially distressed—values that provide the foundation of our bankruptcy laws—are not available to individuals who borrowed money to finance their education.

Instead, an individual seeking to discharge student loans must satisfy an onerous and ill-defined “undue hardship” standard, in some cases effectively making it impossible to discharge loans even in the most hopeless of financial circumstances.4 The barrier is so high that 99.9% of individuals with student loan debt who file bankruptcy do not even bother to allege an “undue hardship.”

There is no sound rationale for applying such an unforgiving bankruptcy standard to federal student loans, particularly in an era where the vast majority of students must borrow in order to get a bachelor’s degree. To simultaneously require that students take on debt while making that debt extremely difficult to discharge is a particularly cruel policy trap.

The need to allow Americans to discharge their debts in times of hardship has been recognized since our nation’s founding. Acknowledgment of the importance of a sound bankruptcy system is enshrined in the United States Constitution which authorizes Congress to enact “uniform Laws on the subject of Bankruptcies throughout the United States.”5 The ability for individuals to move on after a personal tragedy, a failed commercial venture, or the effects of an unexpected recession is necessary for a secure and healthy economy.

This is also not a question of cost. Allowing the most extreme cases of student loan debt to be forgiven in bankruptcy would only cost the government $3 billion, representing only 3 percent of the total amount of loans doled out by the government each year. This is far less than is expected to be forgiven by other relief programs like Public Service Loan Forgiveness and Income-Based Repayment (or “Pay As You Earn”), in service of a policy that is squarely targeted at distressed borrowers.

Allowing Americans to discharge their federal student loan debt in bankruptcy will give Americans still battered by the recession a chance at a fresh start. And it would provide an avenue of relief for older Americans struggling under the yoke of loan debt.

As Figure 1 below shows, over one-third of the $1.2 trillion in student debt—or nearly $420 billion—is currently held by those 40 or older. Older Americans in particular who struggle to pay off loan debt do not have the luxury of decades of future income to repair the damage to their credit or the lost savings and wealth that the debt portended. 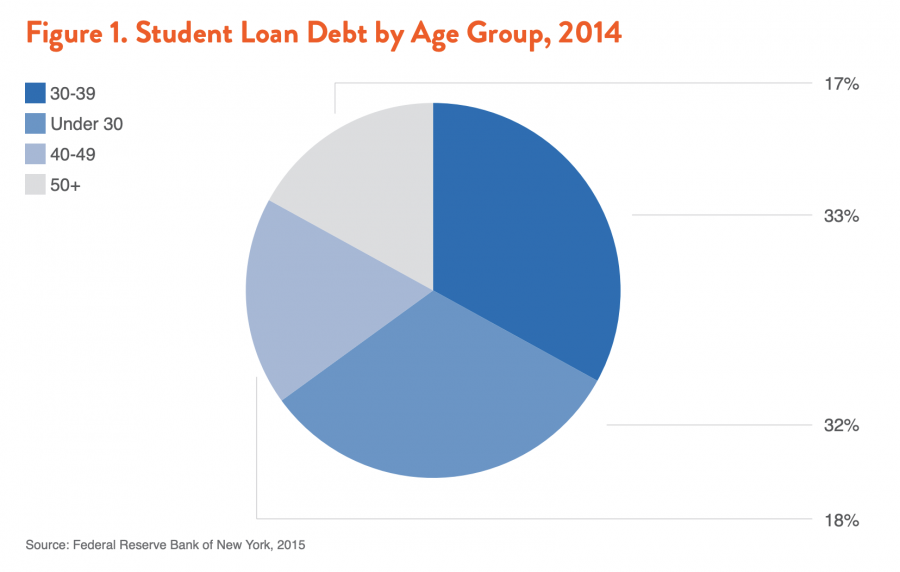 Both as bankruptcy policy and education policy, there is no good rationale for treating student loans more harshly than consumer debts or other unsecured loans. In an era where student loans are a requirement for most students to even access the higher education system, they should not be loaded with penalties and disincentives through the Bankruptcy Code.6

Instead, federal student loans should be dischargeable in bankruptcy under the same standard as other unsecured consumer debt. Or, as now-Senator Elizabeth Warren wrote as a professor in 2007, “[w]hy should students who are trying to finance an education be treated more harshly than someone who negligently ran over a child or someone who racked up tens of thousands of dollars gambling?”7

Doing so would simply be a small step in reducing the burden of student debt, and would not constitute in any way an incentive for reckless or irresponsible behavior, as some have suggested. Even if the bankruptcy code were reformed, individuals with student loans would still have to satisfy the same Chapter 7 “means test” as other distressed borrowers, meaning that discharge would only be available to those individuals who, based on their monthly income and expenses, truly cannot pay their debts. It would simply apply the same last-resort protection on other debts to the increasing ranks of student debtors.

The history of bankruptcy protections in the United States dates back to the ratification of the Constitution,8 and nearly two centuries of congressional action and court rulings established the foundation by which debtors could seek protections from their creditors.

First, during the New Deal and then again in 1978, Congress passed and updated what is widely referred to as the Bankruptcy Code as a modern series of mechanisms for dealing with economic misfortunes often beyond the control of the individual. As explained by the Supreme Court in Local Loan Co. v. Hunt,9 the bankruptcy code was designed to ensure that economic difficulties were not able to spiral into full-blown catastrophes:

[Bankruptcy] gives to the honest but unfortunate debtor… a new opportunity in life and a clear field for future effort, unhampered by the pressure and discouragement of preexisting debt.

Our bankruptcy laws serve a private goal by providing an opportunity for people to get back on their feet and a societal goal by increasing the ranks of people contributing to the broader economy and by potentially decreasing the number of people reliant on public assistance. The need for a fresh start gets to the heart of why the bankruptcy code exists and reflects the fact that individuals should not be unduly penalized for larger economic trends that are beyond their control. The significance of these protections has only been heightened in the aftermath of the Great Recession.

And yet, our bankruptcy laws have failed to account for the rise of student debt, which has ballooned to become the largest pool of non-housing debt held by Americans. Not only has the total student debt portfolio ballooned, but a significant percentage of borrowers have either defaulted or become seriously delinquent on their loans, or sought out protections such as deferment or forbearance (or income-based repayment plans) to lower or delay their monthly payments.

For some, existing protections could be sufficient in giving borrowers time to get back on their feet. But for others, the debt taken on to pay for college will never pan out, due to broader economic trends or a lack of college quality, or simply bad luck. Right now, those borrowers are more or less stuck with their student debt for decades,10 if not forever. Rather than spending decades facing this burden, some would be better off with an opportunity for a fresh start.