Financialization is a major driver of growing inequality and undermines key sources of growth and job creation.

In the three decades after World War II, America became the first predominantly middle-class country in the world and our poverty rate was cut in half. Americans experienced what scholars describe as the “Great Compression.” In this era, real average compensation rose nearly one-to-one with productivity gains;1 the bottom 90 percent of households (in terms of income) enjoyed most of the benefits of growth over the slightly longer period from 1933-1973 (see Figure 1). Inequality of income and wealth in the US was at its low ebb. 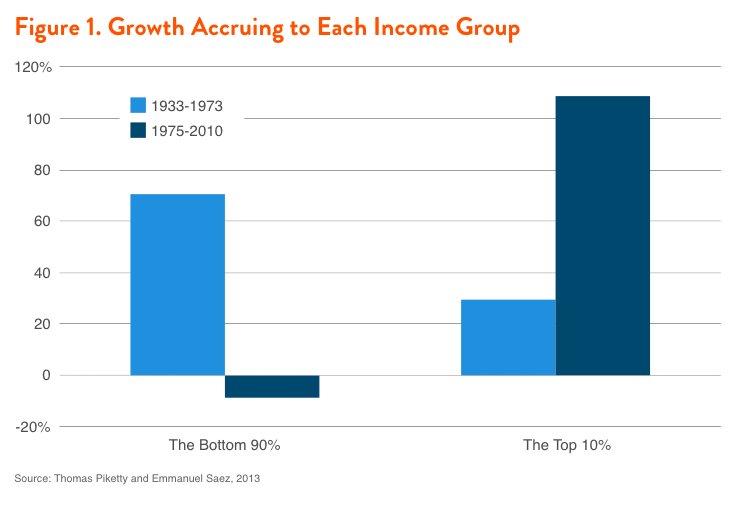 Over the most recent three and one-half decades, the Great Compression has been almost completely reversed. A large majority of households has seen minimal or no real income gains and a substantial minority actually lost ground. Meanwhile a tiny minority of the most affluent households has enjoyed unprecedented income gains, with the richest 1 percent of households capturing nearly 70 percent of income gains between 1993 and 2012 and virtually all of the growth since the Great Recession.2  Today our society suffers from levels of inequality that threaten to surpass even the extremes of the Gilded Age.

Of course, the benefits of the Great Compression were distributed unevenly across racial and ethnic categories. On average, white Americans always fared better. By the early 1980s the wealth ratio of whites to African-Americans was 12-to-1 and the wealth ratio of whites to Latinos was 8-to-1. By 2009, these ratios had increased to 19-to-1 and 15-to-1 in part due to the disproportionate effects of the mortgage crisis caused by the financial sector.3

The coming of this second Gilded Age has coincided with a number of important structural changes in our political economy—today our tax code is significantly less progressive, our higher education system is less accessible and much more unequal and our unions and labor rights are comparatively much weaker in the struggle for a fair distribution of wages.4 These structural changes have been justified as strengthening the private sector to encourage growth—growth that supposedly would lift up middle- and low-income households.

Exactly the reverse has unfolded: the rich have gotten vastly richer, while the majority of Americans have seen no real gains or lost ground. The rationale behind these changes was market-libertarianism and the belief that markets are far more efficient at allocating capital among alternative uses than the government.5  If the 2008 financial crisis did nothing else, it should have taught us that the market is not a freestanding, efficient machine that should be set free to work its magic.

Initially, in the wake of the bank bailouts of 2008, much of the discussion focused on the problem of excessive risk in the financial system, culminating in the Dodd-Frank legislation passed in 2010. More recently, researchers and analysts have raised a deeper set of questions about what is termed the “financialization” of our economy.

Many forces contribute to growing inequalities of income and wealth, but the financial system is the medium through which they work and has become a controlling factor. To illuminate this economic transformation, our analysis departs from previous discussions of financial reform by assessing how the evolution of the financial sector since 1980, and its expanding role in the economy, interact with other forces in the economy so that wealth is no longer cycled into well-paying jobs that raise average living standards and provide security for ordinary Americans. Instead, wealth increasingly grows only itself, for the benefit of a tiny minority of business owners and managers and to the detriment of the non-financial economy of production, jobs, household earnings and real economic growth.

Understanding this is important in a practical sense. Contrary to the market-libertarian views held by a large majority of decision makers today, policies aiming to reduce inequalities of wealth and income may also be more efficient in terms of growth, raising living standards over the long term.

The compounding increase in inequality driven by weak economic growth is a story that leading researchers—most notably Thomas Piketty—see unfolding in the twenty-first century, particularly in the United States.6 Yet, in discussions of America’s growing inequality, we often hear that policies designed to promote greater equality, such as implementing a more progressive tax code, will backfire because they will reduce investment and “shrink the economic pie,” thereby limiting opportunities for lower-income households. Our analysis turns this metaphor on its head by examining how, in fact, the financial system is “shrinking the economic pie” for all Americans while simultaneously channeling nearly all of the remaining growth exclusively to the most affluent among us. Indeed, we argue that financialization is not only a major driver of growing inequality but also undermines key sources of growth and job creation, effectively transforming our economy into something approaching a zero-sum game between financial wealth-holders and the rest of America.

Basic investment patterns provide a window on what is happening. Big businesses have increasingly elected to forego investment of profits and newly raised capital in job-creating enterprise growth and new product lines; instead, they distribute cash assets derived from operating profits to shareholders in share buybacks, reducing claims on remaining assets.7 Small business formation and investment have been shrinking for at least a decade, as is government investment—a critical growth engine in the twentieth-century economy—at every level.8 All of these negative trends are so closely related to financialization that they must be seen as an element of it. Effectively, the real economy is being converted into a servant of passive investment that either exploits or bypasses ordinary workers and households, with a bottom line of more household debt, shrinking labor incomes, diminishing job security and weak employment growth for a large majority of Americans.

Whether and how America addresses this problem is extraordinarily consequential for our society: Current trends, if left unabated, will likely reduce the median living standard of future generations for the first time in American history. Further, as Piketty’s elegant historical model of growth and income distribution suggests, the compounding force of extreme income inequalities will create dynastic wealth, passing between fewer and fewer hands across generations, challenging our fundamental political values.

Public policies can diminish and reverse these trends. However, the near-complete destruction of campaign finance limits under the Roberts Supreme Court does not bode well for winning historically effective political solutions to this problem any time soon, such as taxation of wealth at levels that would make a difference. Thus, reining in financialization, the structure that facilitates inequality, is all the more important. It may also be more politically viable given the range of potential stakeholders, including financial stakeholders, who are losing out in an economy designed to grow Wall Street at the expense of Main Street.