Ensuring Access to the Ballot for American Indians & Alaska Natives

Violations of voting rights, and discrimination and hostility in daily life with some non-Native communities continue today. Poverty and poor educational opportunities are also still serious problems. When considering the issue of voting in national, state, and local elections, some American Indians and Alaska Natives are conflicted between participation in those elections versus loyalty to their tribe and tribal government, including through voting in tribal elections. There are also concerns about maintaining the sovereign status of tribes. Government, candidate or party voter outreach to Native communities is usually spotty at best. 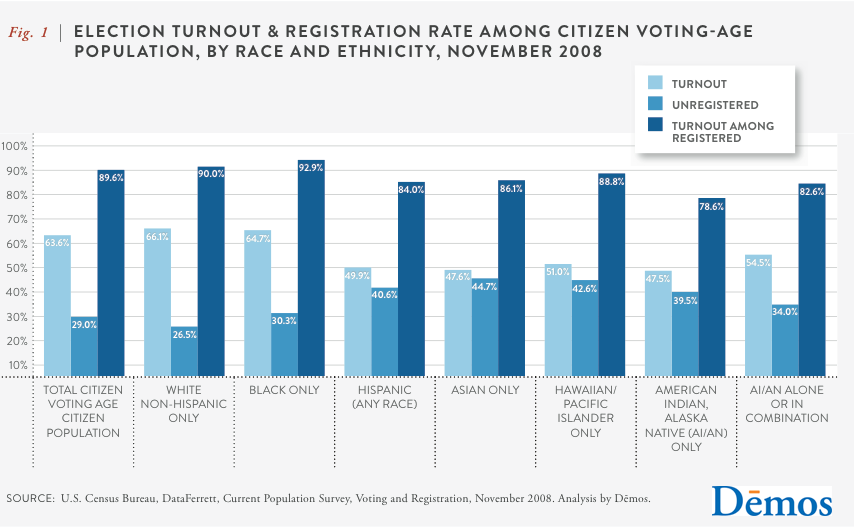 Nonetheless, increasing numbers of American Indians and Alaska Natives are coming to the conclusion that in order to truly have control over their lives and livelihoods, Native people must strengthen their hand in relation to government policy, and part of this must be done through the ballot box. Yet obstacles remain. Although there is a range of cultural, philosophical and historical reasons for low participation rates, challenges in the procedural aspects of voting also present problems for Native would-be voters. One of these challenges is the voter registration system.

The first step the federal government should undertake in this regard is to make the process of voter registration for Native voters easier and more accessible. This can be done through Indian Health Service (IHS), a federal entity within the U.S. Department of Health and Human Services whose facilities are run both by the federal government and the tribes. IHS should assist its clientele to register to vote all year round in a uniform and systematic fashion.

Appropriate IHS facilities should be designated as official voter registration agencies along the same lines as state based public assistance agencies are now designated under the National Voter Registration Act (NVRA).

This would mean that assigned staff at an appropriate IHS facility would provide each client with a voter registration form (in all mandated languages) and the opportunity to fill it out should the client wish to do so. Staff would also assist the client with the form if necessary and then collect and transmit it to the appropriate local election official. We know that with effective implementation this type of system can have an incredible impact. Demos has repeatedly found that voter registration rates rise exponentially when state based public assistance agencies have instituted effective voter registration programs in accordance with the NVRA.