Connecticut’s investment in higher education has decreased considerably over the past two decades.

In today’s economy, a college education is essential for getting a good job and entering the middle class. Yet, despite this reality, college costs are rising beyond the reach of many Connecticutters. State policy decisions have played a significant role in this rise by shifting costs onto students and families through declining state support. Connecticut’s investment in higher education has decreased considerably over the past two decades, and its financial aid programs, though still some of the country’s most expansive, fail to reach many students with financial need. Students and their families now pay—or borrow—much more than they can afford to get a higher education, a trend which will have grave consequences for Connecticut’s future economy.

This brief is based on the Demos report “The Great Cost Shift,” which examines how nationwide disinvestment in public higher education over the past two decades has shifted costs to students and their families. The report outlines how such disinvestment is magnified by rapidly rising enrollments, and its effects are felt particularly acutely as student bodies become more economically, racially, and ethnically diverse. This fact sheet focuses on Connecticut, highlighting the trends in the state’s higher education funding over the last twenty years.

Connecticut’s overall funding for higher education has declined precipitously since its pre-Great Recession peak in 2008.1 Funding per student in the state, although still above the national average, has fallen even more dramatically, since enrollments have risen significantly even as total funding fell. Though state funding for higher education has historically risen and fallen in tune with the business cycle, the post-Great Recession decline appears to be a worrisome departure from the historical pattern. 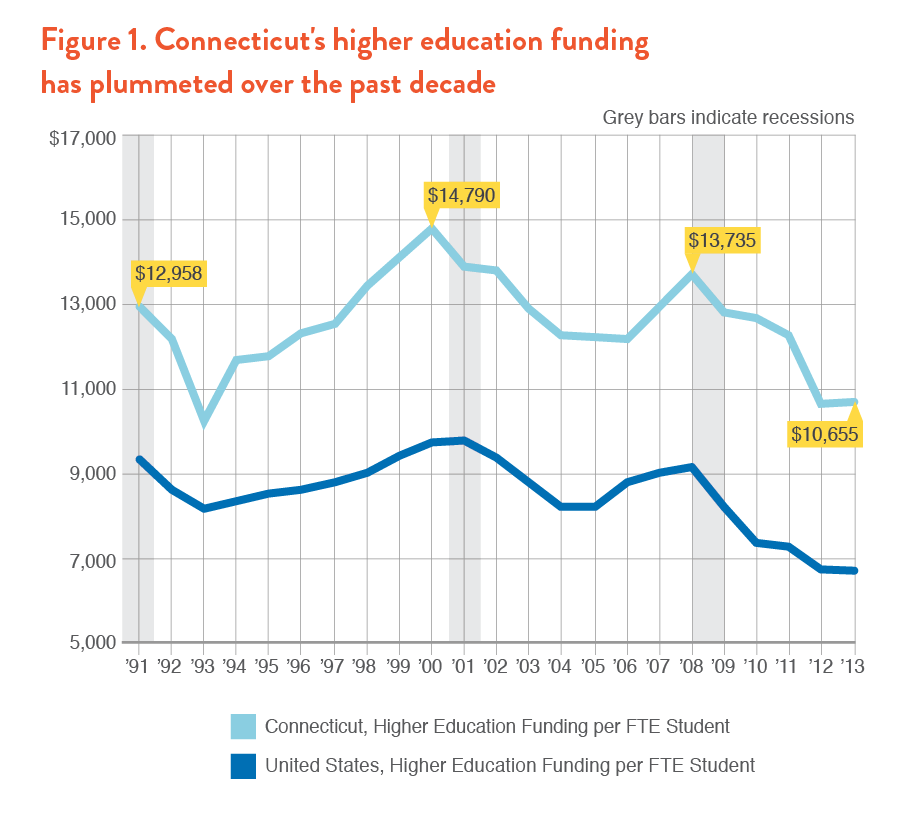 Connecticut’s declining state financial support for its public colleges and universities has translated into higher tuition and fees, making college increasingly unaffordable for the state’s students. 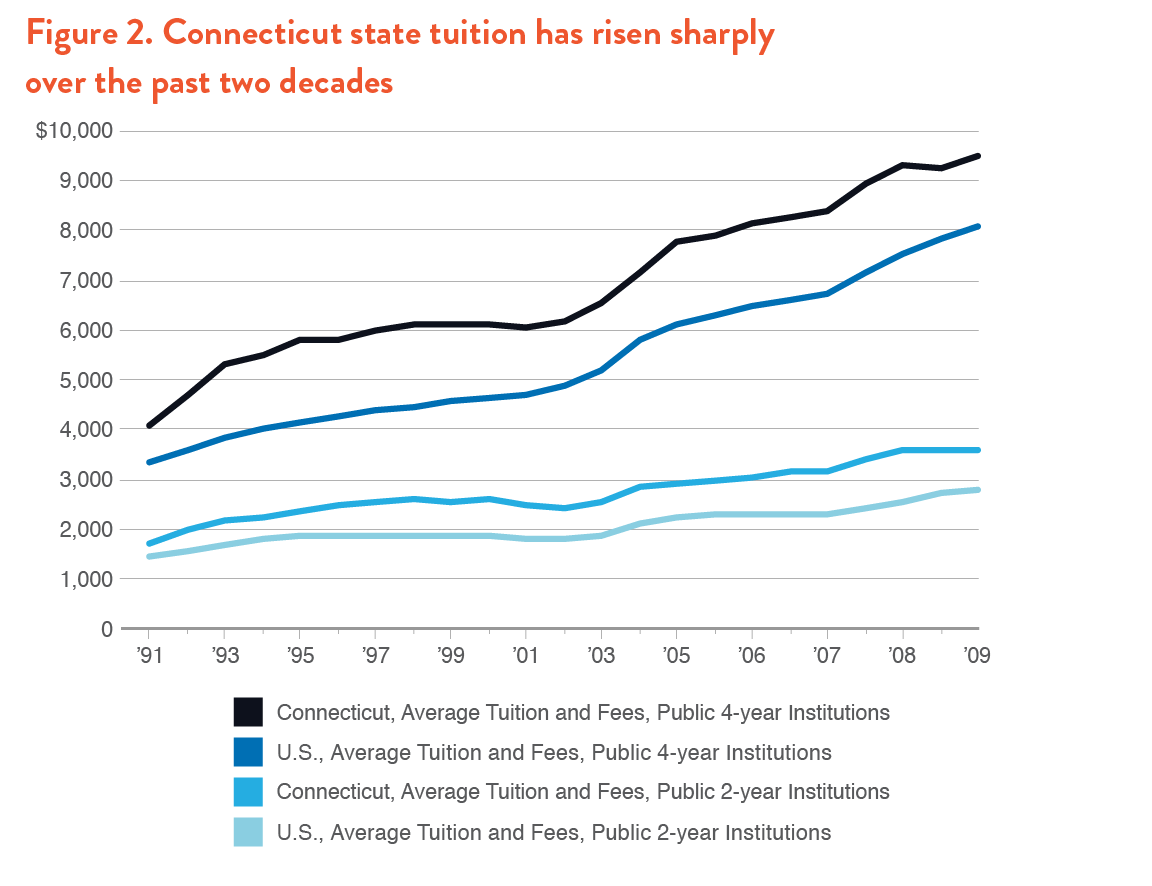 Exacerbating the decline in overall higher education appropriations, funding for Connecticut’s main grant financial aid programs have plummeted since the Great Recession. The average grant has fallen even more precipitously, decreasing its buying power for the 59% of Connecticut students who receive the grants. 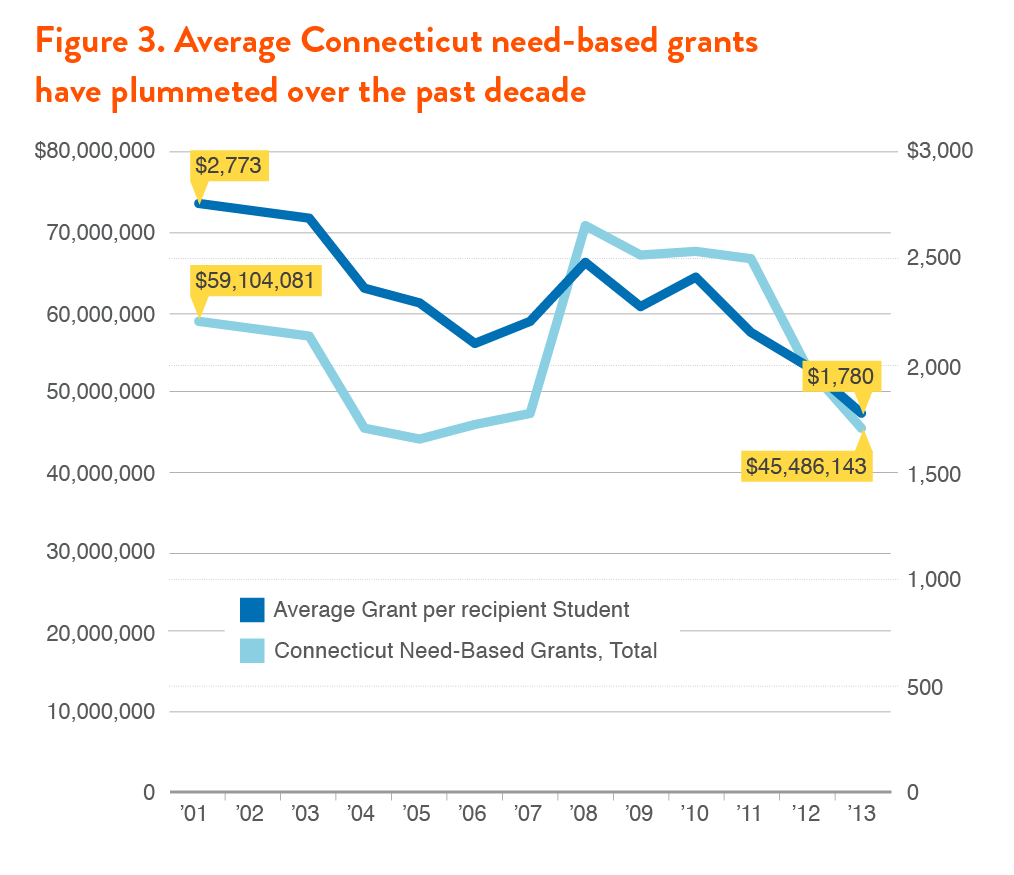 Tuitions have been rising far more rapidly than family incomes, causing the tuition costs to take an increasingly large bite out of family budgets. The increasing unaffordability of a college education in the state combined with the decreasing share of tuition covered by Commonwealth grants have forced Connecticut’s students to borrow more to pay for school. 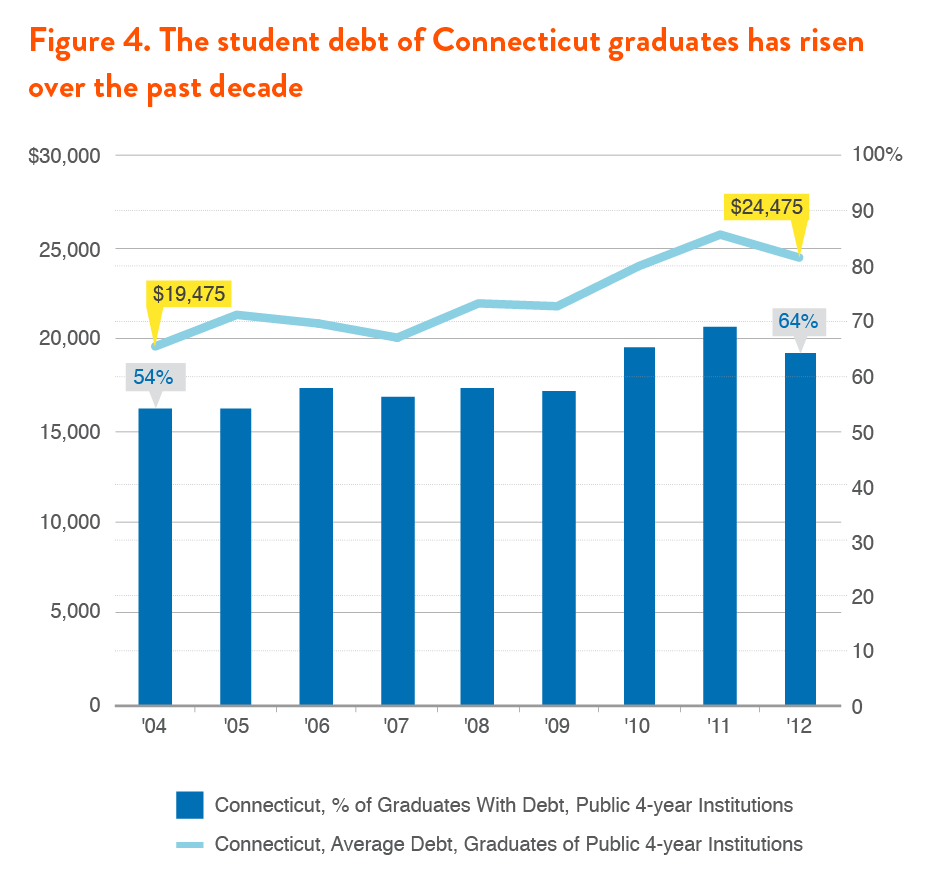 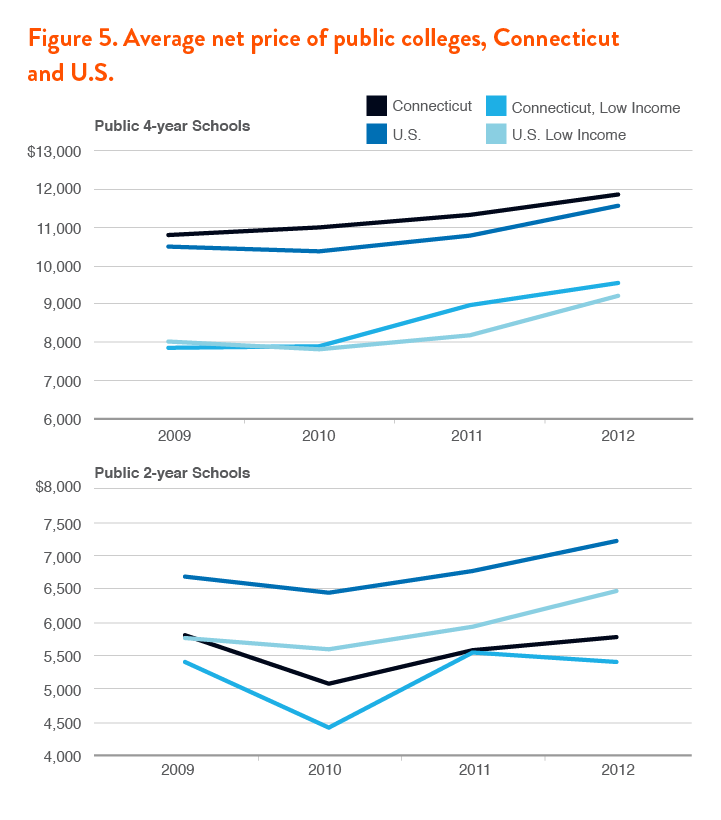 Despite the increasing cost of a higher education, enrollments at Connecticut’s colleges and universities have risen steadily over the past two decades, in part due to the high share of Connecticut’s high school graduates that enroll in college. Graduation rates at the state’s 4-year schools, too, continue to outpace those of the country as a whole. However, one blot on Connecticut’s higher education outcomes is its graduation rate from 2-year institutions, which is well below the national average. 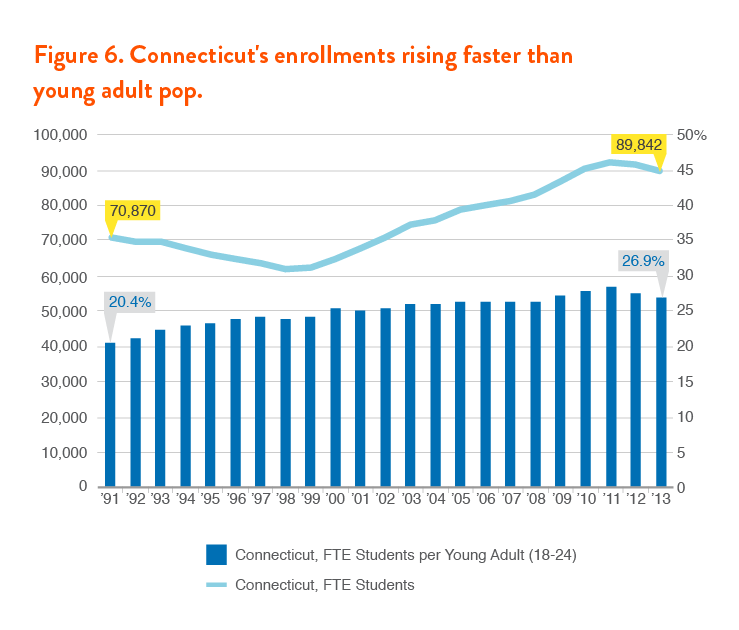 Even though Connecticut’s graduation rates from its 4-year public colleges and universities are well above the national average, they are still too low to meet the future demands of the state’s labor market, which will increasingly require a postsecondary credential. Sixty-five percent of all jobs in the Constitution State are projected to require some sort of postsecondary education by 2018,7 yet just 47 percent of young Connecticutters (ages 25-34) currently have an associate’s degree or higher.8 This share is not projected to improve much in the near future: by 2018, just 49 percent of all working-age Connecticutters are projected to hold a two-year degree or higher, leaving the state with a significant educational gap in its labor market.9 Fortunately, Connecticut can still close this projected gap by taking advantage of our state’s resources to invest in the current and future generations of Connecticutters aspiring to realize the American Dream through postsecondary education.

With recent cuts in state need-based aid, and the ensuing rise in costs for low-income students, Connecticut is endangering the mission of upward mobility inherent in the public higher education system. By increasing need-based aid, Connecticut would be able to offer the promise of affordable higher education to the very groups that are underrepresented in our higher education system—groups that stand to benefit the most from higher education. Even beyond these students, Connecticut is endangering the quality of its institutions of higher learning by spending less per student than a generation ago, threatening the state’s economic competitiveness and the future of its young people. To reverse course, the state will need to commit to bold solutions that can strengthen and stabilize funding for Connecticut’s state universities and colleges, and provide greater financial support to deserving students.