What Is Early Voting?

Early voting provides a means for eligible voters to cast their ballots at a time and location other than in person on Election Day.

Voters can cast a ballot by appearing in person at a local elections office or other designated location during a designated period prior to Election Day.

Voters submit their ballots via mail or by dropping them off at designated locations. Voters simply apply for and receive an absentee ballot in the days or weeks before Election Day. Ideally, absentee ballots are available to any eligible voter, without requiring a narrowly defined reason or “excuse” to obtain and vote an absentee ballot.

Early Voting Is a Cost-Effective Method

For shortening wait times for voting and reducing burdens on polling place officials. It is popular among both voters and election administrators as a means to protect the freedom to vote. Some form of early voting already exists in two- thirds of states.1

The Benefits of Early Voting

Wait times in excess of one hour were not uncommon on Election Day in 2012, and some voters reported waiting in lines for up to four hours.2 By spreading voting over a longer time period, early voting can help relieve the burden of long lines and wait times on Election Day.3 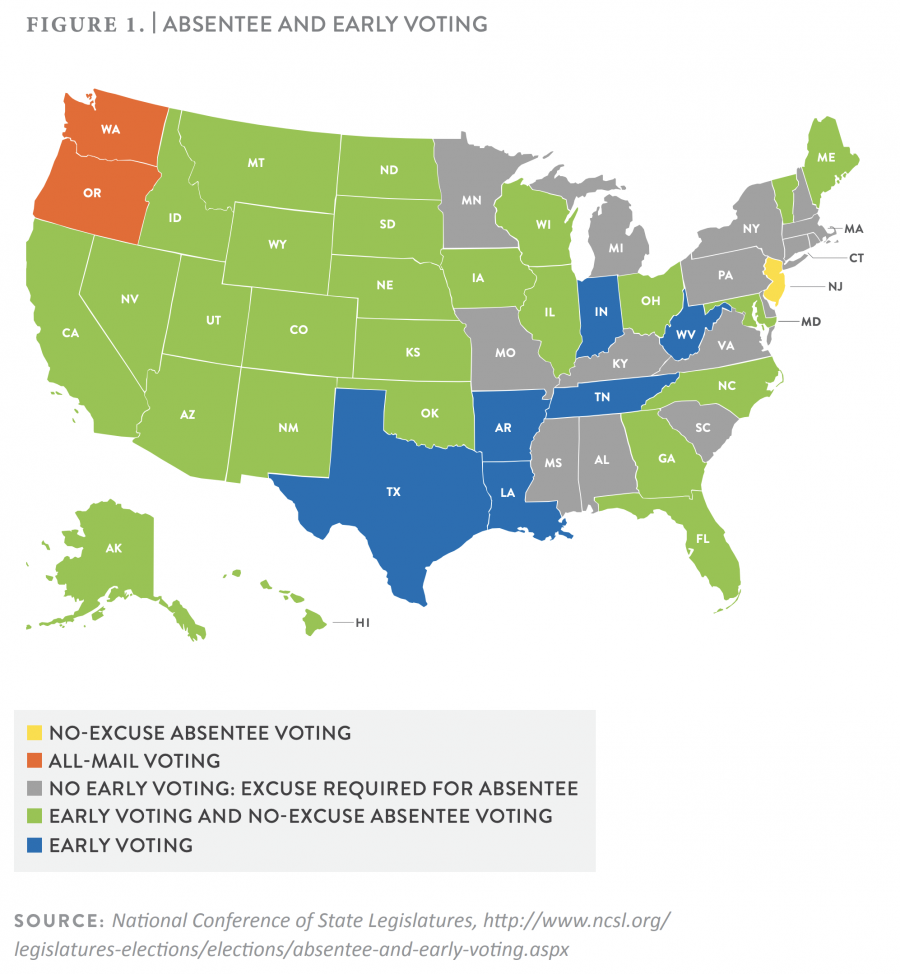 Early Voting Has the Potential to Increase Turnout and Expand the Electorate.

Academics continue to study the impact of early voting on turnout. Nevertheless, usage of early voting has recently surged among traditionally underrepresented voters. The 2008 election marked a dramatic increase in early in-person voting among African American and Latino voters.4 And in Florida, where approximately 50% of ballots were cast early in 2012,5 African-American usage of early in-person voting has exceeded White usage in four of the five most recent federal elections.6 Research suggests that turnout increases are maximized when early voting is combined with Same Day Registration.7

Two-thirds of states now offer some form of early voting, and it is popular in places that have it.8 In nine states, more than thirty percent of voters used early voting.9 Election officials have supported its adoption.10 And following the 2012 elections, elected officials across the country have called for improved access to early voting.11 As President Obama said regarding long lines on Election Day, “we have to fix that.”12

Concerns to Address When Creating an Early Voting System

The number, type, and distribution of in-person voting locations currently vary by state, affecting individuals’ ability to vote early. To ensure that long lines do not interfere with the right to vote, states and political subdivisions must ensure that in-person early voting sites are sufficiently numerous, convenient, and equitably located.

States Should Not Require an Excuse from Absentee Voters.

Some states restrict absentee early voting only to those who can demonstrate narrow categories of “excuse” or cause for not voting on Election Day, such as being entirely absent from the city or county.13 This does not take into account the work schedules and family responsibilities of many citizens. States should permit any registered voter to request an absentee ballot, without limitation (so-called “no excuse” absentee voting).

States Should Ensure Enough Time for Voters to Take Advantage of Early Voting.