NELP
Fact-Sheet-Unemployment-Insurance-Stems-Rising-Household-Debt.pdf
Table of Contents
IN THIS PUBLICATION

Joblessness imposes steep costs on millions of unemployed workers and their families, requiring households to continue meeting basic expenses without their former income.

The Great Recession and limited job growth have produced record numbers of workers who suffer from prolonged periods of unemployment, thus stretching their family finances to the limit. Federal unemployment insurance, which averages less than $300 a week, is often their only form of steady income to cover basic expenses, but it’s not enough. Unemployed families must also cut back on spending, draw on their savings, and frequently turn to credit cards and other forms of borrowing to make ends meet.

New research from Demos shows that a quarter of low- and middle-income households with credit card debt reported that they had accumulated their debt as a result of a job loss. Mounting debt and interest payments can put families behind for years, leading to escalating fees and poor credit. In turn, the debt burden hampers their ability to support the economy with new spending, impairing the nation’s economic recovery. 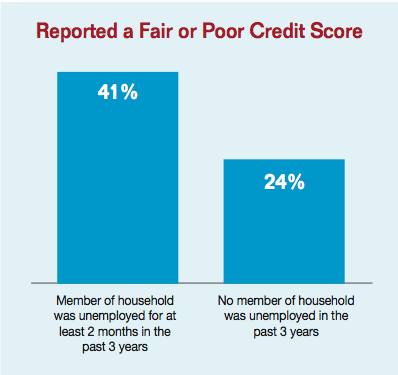 With two million unemployed workers and their families about to lose benefits at the end of the month, Congress should act quickly to reauthorize the Emergency Unemployment Compensation (EUC) program. Without the lifeline of unemployment insurance, many long-term unemployed workers will be forced to dig themselves deeper into debt. Renewing EUC will go a long way toward preventing household debt from spiraling out of control for hundreds of thousands of families.

The facts below include previously unreported data from Demos’ 2012 National Survey on Credit Card Debt of Low- and Middle-Income Households.*

The Demos findings are strongly supported by a 2009 survey conducted by the John J. Heldrich Center for Workforce Development at Rutgers University that documents the financial sacrifices made by the families hit hardest by the Great Recession. Indeed, about one-third of unemployed Americans surveyed reported that they increased their credit card debt and missed credit card payments, which far exceeds the rates for employed Americans. Sixty percent of Americans unemployed as a result of the recession had to borrow from family and friends to make ends meet.

The breadth and depth of the financial pain suffered by unemployed families as a result of the Great Recession cannot be overstated. Federal unemployment benefits provide a critical lifeline for families struggling to make ends meet, avoid falling deeper in debt, and get back on their feet working and supporting the economic recovery.

* In February and March 2012, Demos surveyed a nationally representative sample of 997 low- and middle-income households who had carried credit card debt for three months or more. The overall margin of error for our survey is +/-3.9 percentage points. Some of the data reported here compares the population of indebted households where some member has experienced at least two months of unemployment in the past three years with the population of indebted households who had not experienced unemployment in the past three years. The margin of error between these two populations is 11.7 percentage points.