One of the chief impediments to full voter participation is our unnecessarily cumbersome process of voter registration. Barriers are in place from the very beginning of the process, including requiring citizens to actively register to vote and to continually update their registration each time they move. Above and beyond the requirement to register, most states cut off registration to potential voters in the month just before Election Day.1  This means that eligible voters who do not register under the arbitrarily set deadlines will not be able to vote.

People miss registration deadlines for a number of reasons, including having recently moved or being unaware of the cutoff date. As a result, millions of eligible people are unable to participate in elections. The number of unregistered voters is substantial— in 2012, 25 percent of eligible voters, roughly 51 million Americans, were not registered.2 3 Moreover, even those who do register in advance can find themselves left off the rolls on election day because of mistakes in processing or flawed voter purges.

There is a simple solution that can help increase registration rates, and in turn, voting rates. Same Day Registration (SDR) allows eligible voters to register to vote and cast their ballots on the same day, at the same time. SDR reduces voting bureaucracy by eliminating registration deadlines, allows registration issues to be fixed on site, and modernizes our registration process to better serve our the needs of a busy and mobile society.

Far from being an untested idea, SDR is a tried and true method to fix registration issues and increase voter turnout. SDR was pioneered by Maine, Minnesota, and Wisconsin in the early-to-mid 1970s.4 In the last decade, the number of SDR states has more than doubled from six to thirteen, plus the District of Columbia.5 In just the last five years, Same Day Registration was adopted in California, Colorado, Connecticut, Iowa, Maryland, Montana, North Carolina, and the District of Columbia, though it has recently been repealed in North Carolina.6

These states’ experience with SDR shows that it works. States with Same Day Registration consistently lead the nation in voter participation and the average voter turnout was over 10 percentage points higher in SDR states than in other states in 2012.7 Four out of five of the states with the highest turnout in the 2012 election allowed people to register and vote on the same day – Minnesota, Wisconsin, New Hampshire, and Iowa.8 Overall, nearly 1.5 million Americans used Same Day Registration to vote in the 2012 election.9 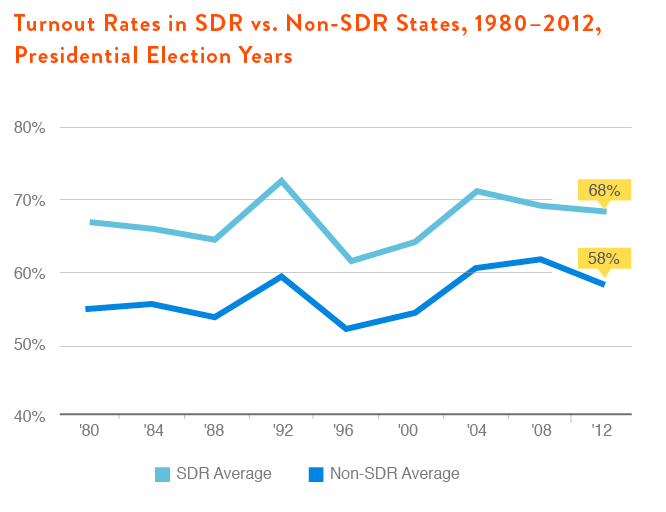 Same Day Registration also offers those who have recently moved an opportunity to register and vote with their new address. Geographically mobile voters, who are often lower-income citizens, young voters, and voters of color,10 are not a small population. Census data shows that over 36 million people in America moved between 2011 and 2012, nearly half of whom had low incomes.11 In addition, young adults of all income levels also move more frequently—for school, for jobs, for family. SDR could increase youth turnout in presidential elections by as much as 14 percentage points.12 It can also increase voter participation among all voters of color,13 as borne out by the experience of North Carolina (see sidebar).

In addition to increasing voter participation and reducing provisional ballots, Same Day Registration is also very cost effective. Iowa and North Carolina reported minimal costs when introducing SDR in the 2008 presidential election.17 The state of Iowa spent less than $40,000 to introduce SDR for its 99 counties.18 North Carolina’s counties cited some additional staffing needs at voting sites as the most notable expense associated with Same Day Registration.19 It is not just newly implemented programs that are cost effective. In a telephone survey conducted by Demos of local election officials in states with the longest experience with SDR- Idaho, Maine, Minnesota, New Hampshire, Wisconsin, and Wyoming- most respondents described the incremental cost of SDR as “minimal.”20 Whatever costs arose were offset by savings from reducing the number of provisional ballots needed and reducing staff costs associated with last-minute processing of registrations just before the pre-election deadline.21

Finally, the use of SDR does not compromise the integrity of our elections. States offering SDR report that existing fraud-prevention measures ensure the integrity of elections,22 and elections officials familiar with SDR strongly endorse it. Mark Ritchie, Minnesota’s long-time Secretary of State said, “Election Day Registration is much more secure because you have the person right in front of you­—not a postcard in the mail. That is a no brainer. We [Minnesota] have 33 years of doing this”23 Debbye Lathrop, the County Clerk in Laramie County, Wyoming said, “I think Election Day voter registration gives every citizen the greatest opportunity to participate in the greatest right that they have been provided.”24

Unfortunately, the attack on voting rights has included attempts to dismantle this successful tool for political participation. Conservative political leaders in several states have moved to repeal Same Day Registration in recent years.25  Voters in Maine defeated repeal efforts in 2011. An SDR repeal bill was vetoed by Montana’s Governor Schweitzer in 2011, but the legislature has placed an SDR repeal question on the ballot in November 2014.

As part of its recent rollback of voting rights North Carolina ended its highly successful Same Day Registration program, in addition to enacting a strict photo ID requirement (e.g. no student ID), shortening the early voting period, and eliminating pre-registration for 16 and 17-year-olds.26  This was widely seen as an attempt to stymy increased participation by voters of color—41 percent of North Carolinians who used SDR to register and vote in the 2012 elections were African Americans, though blacks represent just 20 percent of the voting age population.27

To maximize voter participation gains, Same Day Registration should be available at all polling places and should be offered during the early voting period and through Election Day.

States have developed common-sense ways to organize the polling place to accommodate Same Day Registration efficiently and effectively. In particular: