Millions to the Polls: The Right to Vote for Formerly Incarcerated Persons

Prohibiting citizens from voting defies our democracy’s principle of one person, one vote. Yet across the country nearly six million citizens have been stripped of their right to vote due to prior convictions, even long after they have completed serving their sentences.1 The vast majority of these individuals, 75 percent, are no longer incarcerated and live in their communities without the ability to fully participate.2

The U.S. has the highest rate of incarceration in the world.3 Currently, over two million individuals are incarcerated—an increase of 500 percent over the past 30 years.4 Laws that permanently strip these individuals of the right to vote means that even more of our citizens will be denied the freedom to vote in the years to come.

Stripping formerly incarcerated individuals of the right to vote has a long and ugly racist history. Felony disenfranchisement laws have been used as a means to restrict political power. In the wake of the Civil War, felony disenfranchisement was enacted in part as a reaction to the elimination of the property test as a voting qualification. These laws served as an alternate way for wealthy elites to restrict the political power of those who might challenge their political dominance.5

Beyond disenfranchising poorer individuals, in the period following Reconstruction, several Southern states specifically tailored their disenfranchisement laws in order to bar Black male voters by targeting offenses believed to be committed most frequently by the Black population.6 For example, Alabama’s provision disenfranchised a man for beating his wife, but not for killing her because the author estimated, “the crime of wife beating alone would disqualify sixty percent of the Negroes.”7

Almost every state in the U.S. takes away the right to vote from citizens convicted of felonies. Maine and Vermont are the only states that allow people currently incarcerated to vote.11 Once individuals have completed their sentences and are out of prison, however, most states continue to withhold the right to vote for ex-felons, as seen in the chart below. Thirty states do not allow persons on probation from felony convictions to vote and 35 states do not allow persons on parole to vote.12 Thirteen states continue to disenfranchise people even after they have successfully fulfilled their prison, parole, or probation sentences Alabama, Arizona, Delaware, Florida, Iowa, Kentucky, Mississippi, Nebraska, Nevada, Tennessee, Virginia, Washington, and Wyoming.13 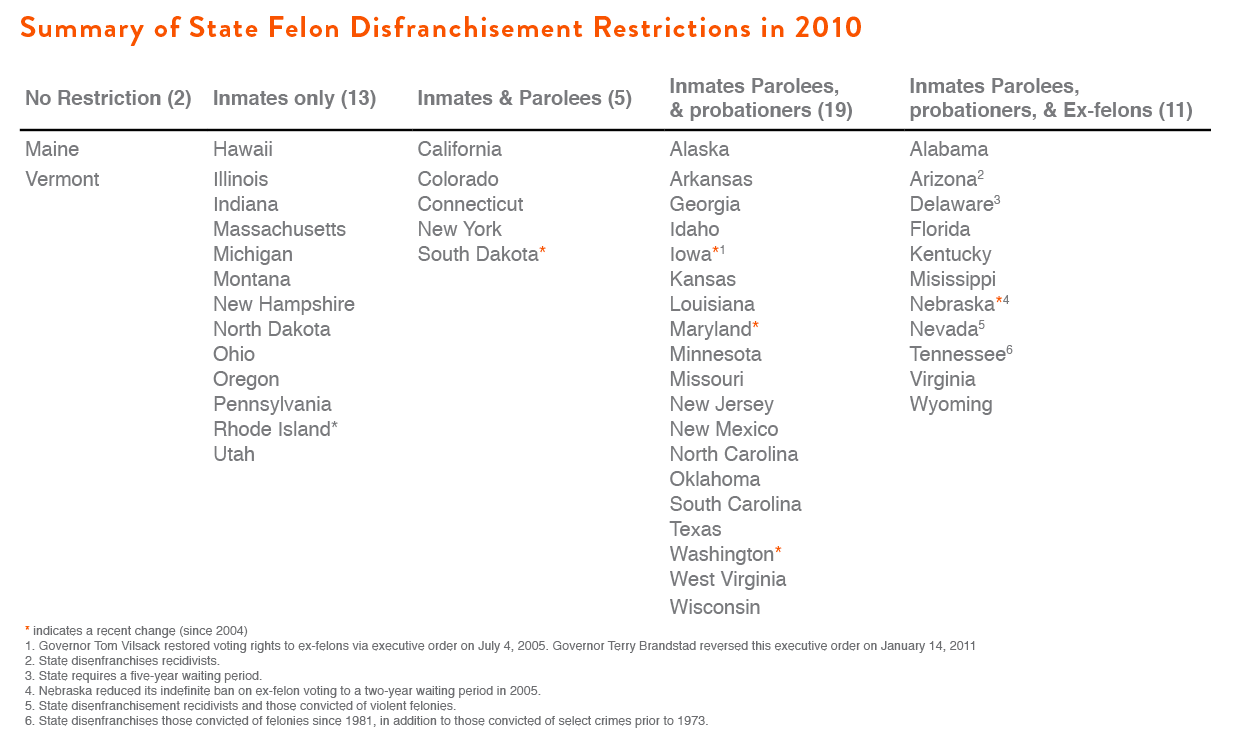 Restoring, or better yet never removing, the right to vote for formerly incarcerated individuals would result in millions of voters being brought back into the electoral system, further strengthening our democracy, and helping to restore political representation to disenfranchised communities.The number of disenfranchised voters runs into the millions, in an era when electoral outcomes can be affected by tiny margins. For example, in 2000, the Presidential election was decided by only 537 votes in Florida, a state that, at the time, had one of the most restrictive disenfranchisement laws.14 As a result, an estimated 600,000 individuals who had fully completed their sentences were ineligible to vote, nearly 1,000 times the winning margin.15 There is no way to know how many of the 600,000 would have voted and who they would have voted for, but it is clear that it could have had a significant impact on the national election.

Prison-based gerrymandering gives people who live near large prisons extra influence at the expense of voters everywhere else, undermining the one person, one vote principle of the 14th Amendment. It also creates incentives for elected officials to increase the incarcerated population.

For example, upstate New York has been steadily losing population.20 In the 2000 Census, almost one-third of the persons credited as having “moved” into upstate New York during the previous decade were people sentenced to be incarcerated in upstate prisons. While counted for redistricting purposes, these “new residents” cannot vote and cannot interact in other meaningful ways with the cities and towns where they are incarcerated – they cannot shop, eat at restaurants, buy or rent homes, use public transportation, or engage in any of the normal activities of an actual resident of the prison town. But as long as incarcerated persons are counted for redistricting purposes, it creates an incentive for elected officials to increase the incarcerated population in order to keep their seats or offices, rather than risk losing a seat due to a population decrease.

Fortunately, states and localities are working to end prison based gerrymandering. New York, Maryland, Delaware and California have passed legislation to use state correctional data to ensure districts are drawn on data that counts incarcerated people at home.21 New York and Maryland have successfully defended their plans in court and implemented this reform in drawing their districts following the 2010 Census; California and Delaware will implement their reforms for the redistricting following the 2020 Census.

The legislative or executive branches in several states (Virginia, Colorado, New Jersey, Mississippi) require or encourage local governments to modify the census and refuse to use prison populations as padding. More than 200 rural counties and municipalities around the country make these adjustments on their own.

On the federal level, the Census Bureau changed its 2010 data publication schedule to make it easier for states and localities to identify prison populations in the Census redistricting data.22 However, states must rely on their own data to assign prisoners to their proper home districts, and the new release was not early enough for every state to benefit. Moving forward, the Census Bureau should change its “usual residence” rule to count incarcerated persons as residents of the community where they resided prior to incarceration.23