Millions to the Polls: Provisional Balloting

The scenario occurs regularly on Election Day: a voter will show up at the polling place only to find that his or her name is not on the voting rolls. Sometimes an incomplete registration form is to blame. Other times, people have moved since registering and may show up at the wrong polling place. But in many cases, processing errors by election administrators, overly aggressive purging procedures, or other mistakes outside of the voter’s control result in the voter being mistakenly left off the voting rolls.

Under the Help America Vote Act of 2002 (HAVA), voters whose names cannot be found on the voter rolls on Election Day or whose eligibility is challenged must be provided a provisional ballot.1 These provisional votes are subsequently counted if local election officials are able to verify, by a set deadline, that the individual is a legitimate voter under state law.2 The Presidential Commission on Election Administration found that “high rates of provisional balloting can . . . lead to longer lines, as voters and poll workers attempt to address confusion regarding a voter’s registration status and to provide the appropriate ballot. . . . States that require large number of voters to cast provisional ballots slow down the voting process.”3 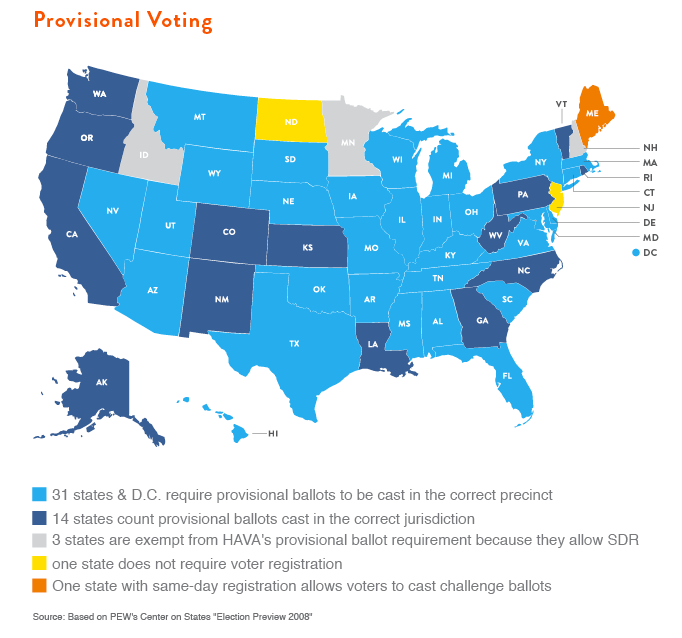 In the 2008 election, four states accounted for two-thirds of all provisional ballots submitted nationally—Arizona, California8, New York and Ohio.9 These states, in particular, would benefit from reforms such as same day registration, to decrease the number of provisional ballots cast.

The map below shows the breakdown of the percentage of provisional ballots that were counted by state in the 2008 election. 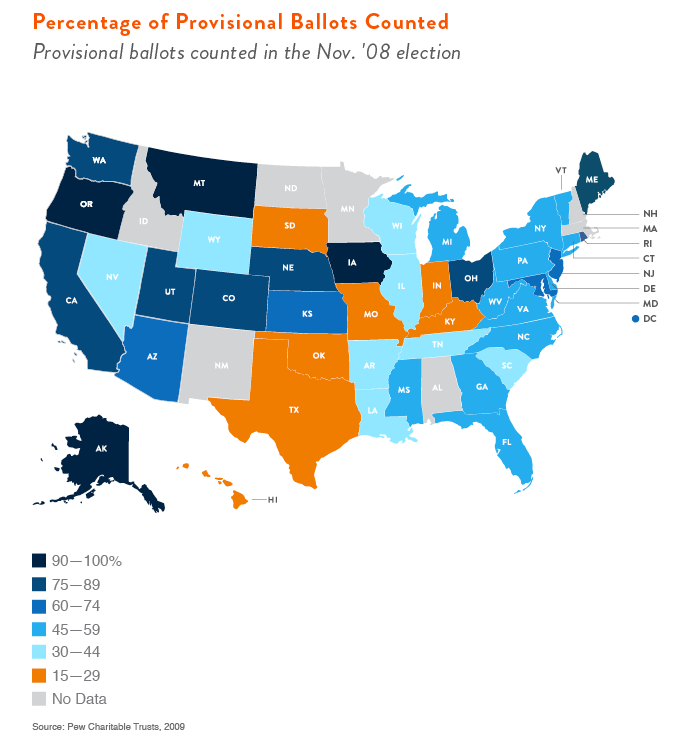 While provisional ballots are intended to be a safeguard, the high rate of disqualified provisional ballots in many states suggests that the use of provisional ballots should be as limited as possible, and states should instead implement procedures that will allow as many voters as possible to cast a regular ballot at the polls. Ideally, measures such as Same Day Registration should be implemented to allow eligible voters to simply re-register at the time of voting, and cast a regular ballot that will be counted, if an eligible voter encounters any questions about the voter’s registration at the polling place.